French toast is a breakfast favorite. If you make it homemade, dipping the bread in egg before frying it on a skillet, you get a little protein boost from the eggs, which makes French toast a slightly more filling meal than other carby options such as traditional pancakes or sugary cereal. Still, French toast typically isn’t as filling as other breakfast go-tos such as eggs or yogurt.

If you like bready breakfasts but want a protein boost without having to fry up a side of fatty bacon or sausage, Aldi has a few options. The discount grocer sells a protein pancake and waffle mix year round, and they also sell protein waffles occasionally as a limited-timed special. 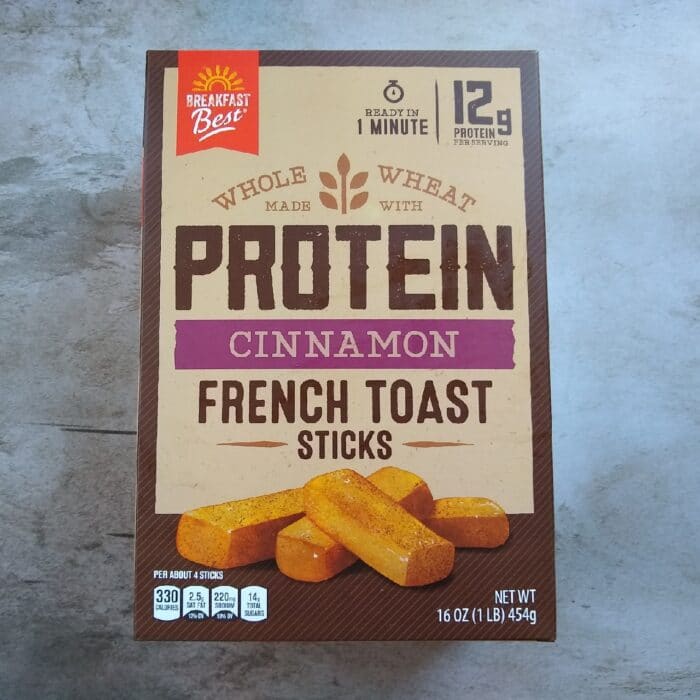 These are an Aldi Find (Special Buy), which means they’re only in stores for a short time. Aldi does not offer online ordering for its specials, so once these sell out at your local store, they’re gone.

These are made with whole wheat bread, and their protein is primarily from whey protein isolate. The box states they contain bioengineered ingredients.

These contain 12 grams of protein per 110-gram serving. In comparison, a 90-gram serving of traditional Kellogg’s Eggo French toast sticks has just 4 grams of protein. At 14 grams of added sugars per serving, though, be aware that these aren’t the healthiest breakfast food. (See complete nutrition info below.)

If you’re looking out for allergens, these contain soy, wheat, egg, and milk.

These can be prepared in the microwave or in a conventional oven or toaster oven.

To microwave, place French toast sticks in a single layer on a microwave-safe plate. Microwave on high for approximately 1 minute for four sticks.

To bake in a conventional oven or toaster oven, preheat the oven to 350 degrees Fahrenheit. Place sticks in a single layer on a shallow baking sheet. Bake for approximately 4 minutes, turn sticks over, and bake an additional 4 minutes.

I opted to prepare my French toast sticks in the air fryer because I was baking some Aldi breakfast meatballs in my oven. I set the air fryer temperature to 350 degrees and cooked for 4 minutes, shook the basket, and cooked another 4 minutes. They didn’t seem quite done, so I cooked them for an additional 3 minutes. I cooked the entire box in my air fryer, which isn’t very large, so the fryer basket was full and that might be why I needed a little extra cooking time. 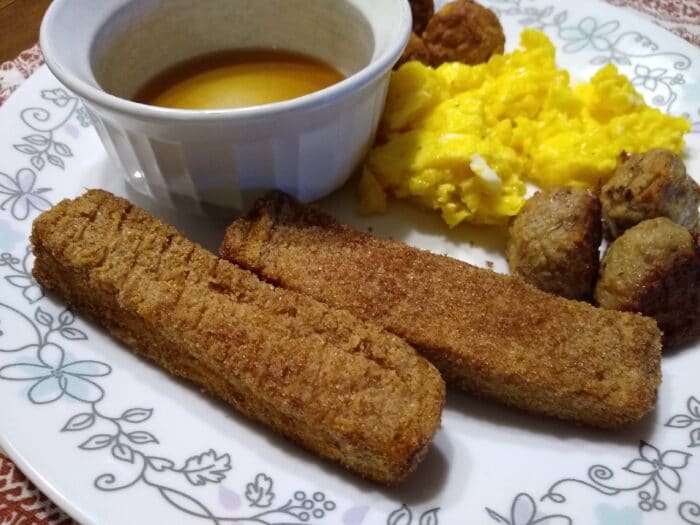 The French toast sticks after heating.

My family enjoyed these French toast sticks with maple syrup alongside the aforementioned breakfast meatballs and some scrambled eggs, and there were almost no leftovers. 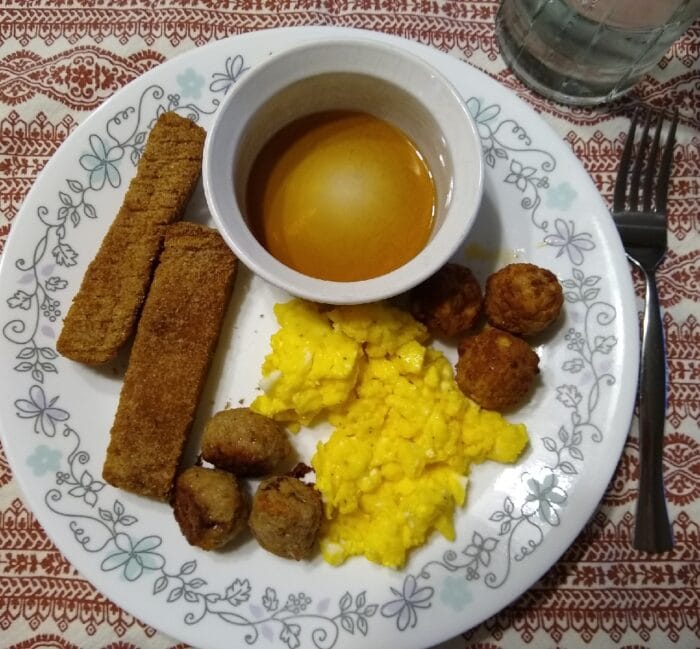 The sticks have a thick cinnamon and sugar coating and came out of the air fryer crisp on the outside and soft on the inside. While they have a good cinnamon flavor, I don’t think the interior is as flavorful as Aldi’s regular French toast sticks, but no one in my family complained. Overall, these were a success.

Breakfast Best Protein Cinnamon French Toast Sticks contain 12 grams of protein per serving and have plenty of cinnamon flavor. They heat easily in the microwave, oven, toaster, or even an air fryer. If you like French toast but want a protein boost to keep you feeling full until lunch time, these are worth a try.