When talking with other Aldi shoppers about the store, there are some things that rarely come up in conversation. We don’t typically talk too much about milk or eggs (other than perhaps briefly raving about how low the prices are) because they’re normal shopping items and we take for granted that Aldi does them just fine. But when I bring up “the” bacon wrapped filet … well, that’s another conversation entirely. Most Aldi shoppers I know have at least seen the little thing, and if they haven’t tried them, they’ve certainly been curious. It’s got an aura all its own.

A lot of the curiosity stems from the fact that a single filet is just a couple of dollars. At such an absurdly cheap price, is it any good? 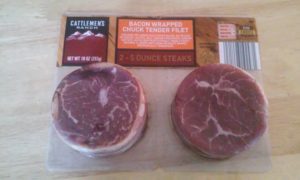 The Cattlemen’s Ranch Bacon Wrapped Chuck Tender Filet is, as far as we can tell, a Regular Buy, appearing in the store most parts of the year, if not all. Depending on your Aldi and time of year, it comes either in a single pack, a two-pack, or a larger pack of several. Oddly, we’ve found that the single pack is actually the best deal, although that may vary from location to location.

Chuck steaks are really at the bottom of the steak hierarchy, so going into this we knew it wasn’t going to be a filet mignon, especially not at this price. Still, we weren’t sure what to make of the ingredients list. Unlike some of Aldi’s burgers, which boast beef as their only ingredient, the bacon wrapped filet’s ingredients list is a bit long and not altogether comforting. Some of that may be accounted for in the bacon, but we’re not quite sure, and the packaging doesn’t bring any clarity. The steaks come in a round plastic shell with a flimsy plastic lid that you cut open with a knife. Inside is a small 5-ounce filet, packed in a strange liquid and surrounded by a strip of bacon.

The cooking instructions on the filet are, like most beef, a bit on the vague side, so you’d be well advised to bring a digital instant-read thermometer to the party if you intend to cook these without spilling out all the juices. Although small, it’s fairly thick, so expect to spend about 15 minutes on an open grill to get it to about medium (or less for rare, or more for well-done).

We’ve made the filets many times with different approaches. In most cases, the beef is a little on the chewy side and doesn’t have a lot of taste without some pre-seasoning. For our latest experiment, we followed the advice of a professional chef we know and covered the filet in salt, pepper, and olive oil, allowing it to sit in room temperature for an hour. We cooked it on high heat over an open grill, covering the grill only for a few minutes at the end to make sure it was cooked through. With help from a digital thermometer, our steak came out right around medium or so.

This was about the best we’ve ever made the filets — the meat was cooked but tender, pink but not bloody. And the salt and pepper adds a decent amount of seasoning that works well with the bacon. The reality, though, is that this is just not high quality beef. Even under the best of circumstances, it tastes chewy and doesn’t have the refined taste of higher-quality cuts. (We’ve purchased other steaks from Aldi and they’ve been fabulous.)

Some people would point out that this is a cheap steak, and they would be right. But with Aldi, we’ve often discovered that high quality can be had on the cheap. Be aware that this is not necessarily one of those cases.

At around two dollars per filet, the Cattlemen’s Ranch Bacon Wrapped Chuck Tender Filet is about what you pay for. Even with proper pampering, this is still a cheap-quality meat that is on the lower end of taste and texture. We wouldn’t recommend trying to build a party menu around it, but if you’re a carnivore wanting a budget grilling experience, you can’t beat the price. If, on the other hand, you want a more gourmet entree, consider some of Aldi’s more premium steak offerings.