Last week we wrote a review of the incredibly cheap Cattlemen’s Ranch Bacon Wrapped Filet, which we discovered was about as good as the price suggested … and had an ingredients list we’re still trying to make sense of.

This week’s steak is bit different. It has one ingredient (hint: it’s not chicken) and bears the label of top sirloin. Most consumers won’t know a lot about the difference among steak cuts, but top sirloins are seen as better than chuck and not quite as good as ribeyes: a sort of “value” steak, if you will. 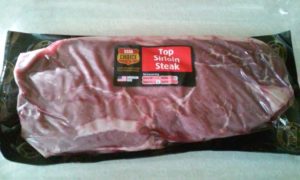 The one we got from Aldi is about $6 a pound, which we found to be competitive — and maybe a bit lower — than the local grocery chains. Some people claim that Aldi steak prices aren’t always the best deal in their area, so we recommend doing some price shopping.

In any event, the Top Sirloin doesn’t have much in the way of instructions, other than a warning to cook to 160 degrees, which would be the final temperature consistent with a medium steak. The beef cut we purchased also boasts being from the USA.

We cooked it much as we did the Cattleman’s Ranch Bacon Wrapped Filet: we coated it in olive oil, seasoned it with salt and ground pepper, then let it sit at room temperature for an hour. Then we put it on the open grill at high heat, covering it only toward the end to help it cook through. We used a digital thermometer, with our goal being a medium outcome.

Overall, the steak came out well. It’s not a top-shelf steak — it’s not as tender as a tenderloin or ribeye, for example — but it does the top sirloin impression just fine, especially with some salt, pepper, or other seasonings.

Also, while we cooked it up strictly as a grilled steak, top sirloin is also workable in other ways. Aldi’s website even has a possible recipe.

If you want a value steak, the top sirloin is a viable option. It’s not top-of-the-line — it’s a little less tender than Aldi’s ribeye — but delivers good value for $6 a pound. And, just as importantly, it’s priced well compared to top sirloins at other grocers. Recommended.