We’ve put a lot of Aldi red meats through the paces this year. We’ve profiled the bacon-wrapped chuck filet, the top sirloin, and our personal favorite, the ribeye. (We’ve also reviewed some of Aldi’s burger lineup.) In this post, we turn our attention to another component of the Aldi beef lineup: the strip steak. 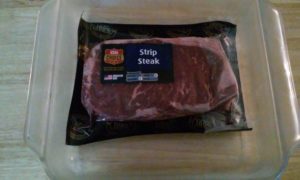 The Aldi strip steak bears the same USDA Choice branding that some other Aldi steaks do. It comes in the same sealed packaging, and runs about $6 or so a pound — close to the same price as the top sirloin. We think this is a pretty competitive price, but — as we always say — you would be wise to price-shop your local Aldi beef prices with other grocers.

Strip steaks are seen as desirable steaks because they are naturally fairly tender, but they don’t flare up as much on the grill as fattier steaks like a ribeye. A ribeye is generally a more tender cut once cooked, but if you’ve got a grill prone to flare-ups, this is a no-nonsense steak for those meat-and-potatoes meals.

Unlike some of our previous steaks, we didn’t cook this strictly as a steak dinner. Instead, we cooked it up for the purposes of fajitas — using a recipe from Aldi’s site, in fact — marinating the steak in a concoction of spices before tossing it onto the grill. Once cooked, we cut it up and combined it with an assortment of ingredients in a flour tortilla.

Our experience? It’s a good cut of meat. Reasonably tender with a good flavor, this cut is about all you could ask for. We thought it went particularly well as a fajita filling, although we should also add that it’s a bit tougher than a ribeye. It’s also cheaper than a ribeye, too, and we thought it compared favorably to the top sirloin, if not better.

The USDA Choice Strip Steak is a solid, if unspectacular, entry in the lineup of Aldi steaks. Falling in the midpoint between the dubious chuck filet and excellent ribeye, the strip steak is worth considering if you need a moderately tender cut without the ribeye’s flare-ups. It’s also a good choice for recipes, like fajitas, that call for cuts like this one. Recommended.