One thing Aldi doesn’t lack for in variety is cheese. It carries sliced cheese, string cheese, and shredded cheese. Over in the Special Buy section, you can even sometimes find upscale-looking cheese wedges.

But we’re not going to look at those here. We’re instead going to look at cheese blocks that inhabit the Regular Buy section. All of them carry the Happy Farms label. We love all of them, but we also know people have their own tastes, so feel free to offer your own commentary on these cheeses below. And don’t be afraid to try them out: since this is Aldi we’re talking about, you won’t pay much. 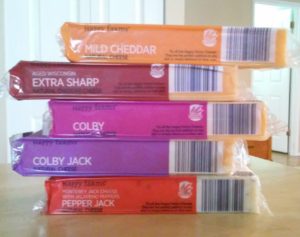 This block is one of the harder ones to cut, but it’s worth it. It is a delightful cheese with a robust, deep flavor. The first bite will probably make you pucker your lips a bit — that’s the sharp part. It goes away after a few bites though, and I think it actually gets better with each bite.

It doesn’t make me draw my lips in like the extra sharp does, but it also doesn’t quite carry the same depth of flavor for me as the extra sharp. It’s a really good cheese, though, and is a particular treat for me when paired with butter crackers. It cuts fairly easily.

Colby is a little sharper than mild cheddar, but not quite as sharp as extra sharp cheddar. Sort of an in-between cheese to me. It’s fun to nibble on, but it is probably my least favorite of the Aldi cheese blocks.

It’s got a lighter flavor than Colby and I prefer it over its similarly named cousin. Goes good with crackers and sausages as a change-up to the traditional mild cheddar route.

Pepper Jack is cheese with a little kick. If you’re strictly a mild food person, stay away. If you like something more in the medium territory (I wouldn’t call it hot), you’ll love this stuff. It cuts very easily and can be put to use in any number of recipes. It’s also perfectly good just by itself.

A staple on any pizza, mozzarella is just as fantastic cut into small cubes. It cuts easily, has a simple but delightful flavor, and can be put to all kinds of uses, including all by itself.

They’re all good in different ways, although we don’t like standard Colby quite as much as the rest. You can put them to use in recipes or simply cut them into cubes and serve them on a tray. Or just eat them yourself. Recommended all-around.