During certain times of the year, especially when parties might be more common, Aldi ramps up their Special Buy offerings related to appetizers and other party snacks. One such offering is spinach and artichoke dip … which the grocer likes enough that they offer two different kinds: one refrigerated, one frozen.

Let’s take a look at each of them. 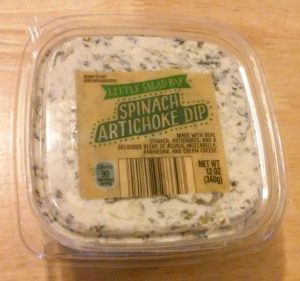 This is the refrigerated stuff, carrying the Little Salad Bar brand that we see on the likes of garden salsas, potato salad, coleslaw, and other cold sides. The one we bought came in a 12-ounce plastic container with a slightly finicky plastic lid, although it is compact. It came out to about 25 cents an ounce.

I didn’t see any preparation instructions, so I simply scooped some into a microwave-safe dish and heated it for about 15 seconds, stirred it, and heated for another 15 seconds. Your time frame may vary, depending on your microwave and how much you’re heating. I found that it comes out a bit thick when you first scoop it, but it thins to a more recognizable consistency after heating.

Overall, I think it’s pretty good. It seems maybe a bit saltier than the kind I’ve gotten in restaurants, but it’s got a pretty good taste and has nice chunks of artichoke in it. It scoops nicely with nacho chips. 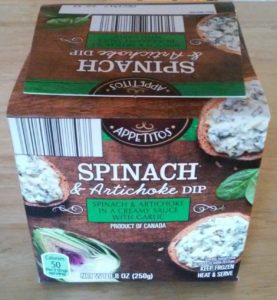 The Appetitos Spinach & Artichoke Dip comes frozen. It comes in 8.8 ounces, and at about 28 cents an ounce is just slightly more expensive than the Little Salad Bar dip.

Because it’s frozen, the preparation is slightly more involved. In years past, we’ve purchased it in a tray form, with a clear plastic peel-away lid; this year, the one we bought came as a sort of frozen brick in a vacuum-sealed plastic wrap, like Bremer Bistro French Onion Soup. The instructions call for heating the dip in a microwave dish for three minutes, stirring, and then heating for one more minute, or until the internal temperature is 165 degrees.

Overall, I think this dip is also pretty good. It tastes less salty than the Little Salad Bar, but also has a less chunky texture, so there is a bit of tradeoff.

Also, Appetitos also makes a Buffalo Style Chicken Dip in a similar format. We’ve tried it in the past; it’s not really our thing, but if you like that kind of dip it might be worth a look.

Given that the prices are similar and our opinion comes out mostly to a push, I figure you probably can’t go wrong with either. Obviously the Appetitos, being frozen, will keep longer before first use than the Little Salad Bar, but if you’re going to be using it sooner rather than later that isn’t as much of a consideration. The Appetitos also takes a little longer to prepare, although not by much.

In other words, both have their pros and cons, but both are generally recommended.