There isn’t much mystery to this one, though. It’s a Special Buy. And frozen. And not for vegetarians. 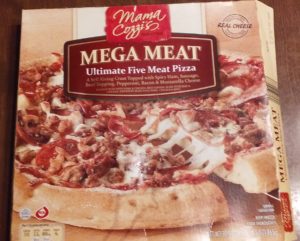 Mama Cozzi’s Mega Meat Ultimate Five Meat Pizza is, as advertised, a five meat pizza: spicy ham, sausage, beef topping, pepperoni, and bacon, alongside mozzarella. It’s a pretty loaded pizza, and not just in toppings. One slice contains 310 calories and 37% of your daily allowance for sodium. Naturally, no one eating this pizza probably expects it to be a part of a balanced diet.

Cooking it is a standard operation. The instructions call for preheating the oven to 400 degrees, then cooking the pizza for 22-25 minutes, or until the cheese is golden brown. (We recommend using a pizza crisper, which keeps the crust crispy while also keeping the oven clean.) Then you simply remove, let sit for a few minutes, cut up, and serve.

As for taste … I’m not sure it’s up to par with a restaurant or take-and-bake pizza, but as far as frozen pizzas go, it’s solid all-around, especially by frozen standards. The crust is decent, the cheese is good, and the meat toppings are excellent. It’s a true carnivore meal. And let’s be honest, because it’s Aldi, the price is awesome: just $4 at the time of this post.

Mama Cozzi’s Mega Meat Ultimate Five Meat Pizza is a really nice Special Buy that comes loaded with a variety of meats, a good helping of cheese, and an overall great taste … all for a price you come to expect from Aldi. It’s a nice option for a meat-eating group, although it won’t win any awards for health.