Aldi is a German-owned company, so it’s only appropriate that its stores in the U.S. periodically sell food imported from Germany or foods that are inspired by Germany. After following several conversation threads on our Aldi Reviewer Discussion Group on Facebook, I realized a lot of Americans are quite fond of Aldi’s Deutsche Kuche line of Special Buy German foods that show up a few times each year, sometimes during an event known as “German Week.”

Deutsche Kuche translates to “German cuisine,” and you’ll recognize Aldi’s Deutsche Kuche product line because the packages are all marked with a distinct photo of Neuschwanstein Castle in Bavaria, Germany. Some people are such big fans of Aldi’s German food that they buy large quantities of cornichons, peanut puffs, dopple keks, and more to stock up and last them until the next time the items appear on store shelves.

Let’s take a look at a few of Aldi’s German food offerings. 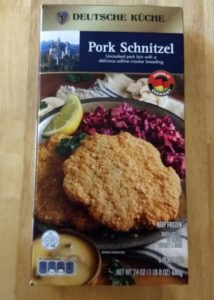 This box comes with six frozen uncooked pork loins with “a delicious saltine cracker breading.” The package says these are “inspired by Germany,” but I don’t see anything indicating if they actually are imported from Germany or any other European country. When I served these to my kids, I sang “My Favorite Things” from The Sound of Music. You know … “Cream-colored ponies and crisp apple strudels, doorbells and sleigh bells and schnitzel with noodles.” I did actually serve these with noodles, too. We had Aldi’s Deutsche Kuche Cheese Egg Spaetzle (scroll down to read about it).

My family had never eaten pork schnitzel before, but we enjoyed this meal. My husband and 6-year-old are carnivores who especially like the schnitzel, so it was a win in our house.

The pork loins can be pan fried or deep fried. I did not have my deep fryer set up, so I pan fried ours. I heated one tablespoon of vegetable oil per pork loin over medium-high heat and cooked the schnitzels for 5 to 6 minutes per side until they were golden brown and reached a temperature of 160 degrees. To deep fry, heat oil to 350 degrees and cook schnitzel for 3 to 4 minutes. Drain on a paper towel before serving. Microwave preparation is not recommended. The box also included a recipe for Pork Jager Schnitzel, which has mushrooms, butter, white wine, brown gravy, and lemons, but I didn’t make it. 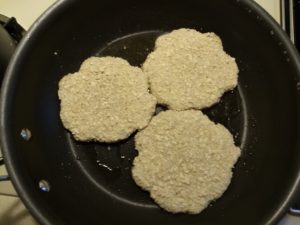 Schnitzel frying in the pan.

These are large sandwich cookies. They’re imported from Germany, and I think the actual English translation would be “twin cakes.” At the time of purchase, these were $1.99 for a 17.6-oz. package.

The package states these cookies have a 46% cocoa cream filling. The cookie itself — without the filling — is mild-tasting, with little flavor, but the chocolate filling makes up for that. The cookies contain Utz Certified cocoa, which seeks to promote “sustainable farming and better opportunities for farmers, their families, and our planet.” 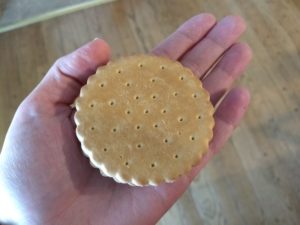 My family all enjoyed the Doppel Keks, but I can’t emphasize enough how big these cookies are. One serving equals one cookie, and it nets you 140 calories and 10 grams of sugar. So snack carefully, and try to limit yourself to just one. 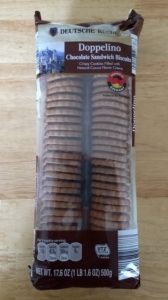 These are cute little sandwich cookies (a biscuit is what they call a cookie in Europe/The United Kingdom). While the Doppel Keks I mentioned earlier are huge, these biscuits are cute and tiny, and they’re tasty. The packaging states these are inspired by Germany, but they are actually a product of the Netherlands. At the time I purchased them, they were $2.49 for a 17.6-oz. package.

They consist of crispy light-colored butter or vanilla-esque cookies filled with a cocoa-flavored creme. One serving is four cookies, so you can eat a few of these and not feel too guilty. The package contains a lot of cookies, too, with 16 servings or 64 cookies.

My family really liked these cookies, and one package barely lasted a day in our house. The cookies are airy and crisp and have a certain melt-in-your-mouth quality, and the filling has a good chocolate flavor. 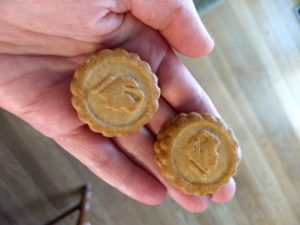 One serving nets you 160 calories, 4.5 grams saturated fat (23% DV), 50 mg sodium (2% DV), and 9 grams of sugar. Similar to the Doppel Keks I talked about earlier, these sandwich biscuits also contain Utz Certified cocoa, which seeks to promote “sustainable farming and better opportunities for farmers, their families, and our planet.” 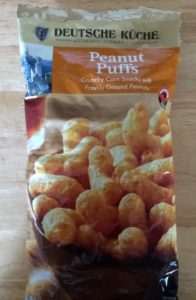 These are “crunchy corn snacks with freshly ground peanuts.” They’re imported from Germany, and they are quite different from any snacks on traditional American grocers’ shelves. At the time I purchased them, they were $1.49 for a 7.05-oz. bag.

The ingredients are: corn grits, peanuts, sunflower oil, and salt. They remind me of a Cheeto in terms of shape and texture, but they’re peanut-flavored rather than cheese-flavored. 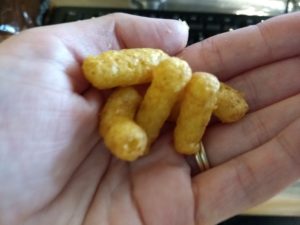 I thought these were okay, but the rest of my family didn’t really care for them. Not even my peanut-loving husband. 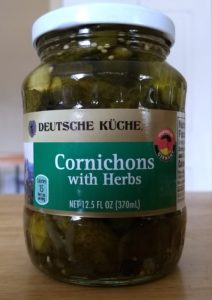 These are fancy pickles. They make a great snack or appetizer. Cornichons have a wide-ranging popularity but apparently originated as a French thing. The Aldi jar states these cornichons are inspired by Germany but are a product of India. At the time of purchase, these were $1.99 for a 12.5-oz. jar.

These were gone from my house in about a day, and my 10-year-old ate about half of the jar herself. They taste like the homemade pickles one of my friends makes, with real bits of dill weed and peppercorns packaged in the jar with the cucumbers. Sometimes I had to pick clumps of dill weed off before eating these. 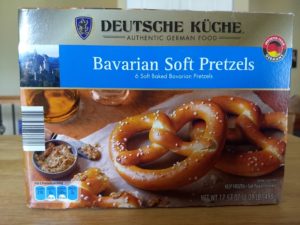 These are sold frozen, with six large soft pretzels per box. They are imported from Germany. At the time of purchase, they cost $3.29 for a 17.57-oz. box.

The box shows a photo of the pretzels being served with a whole grain mustard, but my family ate these pretzels with Aldi’s Clancy’s Cheese Dip. The pretzels are reminiscent of what you can buy at mall food kiosks, but these are a fraction of the cost of mall fare.

The box has instructions for baking the pretzels. Preheat the oven to 350 degrees and cover a baking sheet with parchment paper. Place the frozen pretzels on the sheet. Spray the pretzels with water, then sprinkle the included salt packet over the pretzels. Bake for about 5 minutes.

One serving (one pretzel) contains 210 calories, 0 grams saturated fat, 1,500 mg sodium (63% DV), and 3 grams of sugar. Holy sodium, Batman. Fortunately, you can reduce the sodium content by using less — or none — of the salt packet. 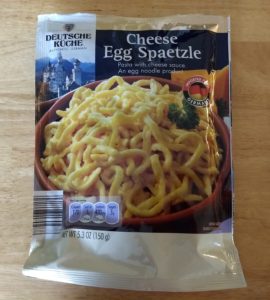 This is sold in a shelf-stable little package and contains “pasta with cheese sauce.” The package also states it is “an egg noodle product.” This is imported from Germany, and at the time of purchase, it cost $1.59.

This also came in onion and mushroom varieties (see below), but my family — particularly my kids — likes the cheese version best. My family scarfed this pasta when I served it as a side dish during dinner one evening. The sauce is delicious, and it includes little bits of what appear to be fried onions and other seasonings. I will definitely be purchasing several of these packages of pasta the next time Aldi sells them.

The package includes directions for stove top preparation only; no microwave directions. To prepare, pour 2 and 1/3 cups of cold water into a medium saucepan. Add the whole bag contents, stir, and bring to a boil. Simmer without covering the pan for approximately 12 minutes until desired consistency is reached, stirring occasionally. 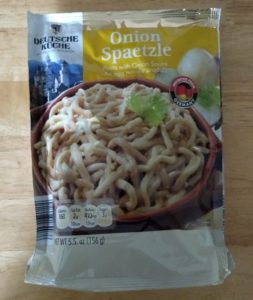 I eventually decided to try the onion spaetzle. This is pretty similar to the cheese egg spaetzle mentioned above, except the key flavor is onion instead of cheese. The onions are evident immediately upon opening the package; it smells like French onion soup.

It’s prepared on the stove top the same way as the cheese spaetzle. 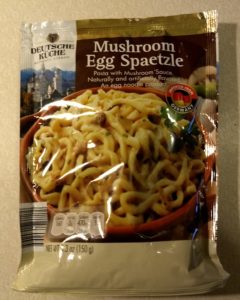 This is similar to the cheese spaetzle and the onion spaetzle mentioned above. The mushroom spaetzle was my least favorite of all the spaetzle varieties. Upon opening the package, it has a very strong mushroom smell. That’s good if you like mushrooms, I suppose, and I do like mushrooms when they are cooked and well seasoned. This spaetzle, though, just smells like mushrooms and little else.

This is prepared on the stove top the same way as the cheese spaetzle and the onion spaetzle.

Aldi periodically sells a variety of German foods, German-inspired foods, and European-inspired foods … all under a German-themed advertising banner. Most products are imported from Germany, but some products actually come from places like India and the Netherlands. My family enjoyed just about all of the products we sampled. If you enjoy German food or European food, it’s well worth your money to try a few of Aldi’s quality products. Just buy them while you can because they’re never in stores for long.