Aldi is a grocery store that originated in Germany, and its European roots show in some of the everyday favorites it sells, such as its chocolate bars. Where the grocer really shines is a couple of times each year when they sell a variety of German foods, including cream cakes, peanut puffs, doppel keks, soft pretzels, and noodles, many of which we opine about over here.

Of course, if you’re looking for a full meal and not a snack or side dish, one of the best German standbys is schnitzel. Aldi has sold pork schnitzel in the past, but they also sometimes sell chicken schnitzel. In short, it is amazing, and you should absolutely buy it if you see it at Aldi. Just remember to pick up some oil for pan-frying it in, and you’ll be all set. 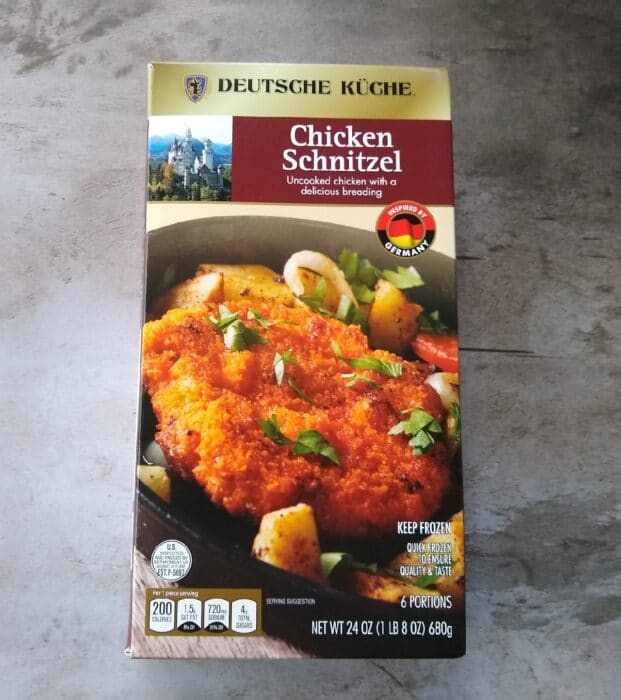 Deutsche Küche Chicken Schnitzel cost $7.99 for a 24-ounce box at the time of publication. It’s sold frozen and is uncooked, so you’ll want to be sure to do a thorough job cooking it (more on that shortly).

This is an Aldi Find (Special Buy), which means it’s only in stores for a short time. Aldi does not offer online ordering for its specials, and once this sells out at your local store, you’ll have to wait a few months for Aldi to bring it back.

This is not actually a product of Germany, and the seal on the front of the package states it is “Inspired by Germany.” I’ve seen this before with a few of the products in Aldi’s Deutsche Küche line that appear to be from Germany because of their house label, but are actually from elsewhere. Aldi’s Deutsche Küche Cornichons with Herbs are another example of this; they are a product of India.

The ingredients list for this chicken schnitzel is fairly long but straightforward, composed for the most part of easily recognizable ingredients. Primary ingredients are chicken, salt, lemon juice concentrate, vinegar, and breading made with bleached wheat flour, Parmesan and Romano cheese, and other ingredients.

If you’re looking out for allergens, this contains wheat, milk, and egg. 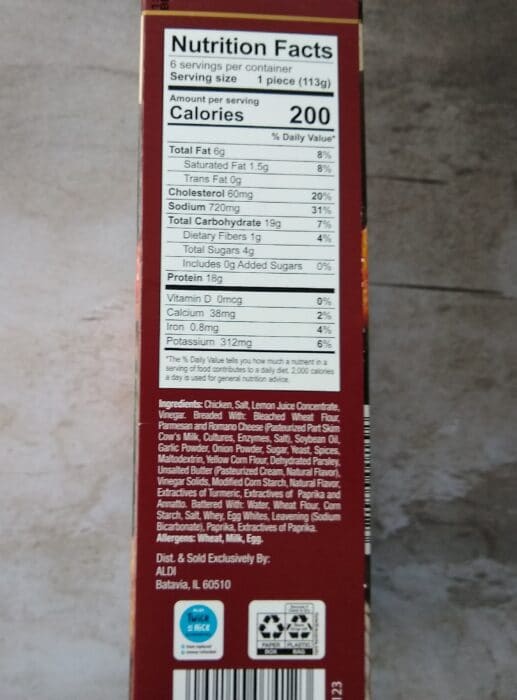 Cooking the schnitzel can sound like a bit of a messy or intimidating job, but it’s not too bad. The box has instructions for either pan frying it or deep frying it. However you fry it, it should be cooked from frozen to an internal temperature of 170 degrees Fahrenheit. 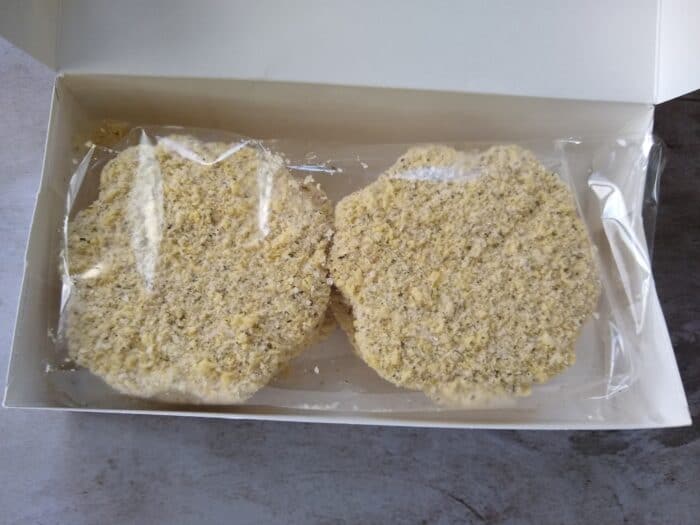 To pan fry, heat 1/8 of an inch of oil in a frying pan over medium-high heat. Place the schnitzel in the skillet and cook 3-4 minutes per side, until golden brown. Drain on a plate covered with paper towels before serving.

To deep fry, heat oil to 350 degrees. Place the schnitzel in the fryer and cook for 3-4 minutes until golden brown. Drain on a paper towel before serving. 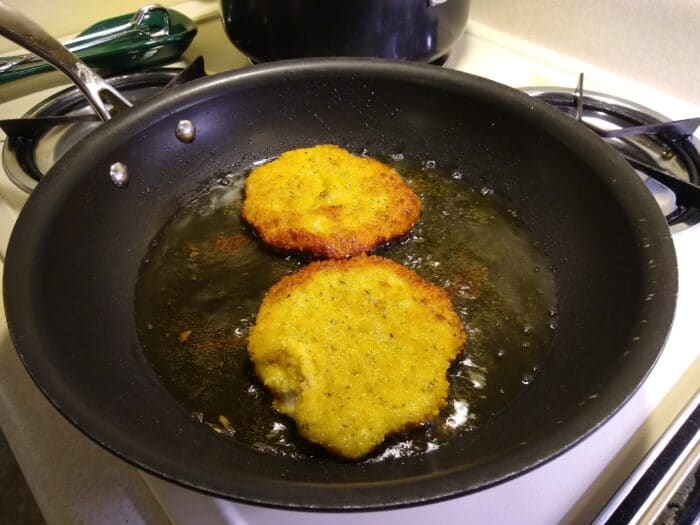 In the frying pan.

I opted to pan fry our schnitzel, and it was easy. I served the schnitzel alongside some boiled and buttered egg spaetzle and some sautéed and buttered onions, and everyone in my family enjoyed the meal. As a result, I’ll be picking up some schnitzel whenever I see it at Aldi in the future.

If you want a bit more than simple schnitzel with noodles, the box also has a recipe:

Deutsche Küche Chicken Schnitzel is sold under Aldi’s German food house brand, although it’s not an actual product of Germany but rather is “inspired by Germany.” It cooks easily via pan frying or deep frying, pairs well with spaetzle, and is delicious. Recommended.