Instant Pots are all the rage. Just about every cooking website, mom blog, and foodie site has, at some point, chronicled their experiences with the versatile little machine. An Instant Pot is a high-tech take on a centuries-old device, a pressure cooker, which uses pressure and steam to considerably speed up the cooking process. Several design choices set the Instant Pot apart, but one of the most important is the fact that the Instant Pot’s programmable cooking modes take out much of the guesswork.

Aldi is not one to shy away from cloning popular appliances, and the grocer has done it here, too. 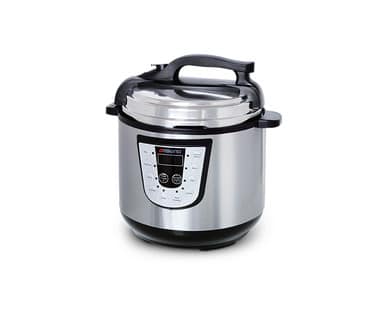 The Ambiano 6-in-1 Programmable Pressure Cooker, an Aldi Special Buy (ALDI Find), retails for $39.99. At press time, this is about half the cost of a comparably equipped Instant Pot, so on paper this is a pretty solid deal. The Ambiano’s materials don’t indicate who the manufacturer is, but the device does come with a 3-year warranty backed by a company called “Customer Care USA,” which has been known to appear on Aldi-related products in the past.

The pressure cooker’s features include:

In addition, the Ambiano Pressure Cooker comes with:

It’s worth noting here that the Ambiano uses a nonstick interior for its inner pot. This is different from the stainless steel inner pot of an Instant Pot. Which one you prefer will probably depend on individual taste. Users will want to make sure they use a nonscratch utensil such as a wooden spoon. 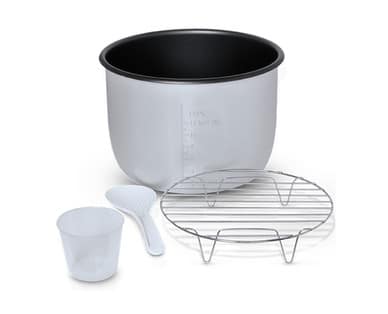 The Ambiano, like most electronic pressure cookers, is a complex device, and users would be well-advised to spend some time with the manual before first use. There are a lot of important steps and safety considerations, especially for those who haven’t used a device like this before, and while the learning curve does get easier over time, it’s important to make sure everything is assembled, cleaned, set up, and used correctly.

Once properly set up, it’s a matter of setting the appropriate cooking setting, setting the cook time, and starting the process. The Ambiano, like many Instant Pots, has six functions and ten pre-programmed cooking modes, which are the meat and potatoes, figuratively speaking, of the device. The timer allows for delayed start, meaning that users can set the Ambiano, go out, and have it start cooking while they’re gone. 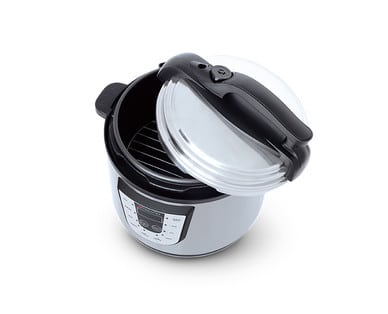 While it’s hard to argue with the success — and generally positive reviews — of the name brand Instant Pot, shoppers looking to try out the Instant Pot cooking approach on a budget might want to give this Aldi appliance a close look, especially as the Ambiano Pressure Cooker has many of the same programming functions for a lot less money. The 3-year warranty is a nice extra.