Over the last few years, nothing has captured the attention of the home cooking world quite like Instant Pots. If a website covers food in any way, chances are that the site has not only has talked about them, but might even be collecting affiliate commissions for talking about them. Instant Pots are, to put it simply, modernized versions of an old-school device, the pressure cooker. Pressure cookers use pressure and steam to accelerate the cooking process, often producing excellent results. Where older pressure cookers require a bit of guesswork, modern Instant Pots reduce it to a programming science.

Aldi has its own version of one. 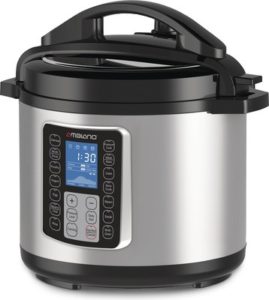 The Ambiano 9-in-1 Programmable Pressure Cooker is an ALDI Find (Special Buy), retails for $59.99, which is significantly less than Instant Pots of its class. This is actually the second Instant Pot clone Aldi has sold, the first being the $39.99 Ambiano 6-in-1 Programmable Pressure Cooker. In addition to the additional cost and number of modes, the 9-in-1 is also larger: it’s 8 quarts, in contrast to the 6-in-1’s 6-quart capacity.

The 9-in-1 model comes with the following features:

The warranty is serviced by Customer Care USA, which services the other Ambiano pressure cooker, as well as a a number of other Aldi appliances.

In addition, the pressure comes with the following in the box:

Of particular note is the stainless steel cooking pot, which is different from the nonstick pot used by the Ambiano 6-in-1 Programmable Pressure Cooker. While different people may have different opinions as to which kind of pot is better, stainless steel is more consistent with an Instant Pot experience.

The Ambiano pressure cooker is — like most electronic pressure cookers — a complex device, so you’ll want to spend some time getting the ins and outs from the manual before using it for the first time. Some of those steps relate to safety, which makes them especially important. These devices do have a learning curve, so spending some time reading things carefully the first time helps to make the experience better overall.

Once properly set up, it’s pretty much just about setting the cooking setting, setting a cook time, and getting started. With all the pre-programmed modes, there are a ton of different ways to use this device, and the delayed start even allows for setting the Ambiano to begin its work while you’re gone. On the other hand, it can also keep things warm when cooking is done.

We’re intrigued by this device, especially given how cheap it is compared to an Instant Pot of the same feature set. Granted, Instant Pots tend to have pretty positive reviews, but Aldi appliances have come a long way in recent years, so we’re optimistic about this one. We’d love to hear individual user experiences in the comments.