Everyone knows the Instant Pot is the thing right now. In fact, programmable pressure cookers have become a full industry, thanks to their versatility and their ability to cook things faster than, say, a Crock Pot. And in an age when people coming home from a long day of work might not have or want to spend a lot of time cooking, this is a big deal.

So here we are, in late November and — sure enough — Aldi is selling another 8-quart programmable pressure cooker. 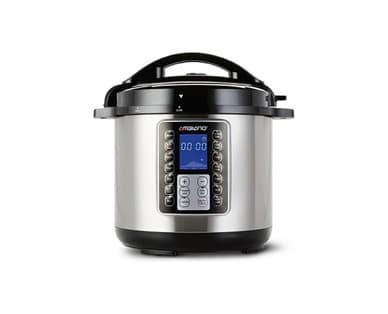 The Ambiano 8-Quart 9-in-1 Multi-Use Programmable Pressure Cooker (product code 57491) is an ALDI Find, meaning it’s only in stores for a short time. It retails for $69.99. That makes it $10 more than the 2018 model of this type, although it’s still less than a comparably equipped Instant Pot.

The pressure cooker comes with:

Here are the features, according to Aldi:

We took particular note of the fact that it’s a stainless steel cooking pot. Some of the previous Aldi pressure cookers have used nonstick pots, a fact that has been sharply polarizing to people who have commented on our posts. The presence of a stainless steel pot would be more in keeping with what an Instant Pot uses, and apparently it is more of what shoppers who comment on our posts seem to want.

This cooker looks a lot like the 2018 8-quart model, and in fact may be similar, if not identical. Last year’s model had a 3-year warranty, serviced through Customer Care USA, and we wouldn’t be surprised if that was the case this year, too.

Because each Aldi pressure cooker is a little different than ones that came before it, we’re not sure exactly how this one performs, even if we have a strong suspicion it’s like the 2018 model. As always, we’re curious to hear what users think.

Have experience with this pressure cooker? Let us know in the comments.