The Ambiano Programmable Pressure Cooker is Returning to Aldi

In 2009, three friends who had met while working at a company in Canada had an idea. Rather than have several different cooking appliances, each of them taking up space in the kitchen, why not just have one? Working together, the three designed a solution. Their device could act as a steamer, slow cooker, yogurt maker, rice maker, searing pan, and even a pressure cooker.

In 2010, the Instant Pot was born. It’s not an exaggeration to say that, within a few years, the all-in-one device had taken the world by storm. It became the must-have appliance, especially around the holidays. Not only could it do the work of multiple appliances, but it could cook fast — just what busy families needed. Instant Pots sold like crazy, with entire sites devoted just to recipes for the handy device.

Aldi did not sell a pressure cooker in 2021. This was either by design or because of product delays; since Aldi did sell pressure cooker accessories, my guess is the latter. Regardless, in early 2022, the 6-quart version of the product made its return to the weekly ad. 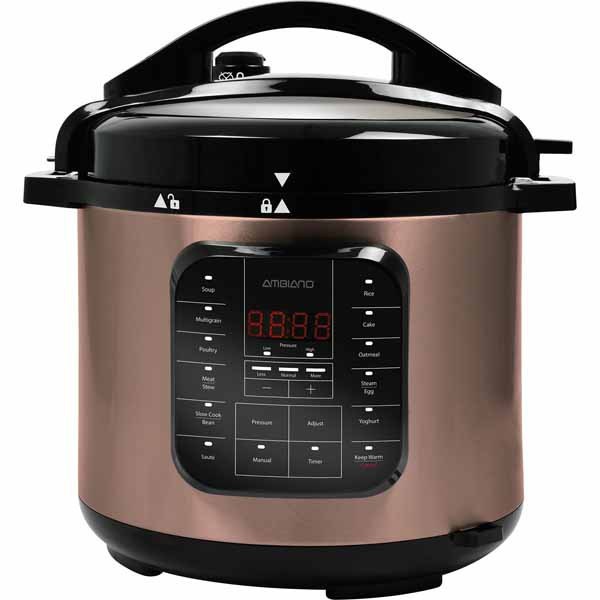 The Ambiano Pressure Cooker (Product Code: 807994) is an Aldi Find, which means its only in stores for a limited time. Once it’s gone, it’s gone, and Aldi won’t be bringing it back for a while.

At the time of this post, the Ambiano cooker is $49.99. This is same price it cost in 2020, and is significantly less than most other programmable pressure cookers on the market.

According to Aldi, the cooker’s features include:

The cooker comes with a 3-year warranty serviced by Monolith Support, a German after-sales service provider.

We haven’t yet tested this model, so we can’t speak to how well it functions. We’ve created this open thread for users to share their experiences.

Do you have experience with the Ambiano Pressure Cooker? Let us know in the comments.