Special thanks to Jon, who likes coffee more than we do, for help with this review.

One of the great sensations of the coffee-drinking world the last few years has been the Keurig, a device that turns little plastic containers (K-Cups, or what Keurig more formally calls “K-Cup Pods”) into single-serve beverages. Keurigs are most famous for making coffee, but the devices can also make other drinks, including tea and hot chocolate. What they lack in the pure joy of a French press, they make up for with speed and efficiency, and they are increasingly common in offices and break rooms as the go-to device for an easy cup of joe.

At the time of this post, Keurig brand machines retail from $65 for the so-so Keurig K-Mini, to the $200+ Keurig Office Pro. Combine that with the cost of the K-Cups themselves, and Keurig life can start to add up, convenience or not.

Aldi is in the business of making things cheaper, so it’s not a surprise that the grocer has entered the Keurig fray by selling its own K-Cups for coffee and, on occasion, hot cocoa. Still, we were more than a little surprised to see Aldi trot out an actual Keurig-style machine. Could Aldi really duplicate the Keurig experience at a fraction of the cost? 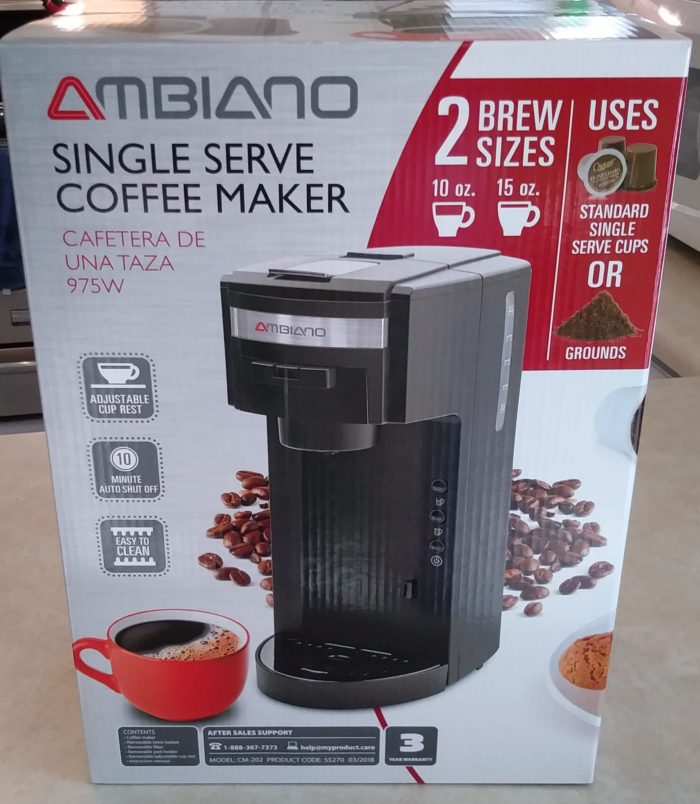 The Ambiano Single Serve Coffee Maker, an Aldi Special Buy (ALDI Find), retailed at the time of this post for $19.99. The price alone deserves notice, as it is less than a third of the cost of the cheapest Keurig we’ve seen short of some insane Black Friday sale, if that. 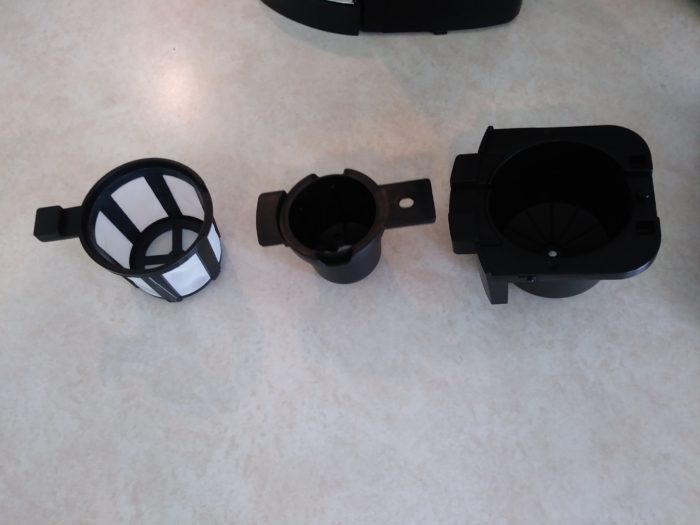 Setup isn’t hard, although it does take a few minutes. The instructions advise gently cleaning the unit first (with warnings not to submerge the unit in water), then filling up the reservoir and running the unit a few times without any coffee to clear out any contaminants. After doing that, the unit should be ready to go.

The unit takes a couple of minutes to heat the water up first, with the power button flashing until the water reaches the necessary temperature. At that point, you can insert a K-Cup into the pod holder (which has a small probe to poke a hole in the bottom of the K-Cup) or put coffee grounds into the filter, then press the desired amount button.

How It Compares To a Keurig

The Ambiano is a lot cheaper than even a cheap Keurig, so you sort of expect that it’s not going to perform quite like a Keurig. Still, it’s good to know exactly what the limitations are. And there are some.

One is your options for drink sizes: 10 ounces or 15 ounces. A Keurig, by contrast, usually offers smaller amounts, so if you’re looking for a small mug of coffee, you’ll have to manually stop the Ambiano, which is a hassle.

Another consideration is speed. The 10-ounce cup takes about 2 minutes to make, while the 15-ounce cup takes about 3 minutes. From our conversations with Keurig owners, this is longer than the 1-2 minutes the Keurig takes, not including the water-heating time on the front end with the Ambiano. The Aldi machine is still faster than a coffee pot, but it’s not as fast as your typical Keurig.

A third limitation is the reservoir. While it has some positives (more on this in a second), it is not detachable, so you have to pour water into the whole unit rather than pulling it out and putting it under the sink. 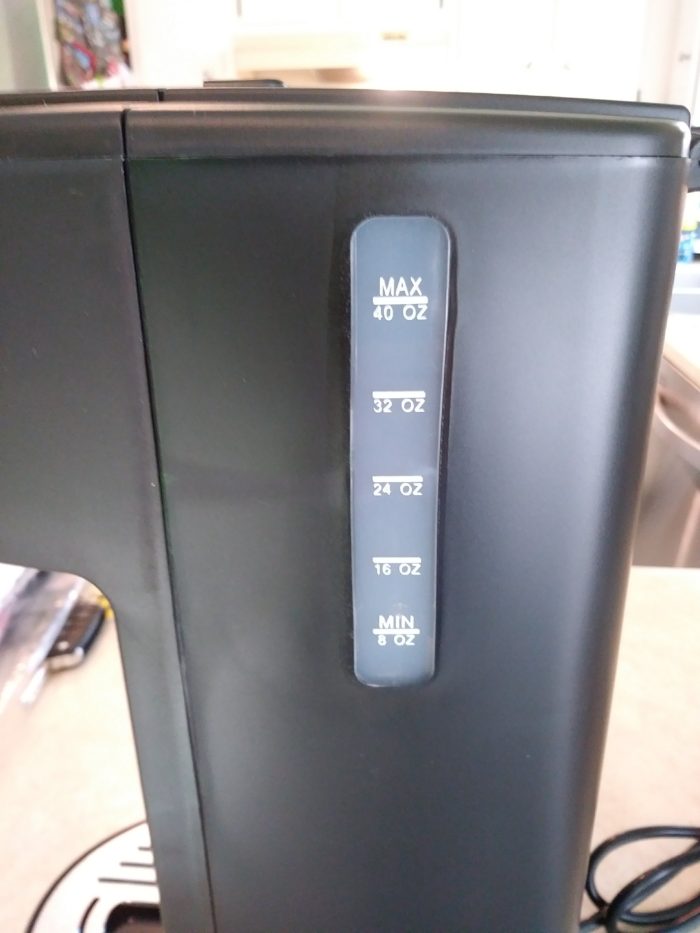 A fourth consideration — and this is minor — is that the base was a bit finicky to get on quite right. Once we did it, it was fine, but you have to be careful that you’ve got it set correctly. 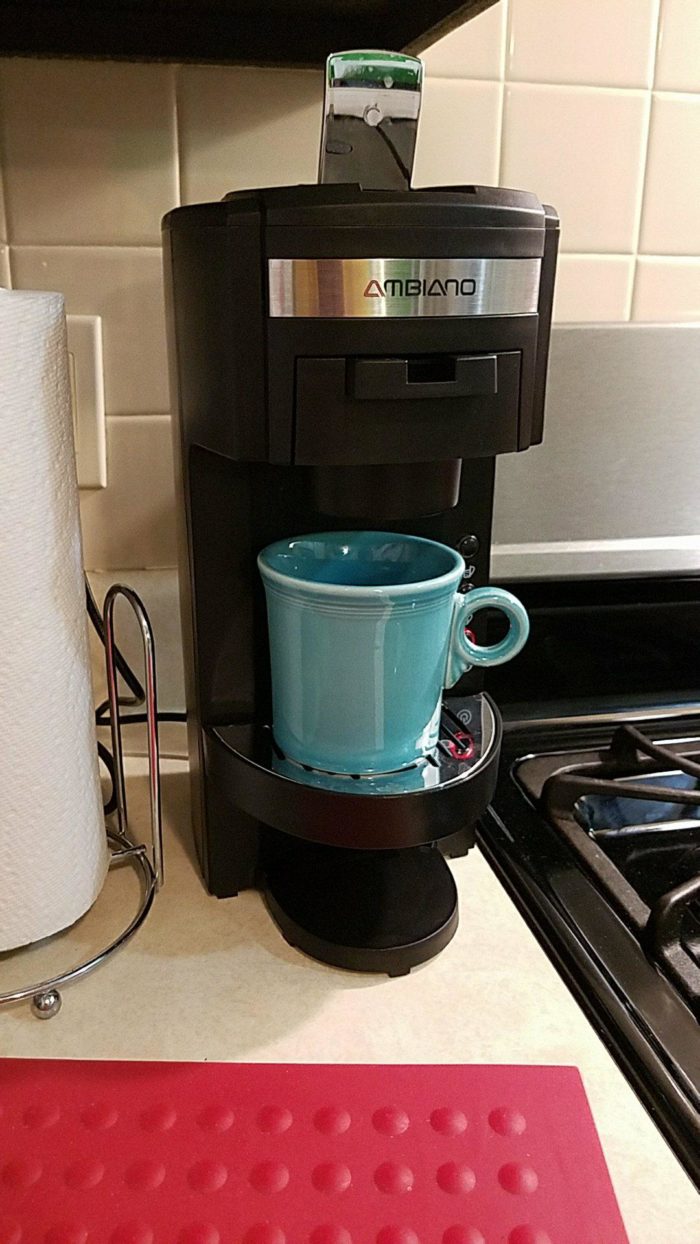 The base in the upper position. (Click to enlarge.)

The base in the lower position. (Click to enlarge.)

All that said, the Aldi machine does compare favorably to the Keurig in a couple of ways. For one thing, it runs about as quiet as Keurigs we’ve seen, which is nice. Another is the way K-Cups go in: it’s not exactly the same as a Keurig, but it works well enough. And the fact that it runs on tap water is also a plus, with instructions in the manual on how to decalcify the device if you need to. Yet another positive is how it’s large enough for most travel mugs.

Most importantly, the Ambiano produces a good cup of coffee. It’s plenty hot — a bit hotter than our tester’s drip maker — and the coffee is as strong as you would expect it to be. You can make a decent cup using any K-Cup, but but you can also make an very good cup using the filter and your own coffee grounds.

One more note: it doesn’t just make coffee. You can make, say, tea using a tea K-Cup, but you can also serve up a nice single-serve cup of tea by pouring two tea bags — you’ll need two because of the way it steeps — into the filter.

Update (February 2019): After a year of moderate use (twice a week), our 2018 coffee maker continues to work as well as it did when we first tested it.

It’s not a Keurig, but the Ambiano Single Serve Coffee Maker is a decent imitation of one, especially for the $20 price tag. It’s not as fast as a Keurig and it does lack some of the bells and whistles, but if you’re looking for a device that can turn a K-Cup into a hot cup in a reasonably fast period of time, this is an interesting option. The three-year warranty is a nice bonus.