In the 1990s, an unemployed tech worker named John Sylvan set out to fix a problem. In his time in the working world, Sylvan noticed that a brewed pot of office coffee would languish all day, becoming stale and bitter. He envisioned a solution where single cups of coffee could be brewed on demand.

In 1992, Sylvan and an old college friend co-founded Keurig, named after a Dutch word. In 1998, following years of development, partnerships, and fundraising, the Keurig finally hit offices. By the mid-2000s, a home version landed on store shelves. The company sought to sell the brewers as cheaply as possibly, relying instead on the coffee pods — known as K-cups — to make up the profits. It worked, and the company grew into a giant.

In 2018, Keurig merged with the company behind Dr. Pepper to create one of the largest beverage makers in North America. Today, Keurig and the K-cups used in the machines — which now include coffee, tea, and hot chocolate — are as synonymous with one-cup-at-a-time beverages as Kleenex is with tissue.

Despite the wide brand recognition, Keurig has faced competition at least since its move into home markets. Other companies have made their own pods and makers, fighting for a slice of consumer demand.

For the last several years, Aldi has quietly been one of those competitors. The German supermarket has been selling both single-serve coffee makers and pods, offering more budget options in an industry that can get quite pricey. We initially looked at the coffee maker back in 2018, and since there have been some changes since then, we decided to look at the updated model here. 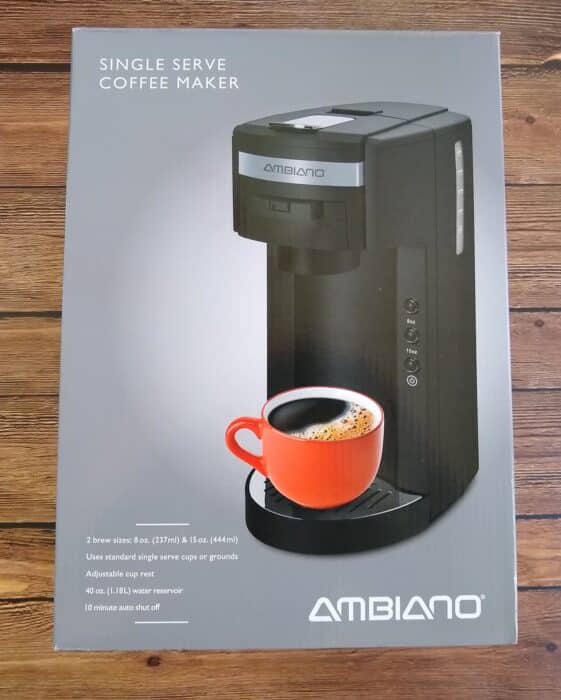 The Ambiano Single Serve Coffee Maker (Product Code: 703345) is an Aldi Find. Each store gets one shipment, and once that shipment is sold out, you won’t be able to find it again until Aldi brings it back. The grocer doesn’t ship products online, so if you can’t find it in your local store, you’re out of luck until it comes back.

What’s in the Box:

Here’s more information about the machine, according to Aldi:

The coffee maker comes out of the box with the following: 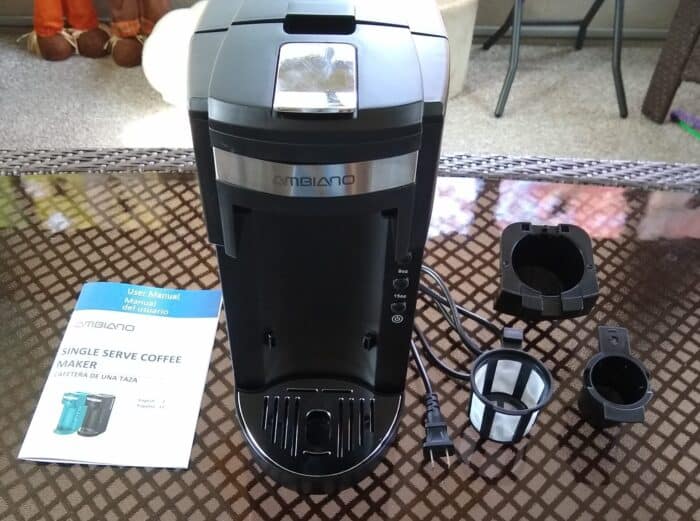 The contents of the box.

Putting the coffee maker together is simple enough. The cup rest and the cup rest plate can sit in one of two positions, depending on your preference and the size of your cup. The pod holder, filter, and brew basket can be removed by raising the silver brew basket release lever at the top of the appliance. 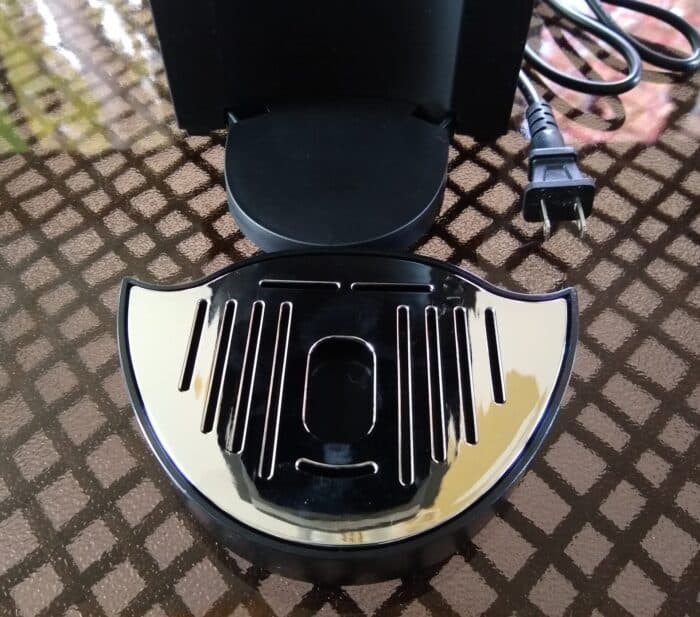 The cup rest plate, off the grooves.

You add water by opening the tank lid at the back of the top and pouring in cold water up to the desired line. 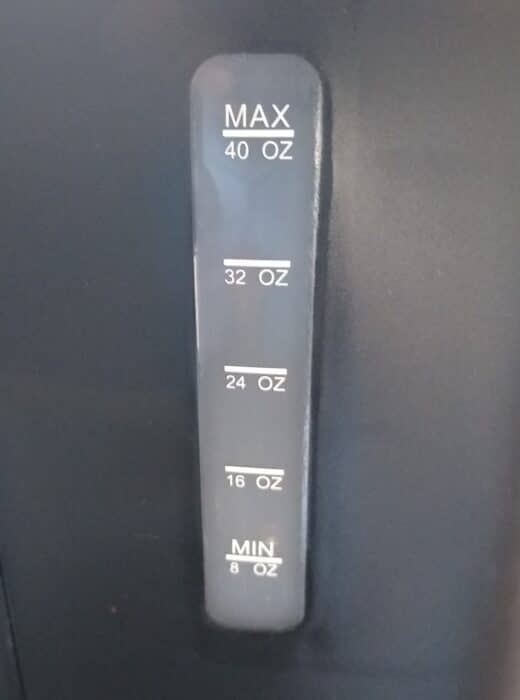 The manual contains some important information, including more detailed setup instructions, various warnings, and what to do prior to first use or after periods of non-use. When you first get the machine, you should, for example, run it 2-3 cycles without the filter or pod holder before initially making cups of drinks. There are also instructions for use and for cleaning and maintenance. If you’re familiar with coffee makers like this one, you’ll understand most of what it takes to operate one.

According to the manual, you should fill the water tank before you plug it in.  In addition, you should clean out the tank from time to time. One negative to this model is that the tank is not removable, so cleaning the tank is a little more of a hassle. (To be fair, not all Keurigs have removable tanks, but it’s still annoying.) What’s more, the instructions are adamant that you shouldn’t submerge the base in water.

The manual also notes that the basket, pod holder, filter, and the non-silver base part are dishwasher-safe, but I generally prefer to wash them by hand.

It’s worth noting that, while this is technically called a coffee maker, it can make some other hot drinks, too. You can use any K-cup pod or pods that are K-cup compatible, including cocoa pods and tea pods. You can also use ground coffee using the included filter.

What parts you’ll use will depend on the situation:

To make a drink with the pod, you first raise the release lever to remove whatever is in place. Then you remove the filter and put the pod in the removable pod holder, making sure the metal needle in the holder punctures the bottom of the pod. Next, you place the pod holder and brew basket in place and close the lever. 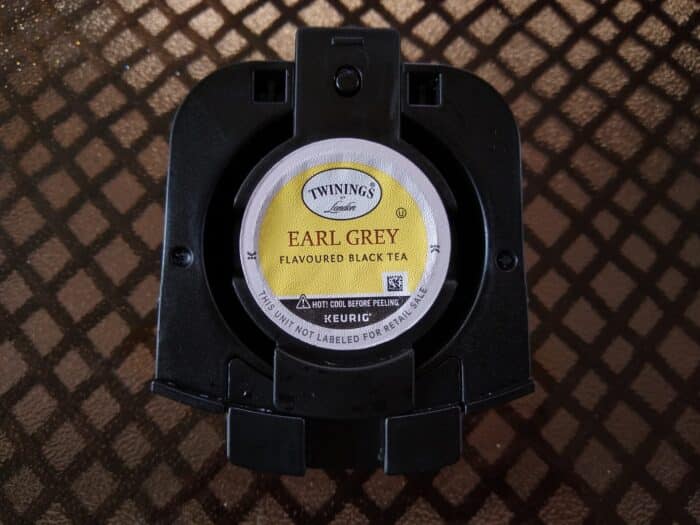 To make a drink with coffee grounds, you raise the release lever to remove whatever is in place. Then you remove the pod holder. Next, fill the reusable filter basket, being careful not to go past the MAX line. Finally, place the filter basket in the brew basket and slide it all back into the maker, closing the lever to lock them in place.

The manual says it takes 30-60 seconds to get ready. That fits our experience.

The maker comes with both 8-ounce and 15-ounce settings. (This is an improvement over the 2018 model, which had 10 and 15 ounce settings, with the first of those being too much for smaller mugs.) They do a good job pouring out the right amount, but you can stop the maker early at any time by pressing the green power button.

In our tests, we tried out pods with vanilla cappuccino, hot cocoa, and tea. The machine starts and stops, occasionally gurgling as it gets to the right amount. 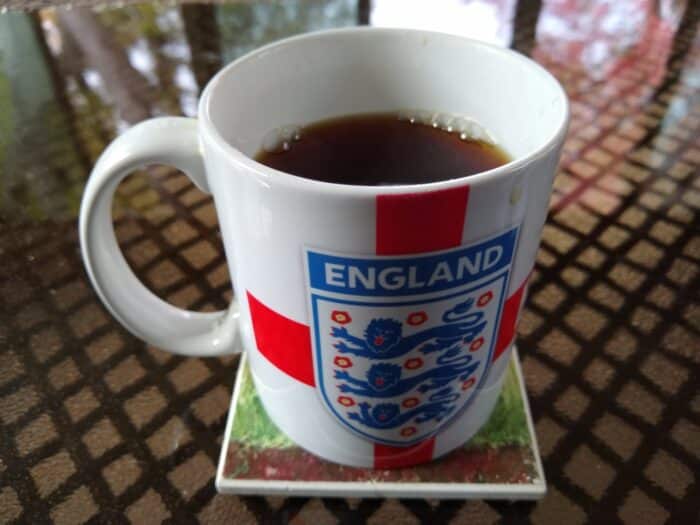 We found it to work fine. The liquid is hot, it brews up what it’s supposed to, and it does the job in a couple of minutes. It performs about like you’d expect, putting out a single serve drink. We tried it with both Keurig pods and Aldi pods and both work the same.

If you’re in the market for a maker that brews K-cup pods or single-serve coffee using grounds, Aldi has a budget model that will do it. The Ambiano Single Serve Coffee maker will brew coffee or other hot beverages in a couple of minutes. It’s easy to set up and easy to use, offering two serving sizes. We wish the tank was removable for easier cleaning, but given the price, that’s perhaps not a surprise. Overall, this can do what a low-end Keurig does for a lot less money. The 3-year warranty adds some peace of mind.