Red Lobster has long been one of my favorite restaurants, but my husband and I haven’t eaten there as often in recent years. That’s mostly because we’ve learned we can replicate a lot of our favorite seafood dishes — we’re partial to shellfish such as shrimp, crab, and lobster — at home for a lot less money using individual ingredients or pre-made entrees purchased at the grocery store. Add a box of store-bought cheddar herb biscuit mix, plus a bag of Caesar salad mix, and we’ve got ourselves a restaurant-quality meal in our own kitchen.

An item I often enjoy getting at Red Lobster is shrimp scampi, an indulgent little dish filled with shrimp in a buttery seasoned sauce. You can make shrimp scampi at home using butter, garlic, and a few other common ingredients, but you can also purchase ready-made shrimp scampi from the grocery store if want something really easy.

During the season of Lent this year, I picked up a box of frozen shrimp scampi from Aldi to try. 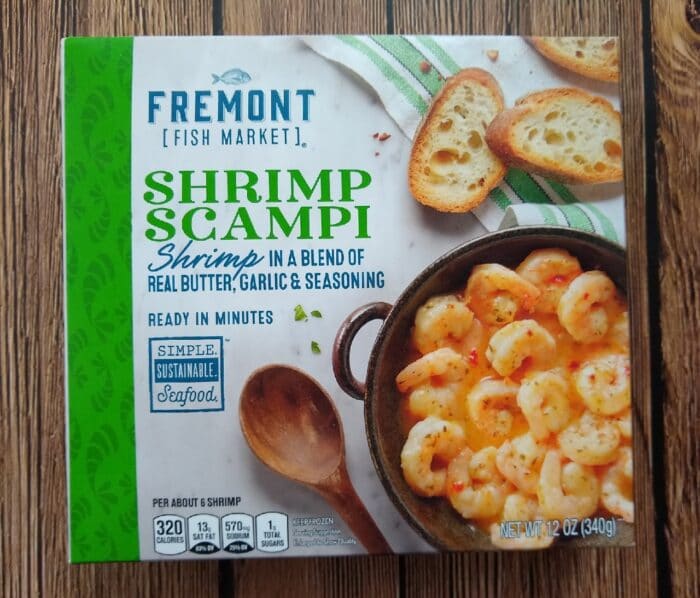 Fremont Fish Market Shrimp Scampi cost $5.89 for a 12-ounce box at the time of publication.

This is an Aldi Find (Special Buy), so it’s only in stores for a short time. Aldi does not offer online ordering for its specials, so after this sells out at your local store, it’s gone.

The package describes this as “shrimp in a blend of real butter, garlic & seasoning.” It’s sold frozen, and it was farm raised and processed in the U.S. The box also states it contains a bioengineered food ingredient. The shrimp are completely peeled with no tails.

The first few ingredients include shrimp, butter, water, and soybean oil. Its seasoning comes from garlic, onion, lemon, parsley, red bell peppers, plus some other processed ingredients. View the full list of ingredients by clicking on the photo below.

If you’re watching out for allergens, this contains crustacean shellfish (shrimp) and milk. 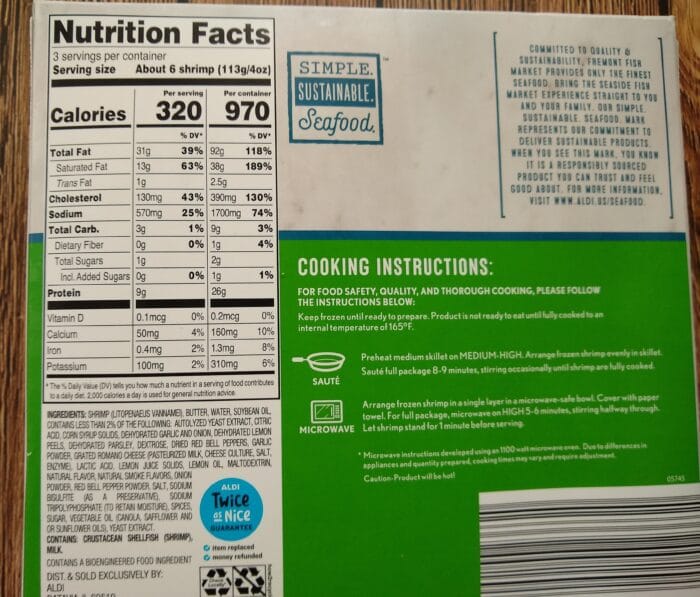 The shrimp scampi can be prepared on the stove top or in the microwave. Either way, this shrimp is sold raw and it should be cooked to an internal temperature of 165 degrees Fahrenheit.

To sauté on the stove top, preheat a medium skillet on medium-high heat. Arrange frozen shrimp evenly in the skillet. Sauté the full package for 8-9 minutes, stirring occasionally until shrimp are fully cooked.

To microwave, arrange frozen shrimp in a single layer in a microwave-safe bowl. Cover with a paper towel. For the full package, microwave on high for 5-6 minutes, stirring halfway through. Let the shrimp stand for 1 minute before serving. 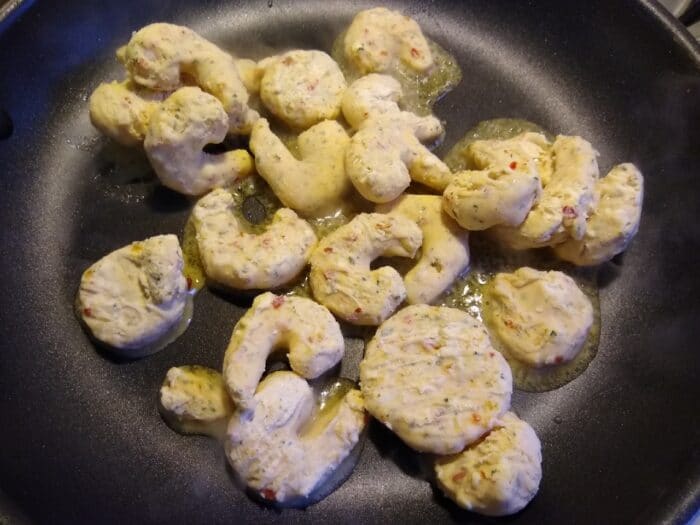 The frozen shrimp just after I poured them onto a hot skillet. Each shrimp is coated in buttery garlic sauce that melts as it cooks.

I cooked our shrimp on the stove top. It was quick and easy to do so, making this great not only for a fancy dinner but also a fast and convenient lunch. The frozen raw shrimp are each covered in a solid layer of buttery garlic sauce that turns to a decent amount of liquid as it cooks. I stirred the shrimp and turned them often to cook them evenly, and they were done after 9 minutes. 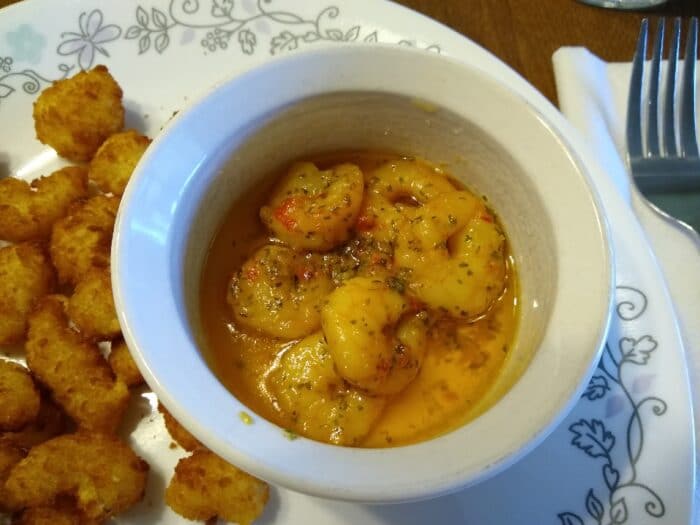 My kids didn’t care for this, instead preferring Aldi’s popcorn shrimp. That just meant more for my husband and me. There were about 28 shrimp in the package — enough for me to initially divide it so each person in our family of four got seven small shrimp. You’ll definitely want to serve this with some other foods to make it a complete meal, or you can stretch it by serving it on top of cooked pasta.

My husband and I liked this, but it is very salty, and some of the seasoning creates a bit of a sludgy texture in the butter sauce, which I didn’t mind, but some people might not like it. It doesn’t taste exactly like the shrimp scampi we remember from Red Lobster, but it’s all right on its own merits.

This definitely isn’t a healthy dish, so it’s not something I’d recommend eating often. It’s loaded with fat, saturated fat, and cholesterol, not to mention a good amount of sodium. I wouldn’t rule out buying it again for special occasions, though.

Fremont Fish Market Shrimp Scampi is a quick, convenient, and budget-friendlier way to enjoy a fancy seafood dish at home. They are pretty salty, and they have high amounts of fat, saturated fat, and cholesterol, but if you’re looking to indulge, these might do the trick.