Bacon enjoys something of a cult status in the United States. As everyone knows, it’s a popular breakfast food, but given all the other places it shows up — on BLTs, atop burgers, even in salads — bacon can just as easily show up for lunch or dinner. That crisp, salty taste just does something.

On the other hand, the nutrition research now indicates that bacon has its health drawbacks (go figure), so bacon is one of those things you’re better off enjoying only as a sometimes food.

Aldi, like most grocers, sells bacon. Interestingly, Aldi sells more kinds of bacon than you would think a small inventory store would, from thick cut to preservative-free to lower sodium. Aldi even sells turkey bacon if pig isn’t your thing.

Square in the middle of the lineup is Appleton Farms Premium Sliced Bacon. It’s an Aldi Regular Buy, meaning it’s available in stores all the time. 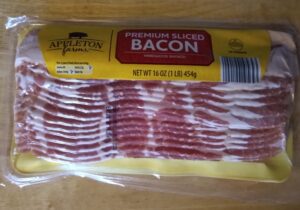 We’ve previously reviewed Appleton Farms Sliced Bacon, and to be honest we’re not exactly sure what the difference is. In our store, the premium bacon was $3.49 for 16 ounces, which is actually less expensive per ounce than the $3.39 our store charges for the 12-ounce “regular” sliced bacon. But the ingredients and nutrition are about the same in both bacon sets, and we didn’t spot any indication that one is somehow cut better or worse than the other. The regular bacon does come in a cardboard sleeve — whether that matters or not is up to you. 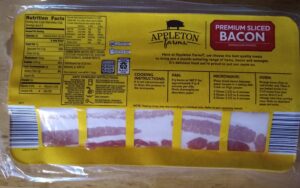 When we first reviewed the Appleton Farms Sliced Bacon, we received a few comments complaining about the high fatty content. We’ve had similar problems with that bacon. With this bacon, though, we felt better about it. It’s marbled and does have a fair amount of fat, but we found it to peel easily. 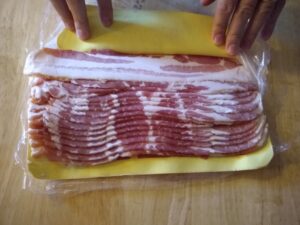 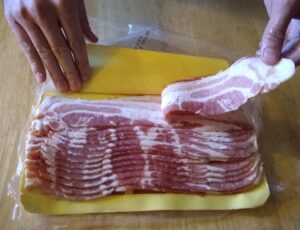 In case you need it, the packaging has instructions for cooking by way of three different methods: pan, microwave, and oven.

To pan fry, cook at 340 degrees for 3-4 minutes per side, then drain thoroughly on absorbent paper towels.

To bake, arrange bacon slices on a cold broiler rack. Then, place in a preheated broiler 3 to 3 1/2 inches from the heat source, and broil for 4-6 minutes total time, turning once. Drain thoroughly on absorbent paper.

For this test, I cooked it two ways: pan fried, and in the Ambiano Air Fryer. (For the air fryer, I cooked it using the air fryer’s bacon preset, which was 360 degrees for 10 minutes. I recommend using tongs to flip the bacon halfway through.) 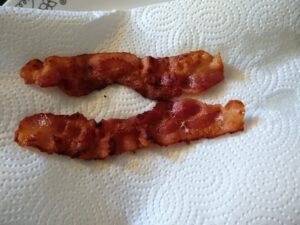 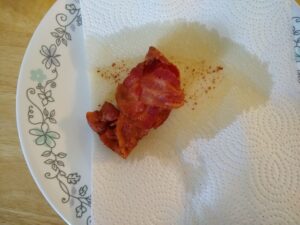 The bacon came out pretty well both ways. The pan fried bacon came out in crisp strips, and had a nice flavor to it. The air fried bacon tasted even better, although the strips curled up into each other and didn’t necessarily look as good.

Both methods did result in the bacon shrinking, though, something we’ve seen with most of our store-bought bacon, in or out of Aldi. In our experience, this is due to water content in the bacon, something we can avoid if we go with bacon at our local farmer’s market.

If you’re looking for a tasty bacon, Appleton Farms Premium Sliced Bacon came out pretty tasty for us. We like it better than the Appleton Farms Sliced Bacon in the cardboard box, and it cooked up crisply in both pan fried and air fried, although the bacon does shrink. As always, we’re interested to hear your experiences — good or bad — in the comments.