EDITOR’S NOTE: Since we first wrote this piece, some commenters have expressed a less-than-satisfied experience with Aldi bacon. They’re not alone — we’ve had some batches of Aldi bacon since this piece that have been fatty and hard to peel. We have plans down the road to revisit this product, but for now it’s enough to say that we’d love to hear your experience in the comments. And, of course, if you don’t like Aldi bacon, Aldi will refund the price and replace the product if you ask.

Aldi does breakfast. Lots of it. Cereal. Eggs. Sausage. Hash browns. Even pre-cooked foods. For a low-inventory grocer, Aldi keeps a pretty robust first meal selection, including, in some cases, multiple options. And this is all just the Regular Buy section: when you add in the occasional ALDI Find (Special Buy), the selection is even bigger than that.

Few things are more legendary in American breakfast lore than bacon. More than any other breakfast meat, bacon is sort of a cult in and of itself, bordering on obsession. To fully appreciate this, you don’t have to go much farther than Googling, say, bacon memes. On the other hand, health research has not been altogether kind toward bacon, so it’s probably a food best appreciated in moderation.

Aldi sells a few varieties of bacon as a Regular Buy, and occasionally adds even more as an ALDI Find (Special Buy). Nestled in the middle of the bacon options is this. 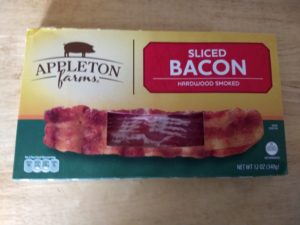 Appleton Farms Sliced Bacon, an Aldi Regular Buy, can be found in the refrigerated section of the grocer. It comes in a single 12-ounce package of vacuum-sealed plastic inside of a cardboard sleeve. (We purchased it as part of our Instacart test.) Prices vary, but in our experience this bacon is usually cheaper than what we can get at other stores.

Most people don’t need instructions for bacon, but this package actually comes with directions for pan frying, microwave, and oven. To pan fry, it recommends using low heat and turning frequently until it reaches “desired crispness,” followed by draining it on an absorbent paper towel. To microwave, it instructs consumers to place the bacon between paper towels on a microwave safe plate, then cook on high: 1 1/2 minutes for 2 slices, 2 1/2 to 3 minutes for 4 slices, or 3 1/2 to 4 minutes for 6 slices. Oven directions involve preheating the oven to 350 degrees, then using a flat baking dish and baking without turning for 10-15 minutes, draining afterward on an absorbent towel.

We almost always pan fry our bacon, which is a bit of an art because bacon can easily overcook. In a pinch, we’ll microwave, but we’ve never baked our bacon before.

Our experience with this Appleton Farms bacon has been consistently positive. It cooks easily, doesn’t shrink as much on the skillet as some bacon does, and has a light, crisp taste. The hardwood smoked flavor in this version is just right without being overbearing, at least in our view.

Nutritionally, of course, this is bacon, so be aware. 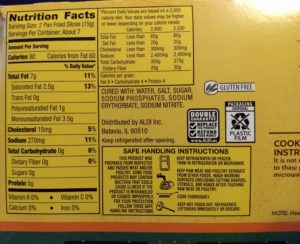 Appleton Farms Sliced Bacon is our go-to bacon for most occasions. It cooks up well, doesn’t shrink too much, and tastes awesome. Like pretty much all bacon, it’s a best-in-moderation food, but suffice to say we’re fans. Recommended.