In 1963, Florida-based Doric Foods introduced a tangy citrus drink known as Sunny Delight. In many ways, it was a product of its time, a combination of fruit concentrate, added sugars, and artificial flavors. In an era when Americans bought TV dinners and valued easy and processed, Sunny Delight fit right in.

In 1989, food giant Procter & Gamble purchased Sunny Delight, and in time would rename it SunnyD. The formula has evolved over time, with the introduction of artificial sweeteners and the addition of a number of different flavor versions. Fruit drinks like SunnyD have lost popularity in the 21st century, but you can still find them on grocery store shelves. 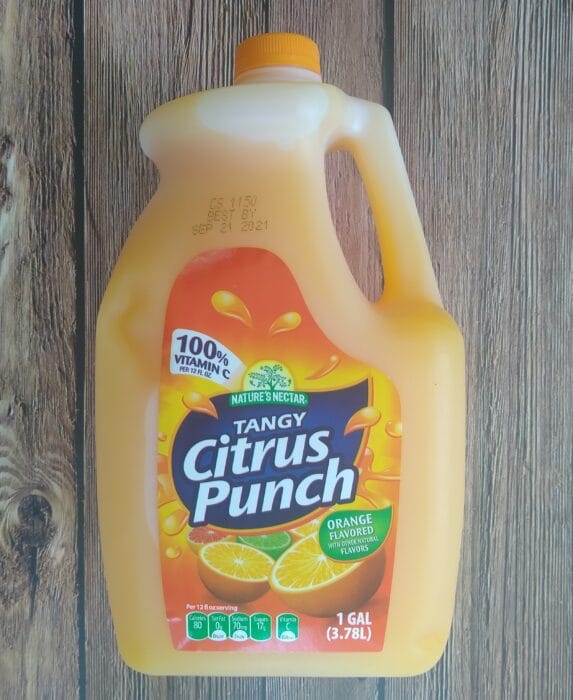 Nature’s Nectar Tangy Citrus Punch is an Aldi Regular Buy, which means you can find it in stores all the time. I found the jugs on the room-temperature shelves near soda and some of the fruit juices, but the label says that you need to refrigerate the container after opening it.

At the time of this post, it costs $2.49 for 1 gallon, or 128 ounces. That comes out to 1.9 cents an ounce. We also bought a jug of SunnyD at our local grocer. We got a 64-ounce container of the name brand on sale for $1.00, which comes out to 1.6 cents an ounce — less than the Aldi version. Normally, however, that same SunnyD retails at that same grocer for $2.19, or 34 cents an ounce, so in most cases the Aldi jug is significantly cheaper.

We did some comparisons of the two, starting with the ingredients label. For the most part, the two are similar, with similar calories and similar ingredients when you adjust for different serving sizes. Both, for example, contain high fructose corn syrup. Both also contain sucralose, which is a zero calorie artificial sweetener known more popularly by the brand name Splenda. Sucralose is added to fruit drinks like these to cut down on the calorie count. That can appeal to customers, but we don’t like them as much because they can actually trigger more sweet eating. Both SunnyD and Nature’s Nectar, then, have a mix of both some sugar content and some sucralose. 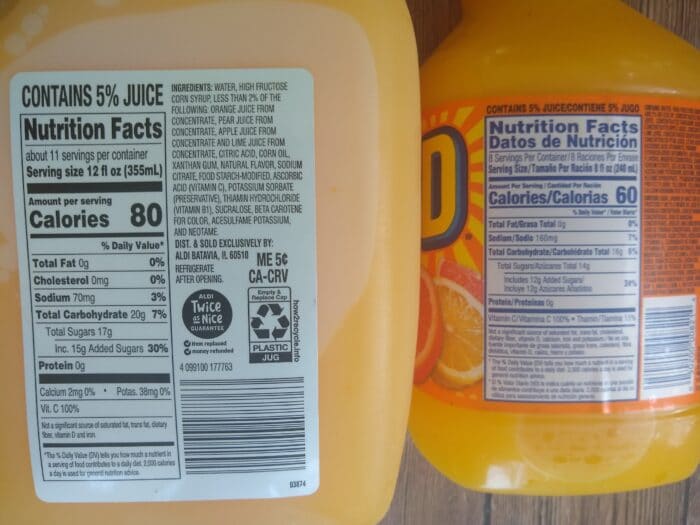 The Aldi drink on the left, SunnyD on the right. (Click to enlarge.)

One difference between the two is the actual fruit that goes into them. Interestingly, SunnyD and Nature’s Nectar have slightly different fruit ingredients. SunnyD has tangerine and grapefruit, while Nature’s Nectar has orange. (Both have pear, apple, and lime.) 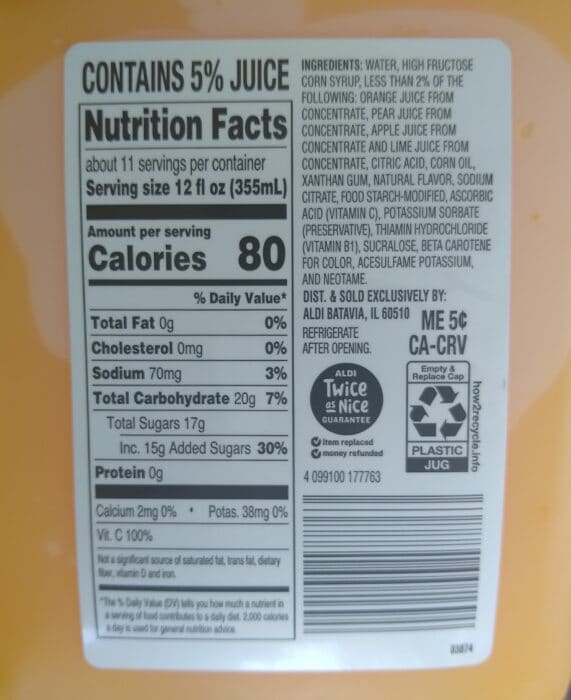 Our family taste-tested Nature’s Nectar and SunnyD, and we found them to be different. Nature’s Nectar is definitely sweeter, while SunnyD has a more tart taste that has a little bit of bite. Our family was split on which we liked better; my wife, who had SunnyD sometimes as a kid, liked the name brand better, while I preferred Nature’s Nectar. I think the Aldi drink is pretty good on its own, but I’ll admit it’s not a dead ringer for SunnyD. 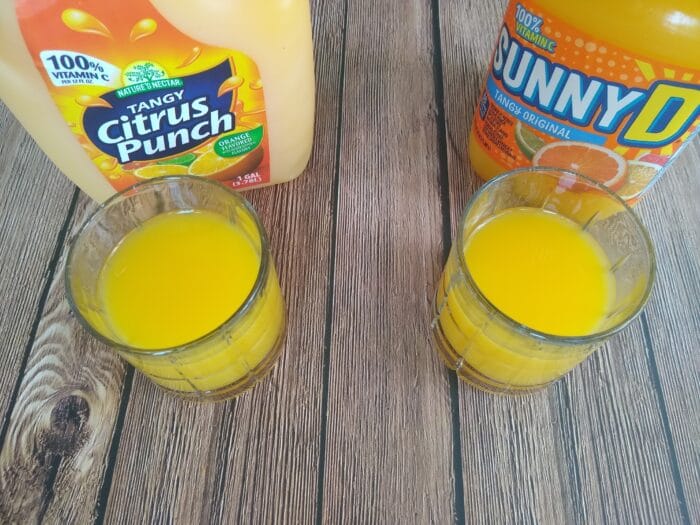 The Aldi imitation of Sunny Delight has a nutrition label a lot like Sunny Delight, but it doesn’t taste quite the same. It’s sweeter. On the other hand, Nature’s Nectar Tangy Citrus Punch is a decent alternative on its own merits, and — unless you find SunnyD on sale — is usually cheaper. Both contain artificial ingredients including sucralose, which may or may not be an issue depending on the consumer.