Aldi’s automotive products, most of them under the Auto XS brand name, seem to be semi-annual Special Buys. In other words, they seem to come and go at different times of the year, including the spring and summer. Not all of them are that way, but some are. One of them is this: 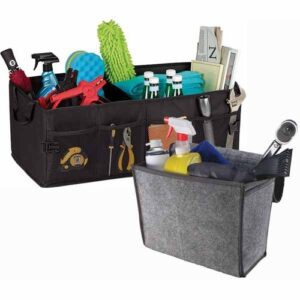 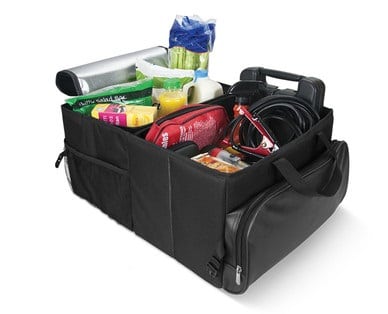 The Auto XS Trunk Organizer is pretty self-explanatory. It’s designed to go in your trunk and to organize stuff. When Aldi first began selling them, they came in a single configuration, the insulated model. Since then, the grocer has increased its assortment of trunk organizer colors and styles, which is a plus particularly if your trunk is small or regularly crowded, as the original model was pretty large when fully expanded.

For this review, we’ll be looking specifically at the insulated model, which we’ve tested. If you purchased one of the other models, we’d love to hear about your experience in the comments.

Like most things at Aldi, the original Auto XS Trunk Organizer is inexpensive, constructed well, and possesses some nice features that make it a valuable asset to any vehicle. The organizer comes out of the box in a flattened position, which it can be returned to at any time if you need space. All you do is unclip a clasp, and, like an accordion, the organizer folds out into a multi-space utility device. The organizer is made of solid material, opens and closes easily, and even has velcro on the bottom to help keep it in place when it’s sitting in a trunk or hatch. We have a rubber liner in our hatch and the velcro holds it securely there just as well as with a fabric trunk.

There are two large compartments that take up most of the space. One of them is a simple cube-shaped space that functions like a box for storing things; it’s an open cube with no lid. The second large compartment is lined on all sides with silver insulation and does have a zipper lid. We’ve never used it for food or drinks, but we imagine it can do the job of keeping things hot or cold for at least short periods of time.

Rounding out the bag are a few other nooks and crannies. There is a small side pouch that can be zipped up. There are some mesh compartments on the outside that can be used for storage. There are even handles on each side for carrying.

We have owned one of these for a time now and we’ve found it to be one of those things that we don’t use all the time, but when we do we’re glad we did. It’s a nifty place to keep things from jostling around in the trunk, and during the times we don’t need it we can easily fold it up and stow it flat on the trunk or elsewhere.

UPDATE (July 2019): We’ve had the insulated organizer for 3 years now and it continues to work just as it did when we bought it. It’s also held together pretty well, both inside and outside. We don’t use the insulated part for much more than more storage, but it’s nice to know it’s there if we need it.

It’s well-built, it’s versatile, and it’s got several different storage locations for whatever you might need to put inside it. Top it off with velcro on the bottom to keep it stationary and you’ve got a nice asset for any car trunk. Definitely recommended.