EDITOR’S NOTE: Updated with a one-year progress report. In addition, Aldi sold a quad charging station again in April of 2022 for the same price of $19.99.

Come the holidays, the Aldi center aisle turns into a little department store, with toys, clothes, stocking stuffers, cooking devices, and everything else. It brings out the Christmas shopping animal in any unsuspecting customer, even more than is normal for Aldi. I experience enough danger even when it’s not December.

One of the products I saw during the holiday season was a phone charging station from Aldi. Charging devices can be a challenge in a house, as it can involve a lot of cords and generally a tangled mess. A charging station has the potential to streamline some of that. 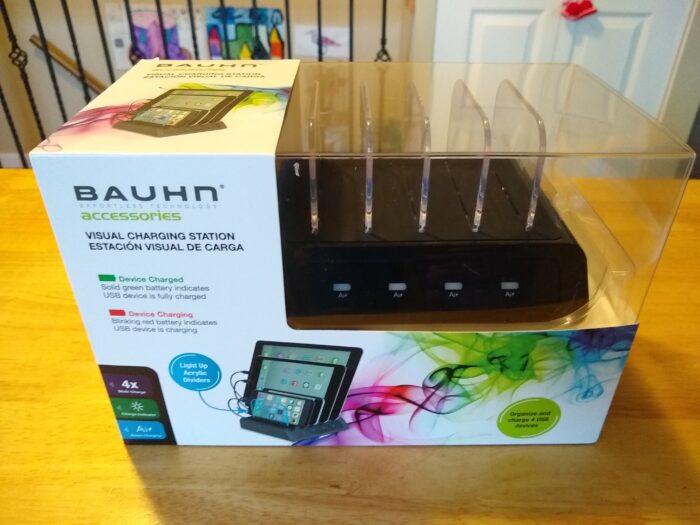 The Bauhn Visual Charging Station is an ALDI Find, meaning it’s a limited-time buy. At the time of this post, the charging station retailed for $19.99. That’s on the lower end of charging stations compared to what we’ve seen online. After-sales support is handled by Atomi USA, a New York-based consumer electronics company, and the charger comes with a 2-year warranty.

The station comes with the station itself and a manual. 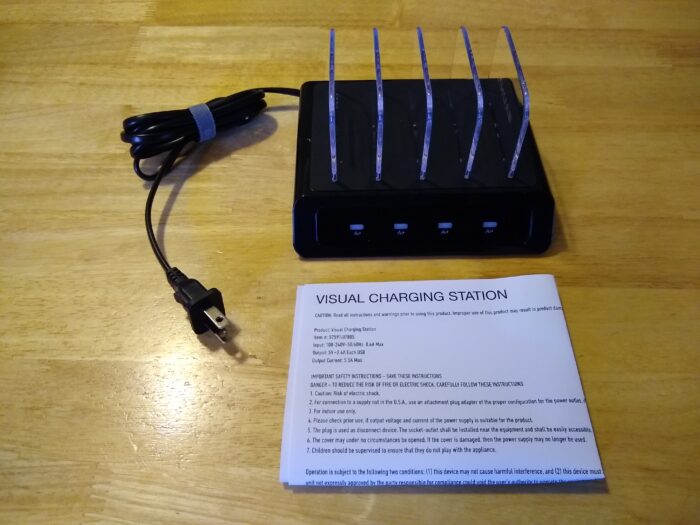 According to the packaging, features include:

Of note: this device operates on a universal power supply, meaning it can be plugged into power supplies in most parts of the world. Of course, ours comes with a North American plug, so you’d need a plug adapter to use it in, say, the United Kingdom, but if you had an adapter this device could conceivably be used to charge devices overseas. (It’s not particularly compact, though, so it’s probably not something I’d take on an overseas trip.)

Setup is as easy as plugging it in and then plugging in USB cords.

We tested the station using a number of older and newer smartphones we have around the house. When we plugged the devices in, a divider next to the device port lit up, as well as a charge indicator on the side of the station. The charge indicator was red when it was charging, and it turned green when done. 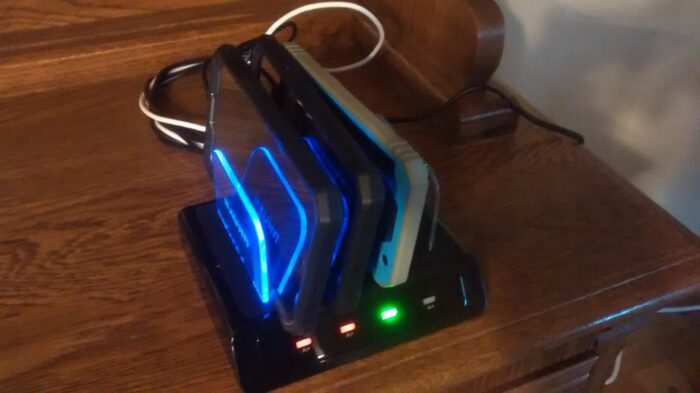 At work with a few smartphones. (Click to enlarge.)

It’s a slick-looking station, both in terms of form and in terms of the color displays. The dividers and the charging indicators are not only helpful, but they also look cool, too.

One important consideration: this station does not appear to support quick charge technology used in modern smartphones. We tested several quick charge-compatible smartphones, and none of them registered quick charging while docked, even with the phone’s factory USB cable. We haven’t done comparative tests yet to see how this charger charges compared to a quick charge port, but our guess is that this charger sacrifices some speed. That’s not a big deal if you regularly recharge your phone and you don’t need it right away: it could be an issue if you need a lot of battery charging in a hurry. In those cases, you might want to keep the original phone wall adapter close at hand.

UPDATE (December 2020): The charger still works well after a year of daily use. We use it for a variety of devices, and it does the trick, if not as fast as a quick charger. And yes, it still looks cool doing it.

The Bauhn Visual Charging Station is a nifty solution for organizing the charging of USB compatible devices. It does not appear to support the quick charge standard, but otherwise it seems to do a decent job of charging multiple devices, and it is generally cheap compared to other devices like this.