Skip to content
Home Features What is the Aisle of Shame?

What is the Aisle of Shame? 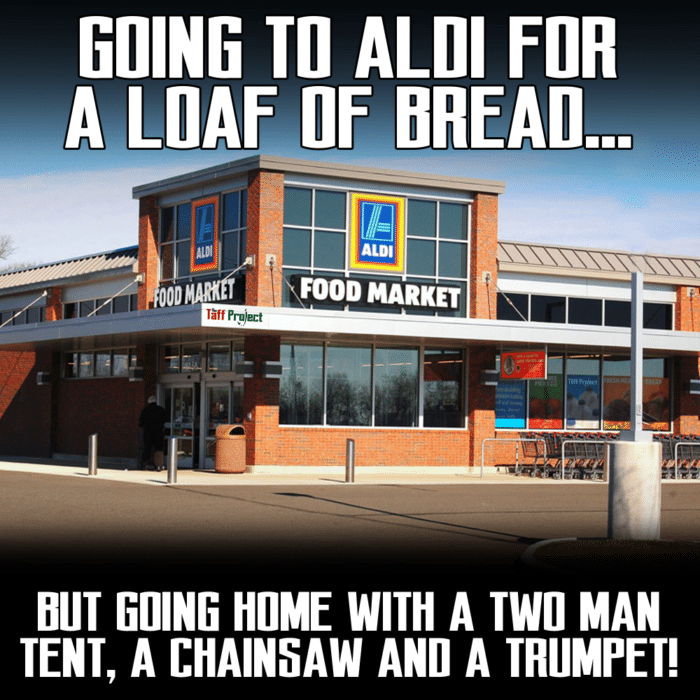 A famed meme of a famed place.

Some time in early 2019, I started noticing Aldi shoppers on Facebook using the expression “aisle of shame” when they talked about shopping at Aldi. My wife noticed it, too, and she has even used the expression from time to time.

It’s become common enough that I decided to look into the phrase. What is the aisle of shame, exactly? What does it mean? And where did the phrase come from?

What is the Aisle of Shame?

In strictly Aldi terms, the expression “aisle of shame” — sometimes abbreviated AOS — refers to Aldi’s middle aisle where the store’s rotating stock of ALDI Finds or Special Buys are kept. Many of these products are non-food items, and some can be quite a strange sight for a grocery store, like lawn mowers or tents. The “shame” seems to revolve around the joke that people go to Aldi intending to get bread and milk, but they end up shamefully drifting into the middle aisle and purchasing things they may not need, from teal cabinets to pressure cookers.

Aldi, it should be noted, didn’t create the expression and doesn’t use it.

The Origin of the Phrase

When it comes to expressions, some origins can be easier to figure out than others. We have a decent idea of where the expression “silver lining” probably came from, for example, but the origin of the word “OK” is a lot harder to figure out. I don’t expect anyone to do a serious etymological study of “aisle of shame” anytime soon, but I did try to dig a little bit to see where it might have gotten its start.

I started by floating a question out to various Aldi groups on Facebook and Reddit: Where did you first hear the phrase?

I knew the expression had to go back farther for that, so I did more digging.

Now, there are other uses of the expression “___________ of shame” that appear to be older than the specific phrase “aisle of shame.” The most common one I found was the expression “walk of shame,” which goes back to at least the 1990s, if not further. That expression can have one of a few different meanings, including some with PG-13 undertones that I’m not going to get into here. To what extent “walk of shame” is the predecessor to “aisle of shame,” I couldn’t say for certain.

The earliest I can find a reference to the specific phrase “aisle of shame” are in Google posts made in the mid-to-late 2000s. There are just a handful, and none of them refer to Aldi. Instead, the term was used during that time to refer to, among other things, the fantasy section of a bookstore, lines of food in a reality weight loss TV show, the aisle in Walgreens that stocks the most embarrassing products, and the long walk to one’s seat after being a late boarder on an airplane. The people who used the phrase came from the United States, Canada, and the United Kingdom, so it seems to be an expression used in more than one part of the English-speaking world. At some point it came to be applied to Aldi, but it was not original to it.

I also noticed that a pair of “aisle of ___________” phrases appears in searches specific to Aldi in the United Kingdom, both of them more vulgar than aisle of shame. The earliest I can date these terms is 2016, and the usage seems a lot more common in the last year than the years before. Americans don’t seem to use these terms as much as the British do, maybe because Americans tend to be a bit cleaner online than their fellow shoppers across the pond.

What Do People Think of the Expression?

When I first asked about the phrase on Facebook and Reddit, I realized that Aldi shoppers could be pretty polarized about what they thought of it. Some shoppers indicated that they thought aisle of shame was downright hilarious, while others hated it, preferring alternatives like “treasure aisle,” “aisle of style,” or “happy aisle.” The sticking point appeared to be the word “shame,” which implied that people who went into the Aldi middle aisle were doing something wrong or embarrassing, and not everyone liked that.

Aldi, for its part, doesn’t use the expression. It doesn’t officially have its own term, although in at least one press release its PR firm used the term “aisle of fun.”

Nevertheless, it’s become a common expression in Aldi fandom circles, and it looks to be around for awhile.

At least, until some other expression comes along and replaces it.