Certain corners of the internet were abuzz about Aldi’s Special Buy Belmont Cobble Cake weeks before it appeared in stores. Taste of Home was excited. The Kitchn was talking about it. Delish hyped it. So, naturally, when the long-awaited cobble cake showed up at Aldi, I bought one. 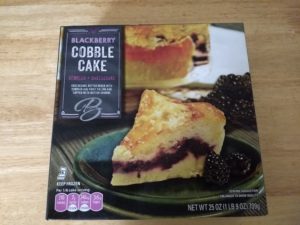 What is a cobble cake? I had no idea, except that it sounded like it involved a combination of cobbler and cake.

Aldi’s cobble cake package describes it as “cobbler + cheesecake” and goes on to say it is “cheesecake batter mixed with cobbler and fruit filling and topped with butter crumbs.”

Until I read the package myself, I had no clue that cheesecake was part of the mix. From that moment on, I was sold. If there is cheesecake, then I’m in.

The Belmont cobble cakes cost $5.99 and are available in two flavors: blackberry or peach. I bought the blackberry cobble cake because some members of my family don’t like peaches.

The cobble cakes are sold in the Special Buy freezer section at Aldi, and box says to keep the dessert frozen until you’re ready to eat it.

You have several options when it comes to how to eat the cobble cake and how to prepare it.

To serve it cold, simply thaw it in the refrigerator overnight.

To bake it in the oven, preheat the oven to 350 degrees. Bake the frozen cobble cake for 25 minutes with the lid on. Then remove the lid and bake an additional 15-20 minutes. This is how I prepared my cobble cake. 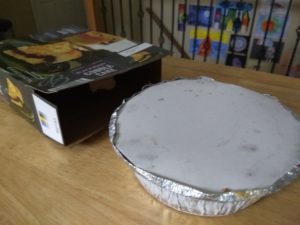 My cobble cake before baking, with a cardboard lid that remains on during the first part of baking.

To microwave, remove the cobble cake from the pan onto a microwave-safe plate. Microwave on high for 7 1/2 minutes. Microwave ovens may vary, so cooking time is approximate. 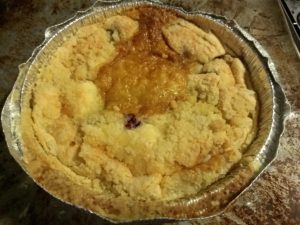 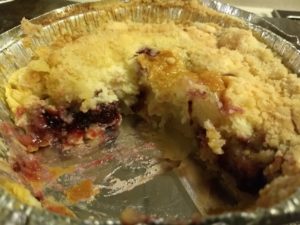 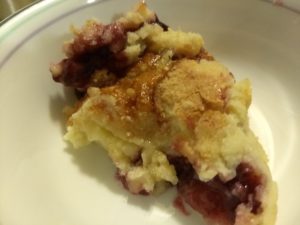 My family enjoyed this cobble cake. We definitely noticed and tasted the cheesecake element, which is really the best part alongside the layer of real blackberry filling. The butter crumb topping crisped up during baking and added a nice bit of crunch. This dessert is doughy, with a consistency similar to a cheese danish or coffeecake, but this is softer and made for eating with a spoon. It doesn’t come out of its baking pan in neat slices like a cheesecake; it spoons up like a cobbler.

This cobble cake is 25 oz. One serving is 1/6 of the cobble cake, which will net you 310 calories, 7 grams of saturated fat, 240 mg of sodium, and 36 grams of sugar. Yeah, this dessert is rich. That’s why it’s a good thing this is only available in Aldi stores for a short time. The good news, if you consider it that, is that the blackberry cobble cake also has 6% of your recommended daily value of calcium and iron, and 2% of your potassium.

Aldi’s Belmont Cobble Cake is a unique combination of cobbler and cheesecake. It is doughy, cheesy, and rich, with a layer of real fruit filling. If you enjoy cheesecake, cobblers, or danishes, you may like this dessert.