Figs are one of the oldest cultivated plants in the world. Archaeologists speculate that fig cultivation dates back to nearly 12,000 years ago, long before the likes of wheat or barley. Figs were commonplace in ancient Greece and Rome, and over the centuries have been planted all over the world, including the United States.

In 1891, Philadelphia baker Charles Roser developed and patented a machine that inserted fig paste into a pastry roll. A bakery based in suburban Boston, Massachusetts, purchased the recipe, mass-producing the treats under a name that combined the word fig with the nearby suburban town of Newton. Fig Newtons have been a staple on store shelves ever since. Now marketed simply as Newtons, they’re manufactured by Nabisco, which has moved around under several companies over the years.

Various store brands have manufactured their own imitation Newtons, including Aldi, which sells their take under the Benton house brand label. 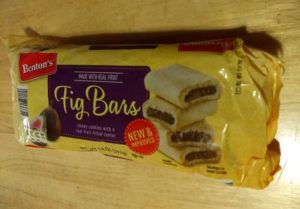 Benton’s Fig Bars are an Aldi Regular Buy, which means they’re in stores year-round. They come in a plastic bag that, when open, reveals two rows of the bars, each row set in a plastic tray wrapped in plastic. There are about 28 fig bars in each bag. At the time of this post, the packaging boasted that the recipe was “new and improved,” although we can’t speak to the older version alluded to there.

We can say, though, that these are pretty good. Taste wise, they are, to me, very close to a brand name Fig Newton, if not identical, and in terms of the texture it’s about the same. The outer cake is breaks off easily when chewed but isn’t crumbly, while the inner paste has that signature fig taste that is so familiar to people who’ve had Fig Newtons.

Nutritionally, despite the ancient history behind figs, fig bars aren’t exactly a health food. While low in fat, they’re rather high in sugar. Also, while they’re made with wheat flour, the bleaching process used to make the outer cake blasts most of the nutrients out, so other than a small amount of fiber, there is very little here that screams health, particularly in the vitamins and minerals category. Benton’s Fig Bars, notably, are pretty similar nutritionally to Fig Newtons. 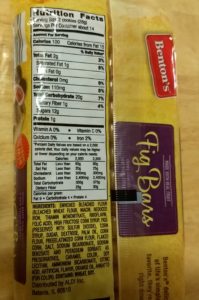 As far as (Fig) Newton imitations go, Benton’s Fig Bars are a pretty solid impersonation. The taste and texture are both good, with a chewy exterior and a sweet core. They’re not as healthy as you might expect, but for people searching for a cheaper alternative to the Nabisco classic, this is worth a look.