In 1977, two Jewish brothers who had immigrated from Iran to Colorado set their sights on creating a calzone-style pastry that could be heated in the microwave. They created a company called Chef America and, in 1980, released the Tastywich. In 1983, the brothers reformulated their product and gave it a new name: Hot Pockets.

It was the perfect 1980s pastry: frozen, microwaveable, and filling … a full meal, ready in minutes, in a little sleeve. By 2002, the company was a $2 billion product, and it was acquired by food giant Nestle. In recent years, sales have dropped, thanks in part to people wanting to eat healthier, but Hot Pockets continue to be a player in the food market. (According to the company, people on food stamps are major buyers of Hot Pockets.)

Aldi, as we know, is all about budget foods, and it has produced its own version of Hot Pockets. 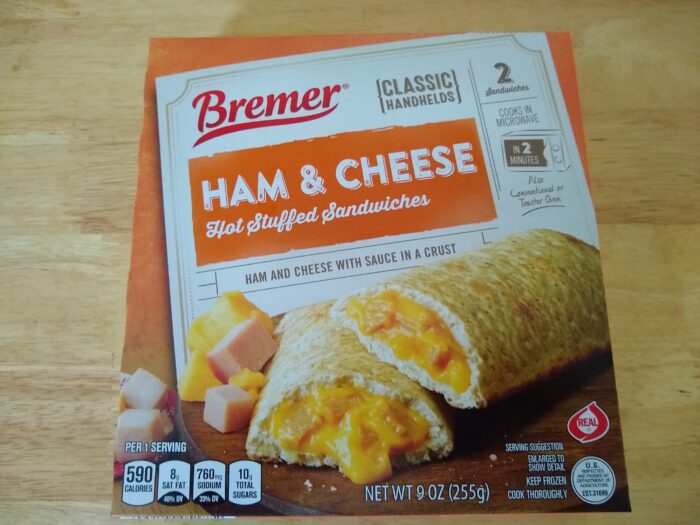 Bremer Stuffed Sandwiches are a Regular Buy, meaning that they’re in stores all the time. At the time of this post, they come in a box with two pastries and retail for $1.59, or about 80 cents per serving. Aldi sells two varieties of the sandwich: pepperoni pizza and ham and cheese, and Aldi also sells a gluten-free version under its liveGfree label. This review focuses on the ham and cheese version.

To microwave, you remove the individual sandwich from the box, then open up one end of the wrapper and place the frozen sandwich — still in the wrapper — on a microwave-safe plate. Next, you heat the sandwich on high for 1 minute and 45 seconds. (Cook time may be longer for microwaves less than 1000 watts.) After that, you let the sandwich sit for 2 minutes. Finally, you check to make sure the sandwich is cooked thoroughly to an internal temperature of 165 degrees, being careful, as the pastry will be hot.

To bake in the oven, you preheat the oven to 350 degrees. Next, you remove the sandwich from the wrapper — you won’t need it — and place the sandwich on a baking sheet. Next, place the sheet in the center of the oven, cooking for 28-30 minutes. Afterward, you let the pastry stand for 2 minutes, then check to make sure it’s cooked to at least 165 degrees, being careful, as the pastry will be hot.

As you can tell, the oven instructions take far, far longer, and I doubt most people will attempt to cook it that way for that reason unless they don’t have a microwave.

These sandwiches taste, to me, mostly like Hot Pockets. The crust is a little on the plain side but passable, while the filling is salty, cheesy, with enough ham to make it work. I wouldn’t say it’s a gourmet meal — and you probably wouldn’t expect it to be — but it mostly hits the spot.

The nutrition label is typical for a processed food: moderate amounts of fat, sodium, and carbohydrates, along with an ingredients list a mile long. The package notes that it does contain milk, soy, and wheat. 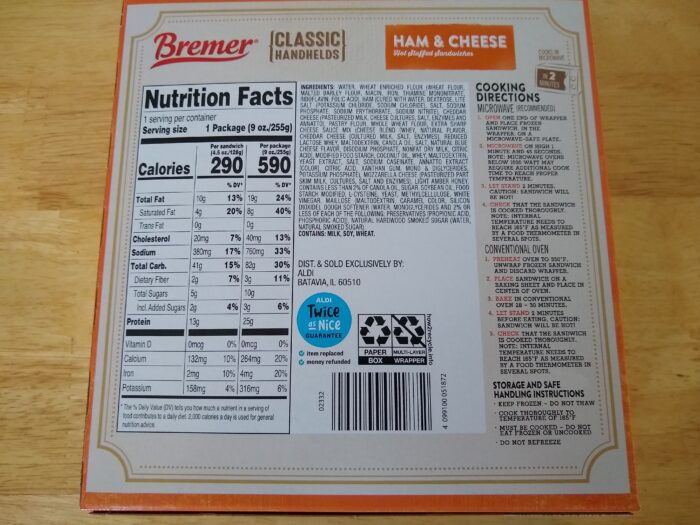 As far as Hot Pocket imitators go, Bremer Stuffed Sandwiches are a quick, easy, and relatively cheap alternative to the Nestle name brand. As with most frozen processed foods, there is a fair amount of fat, sodium, and carbs, and the ingredients list is anything but simple. For that reason, I tend to see this as an eat-in-a-pinch kind of a food rather than an everyday item, at least if I can get away with it.