I stumbled upon Aldi’s line of  liveGfree Stuffed Sandwiches almost by accident. I was looking for an easy, healthy, and preferably vegetarian frozen lunch option to take to work, and I was tired of paying high prices for bland food from other grocery stores. I first tried the Spinach, Artichoke, and Kale flavor and liked it so much that I tried the rest, too. At $2.99 for a 2-pack, each of these varieties is a bargain … but they vary in quality.

Each of these varieties can be prepared in an oven or toaster oven for a crispier crust, but if you’re in a hurry (and I always am at lunch time), you can cook them on High in the microwave for 2 minutes.

Since I teach, I’ve decided to give each of these a letter grade. Let’s start with the A’s.

I can’t overemphasize how good the Spinach, Artichoke, and Kale variety is. The filling is creamy, cheesy, chewy (that’s the kale), and spiked with lots of garlic. The crust is slightly sweet, chewy, garlicky, and you’d never guess it was gluten-free.

It’s honestly the best frozen stuffed sandwich I’ve eaten. Not that I’m a stuffed sandwich connoisseur, but I’ll admit to buying that popular name brand variety a few times in college. I remember those as filling and fatty/salty, but not exactly nuanced in flavor.

However, you won’t like these if you don’t like kale. It overpowers the spinach, and I couldn’t really tell that there were artichokes in the mix. But if you like kale, garlic, and cheese, then this sandwich is for you.

B+ for Effort: Pepperoni Pizza 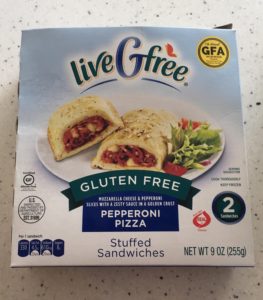 My kids helped me test the Pepperoni Pizza and Ham and Cheese varieties. They unanimously agreed that the pizza one is better because it had “tons of pepperoni.” I give it a B because I thought the crust had less flavor than the vegetarian varieties, and it could use more cheese and sauce. But if you like pizza, or if your kids do, then this is a quick and easy meal and (slightly) less messy than actual pizza. I’ll pick up more of these for summer lunches.

C is for Average: Ham and Cheese 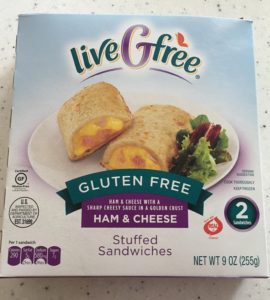 My 10-year-old is a sucker for anything labeled “Ham and Cheese,” and this was a disappointment to him. Yes, there was dramatic sighing. His biggest complaint is that despite the name, it barely had any cheese. “Ham and Bread” just doesn’t have the same appeal. The crust was fine, and the ham tasted the way ham should taste, but they definitely need more cheese to justify the name.

D is for Disappointment: Southwest Veggie 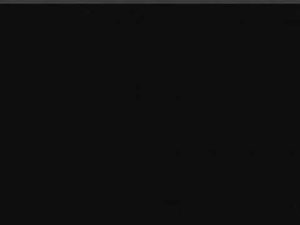 We’re so saddened by this pocket that we’re not even showing it.

Oh, Southwest Veggie, what high hopes I had for you! This was the second flavor I picked up, after falling madly in love with the Spinach, Artichoke, and Kale variety. I thought this would be another great option for a quick vegetarian lunch … and although it does fit the bill for “quick” and “vegetarian,” it’s not at all “great.”

If you want to know what this tastes like, just imagine mixing up some frozen corn, black beans, and the mildest, most flavorless salsa you can find. Don’t add any salt or seasonings at all, and stuff it into a chewy roll. It’s a combination of cheap “Mexican” ingredients without any real flavor or unity. And as nice as it is to find a vegan option, a little queso would have helped.

If you like the taste of kale, then I recommend stocking up on the Spinach, Artichoke, and Kale sandwiches for quick summer meals. Same goes for the Pepperoni Pizza flavor, though you might want to include a little marinara sauce on the side because they’re slightly dry. But I don’t recommend either the Ham and Cheese or the Southwest Veggie, unless you actively enjoy eating food that doesn’t taste very good. Life is hard enough without subjecting yourself to flavorless food.