Macaroni and cheese is as American as apple pie, and Aldi sells various kinds of it, from a premium shells and cheese to occasional Special Buy (ALDI Find) “deluxe” varieties. Sitting firmly at the budget end of the Aldi mac and cheese lineup — even by Aldi standards — is the Cheese Club Macaroni and Cheese Dinner, a box containing noodles, a pack of powder, and an obvious attempt to imitate Kraft Macaroni and Cheese.

In 2017, we put the Cheese Club Macaroni and Cheese Dinner to the review test. We … well, maybe it’s best if we let our words back then speak for themselves:

Aldi’s mac and cheese is … rather plain. The noodles are okay, but the cheese sauce adds only a modest amount of flavor. My first instinct was to add salt, but as loaded as this is with sodium already (although not as much as Kraft puts in theirs), that didn’t seem like a good idea. A little pepper doesn’t hurt, but it doesn’t remedy its underlying lack of taste.

We received a number of comments at the time, both on social media and in the post itself, offering suggestions on how to doctor up the mix. We heeded their advice, although the results weren’t exactly world-shattering; if anything, they helped elevate the mix just above the level of mediocrity.

A year later, however, we received a new round of comments, suggesting that Aldi had tweaked the formula — something we’ve seen the grocer do often — and that the new version was improved. We decided to take up the offer, giving the box another shot. 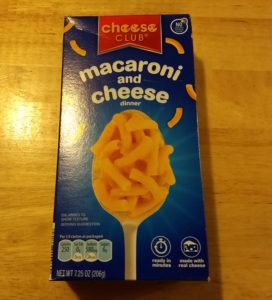 First off, let’s talk about what hasn’t changed. As with the earlier model, Cheese Club Macaroni and Cheese Dinner comes in a 7.25-oz. box with noodles and a “sauce packet” (aka powder). Cooking instructions are identical to before: boil 6 cups of water, cook the pasta in the boiling water for 7-10 minutes, drain (but do not rinse) the pasta, and then add the sauce packet, 1/4 cup of 2% milk, and 4 Tbsp. (1/4 cup) of butter or margarine.

But what has changed is the taste. It’s definitely better, with actual flavor, something that was altogether missing in the previous formulation. I found this mac and cheese to be good enough to not need salt, which is high praise, and while I did add a little pepper, this is something I do often with mac and cheese.

This improved taste comes at the expense of a little bit of healthiness. Perhaps not surprisingly, the sodium content has increased by about 80 mg over the old version, which may, in part, account for the increased taste. The sodium was already pretty high to begin with, and now it’s a little higher still, but at least this time there’s more flavor for the trouble.

I have to admit that I was wary of giving Aldi’s powder mac and cheese a second shot, but I’m pleased to report that it was worth the trouble. Aldi has revamped it, and it now sits a lot closer to its Kraft competition than it did before. For my money, I still prefer Cheese Club Shells and Cheese, but this is still worth a look, especially for the price.