No child growing up in the 1990s will forget “Macho Man” Randy Savage telling us to snap into a Slim Jim. The beef snack, which is a lot like beef jerky but also a bit different in texture from your typical beef jerky, was and is a popular snack for carnivores. Like most snacks, though, Slim Jims aren’t the cheapest thing per serving … which is why it’s awesome to see Aldi doing its best imitation. 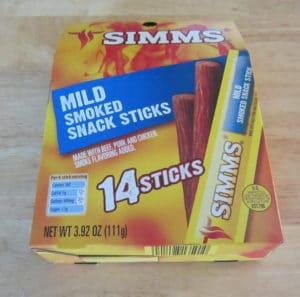 We spotted Simms Smoked Snack Sticks in the first aisle of our Aldi, where the grocer keeps most of its snack foods. The snack sticks come in both original and mild, and because we’re preferential to mild we grabbed the latter. The sticks come in a small cardboard box with a pull-tab, and inside are 14 individually packaged beef sticks that look a whole lot like their name-brand counterparts.

And they taste like them, too. I’ve had my share of Slim Jims in my life, and these taste … well, like Slim Jims, right down to that familiar seasoned flavor. The texture is right, too: they have that same hard jerky outer layer and that same softer-but-still-jerky-like inner layer.

That’s not the only similarity between Simms and Slim Jim. An 8g Simms stick has a similar amount of calories (40), fat (~4g), cholesterol (~7mg), and sodium (~122mg) to a Slim Jim, with any differences being pretty small. As you might guess, beef sticks like these are not good for you: a serving size (4 sticks) has about 20% of your daily recommended amount of fat and sodium, and the sticks have little in the way of vitamins and minerals. Sure, they’ve got protein, but that probably won’t sway your cardiologist. Then again, you probably already knew that.

Unfortunately, this is one area where Aldi doesn’t really win out on price. The Simms sticks we got from Aldi were $2.69, or about 19 cents for each stick. Slim Jims at our local grocer run about the same: 19 cents for a same-sized stick. The upside from Aldi is that you can get that price per stick with fewer sticks, so your overall box price at Aldi will be a little smaller, but as far as deals go, Aldi doesn’t exactly blow the competition away with this product.

Aldi Simms Smoked Snack Sticks are a great imitation of a Slim Jim, but they also cost roughly the same per stick around here as the name brand, so you may not save much going the Aldi route in this case. Still, they’re every bit as tasty as the name brand. Just don’t confuse them for a health food.