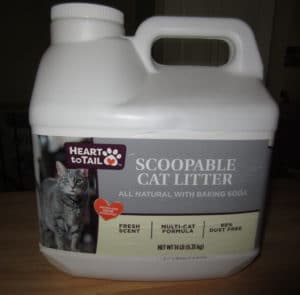 In many ways, this litter formula is similar to its predecessor. It is all natural with baking soda, and it claims to have a fresh scent and be 99% dust free. It’s also described as a multi-cat formula.

It’s sold in a 14-pound plastic jug, so it’s the same size as the previously offered Fine Feline litter. The ingredients are natural clay, baking soda, and fragrances, and it’s made in Canada. The jug advertises that this litter features “moisture activated clumping” and is “scoopable to keep the litter box fresh.” It also “contains baking soda for superior absoprtion and deodorizing.”

To use, the jug instructs to pour the litter into your cat’s box to a depth of 3 to 4 inches. If you are using Heart to Tail cat litter for the first time, an empty litter pan may require one or two jugs depending on the size of your litter box. The litter will form a clump around liquid waste for easy removal; use a slotted scoop to remove liquid waste clumps and solid waste on a daily basis. Add the rest of the litter in the jug as needed to maintain the proper depth in the litter box. After starting, the label says one jug should last up to 2 months (less with more than one cat).

Now, on to whether this cat litter is any good or not …

Some common complaints about the old Fine Feline litter were that it was dusty — a big cloud would rise up whenever I filled the litter box, and small clouds would rise when I stirred the litter to scoop it — and it wasn’t as good as name brand Tidy Cats at controlling odor.

The Heart to Tail litter still feels very dense and heavy when I scoop it, similar to the old Fine Feline litter. My slotted scooper doesn’t move through the litter as easily as it does through Tidy Cats. I also noticed liquid waste didn’t always clump as well with the new Heart to Tail litter, sometimes leaving sticky, moist clumps.

So overall, the new Heart to Tail Scoopable Cat Litter is marginally better than its Fine Feline predecessor in terms of dust and odor control. But name brand Tidy Cats is still far superior.

Aldi recently changed its cat litter from the Fine Feline Scoopable Cat Litter to the Heart to Tail Scoopable Cat Litter. The formula seems to have been improved a bit, as the new litter is slightly less dusty and slightly better at odor control than the old litter. However, the Heart to Tail litter still has some problems with dust and smell, and liquid waste doesn’t always clump well. I’ll be sticking with name brand Tidy Cats.