I enjoy cooking but don’t do much traditional baking. However, we were in need of a rolling pin when we made elephant ears recently, so it seemed timely when Aldi offered a rolling pin among other Special Buy kitchen essentials. 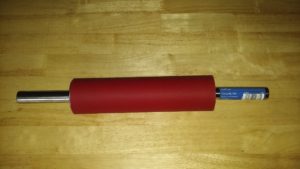 There is nothing very special about Aldi’s Crofton rolling pin. It’s red, with metal handles and a metal core. The rolling surface is covered with a semi-soft silicone-type material. It is recommended that you only hand wash it. It is made in China and is really lightweight, not like the old marble beast of a rolling pin my mom used to use in her kitchen. If you’re a hard-core baker, you may want a more heavy-duty rolling pin, but if you only need a rolling pin for the occasional pie crust, this should do the trick.

Aldi’s Crofton rolling pin is an inexpensive kitchen tool that will get the job done, but if you do a lot of baking, you may want something more heavy duty.