Earlier in the year, we stumbled on the Baker’s Corner Funnel Cake Pitcher and Mix and decided to try it out. (We liked it.) Then, a few months later, we came upon this little surprise in the Special Buy section: 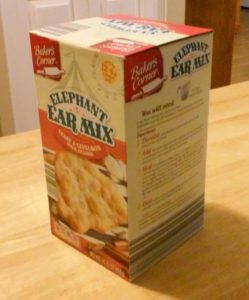 How could we not try this?

First, for the uninitiated: elephant ears are a distant dessert cousin to funnel cakes. Like funnel cakes, they’re made of dough, dropped into oil to cook, then given a sweet dusting. There are differences in preparation, texture, and, to a degree, taste, and the two have differing levels of popularity in different parts of the United States. 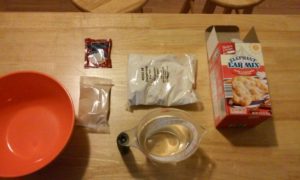 When we made the funnel cake mix, it was pretty simple — mostly a matter of mixing ingredients, then pouring them into 350 degree oil. The elephant ear mix is messier, longer, and more complicated. The first step involves dissolving the yeast in the water, followed by mixing the yeast and water into the mix, followed by kneading the dough into a smooth, wet mix. (For those unfamiliar with working with dough, a word of advice: put a little flour on your hands before working the dough. It’s sticky.)

Now, you have to cover the mix and wait for 30 minutes.

When the 30 minutes are up, the dough is to be portioned into 1-2 inch dough balls, then spread out on lightly floured parchment paper. (We didn’t have a rolling pin so we used floured hands.) From there, the mix is dropped in an oil-filled skillet at 375 degrees. We used a Dutch oven.

Dropping them in the oil is one of the more potentially dangerous parts of the job. One might be able to use a spatula dusted with flour, but we felt hands would be more precise for dropping them in. For this step we strongly advise 1) again dusting your hands with flour and 2) pulling your hands back from the oil as soon as you drop them to avoid being hit with hot oil.

From there, the elephant ears are cooked for 30-60 seconds on each side, then removed to be dusted with the cinnamon-sugar mix. We recommend putting them on a plate with a paper towel, in order to soak a bit of the oil out.

The box said it was good for a dozen elephant ears of six inches each. We ended up with seven, and not all of them were six inches. This may have been due in part to the fact that we didn’t roll them with a pin, but we also felt they were pretty thin on the parchment paper, so we’re not sure if there was any way to get more out of the mix. Given that we also came up short on the projected serving count for the Baker’s Corner Funnel Cakes, we’re not totally surprised, although the price on this is so good — $2.50, the same as the funnel cakes — that it’s not a huge deal.

As for the taste, they were pretty good. They had a nice blend of sweet with a bit of salty. Some of them were a bit tougher and less airy than others, though we wonder how much of that was user error in making them rather than flaws in the mix itself.

As one of the more unique offerings in the Aldi lineup, the Baker’s Choice Elephant Ear Mix isn’t a bad bet for fans of the carnival treat. Just be aware that they’re a bit more work than funnel cakes.