EDITOR’S NOTE: Read our review roundup of many of Aldi’s vegan Earth Grown products at this link.

Aldi just introduced a new line of vegan products ranging from meatless burgers and meatless meatballs to “Mozzarella Style Shreds.” While I’m not a vegan, I do like a good veggie burger. When the Earth Grown product line hit store shelves, I picked up the Vegan Southwest Quinoa Crunch Veggie Burgers to try. 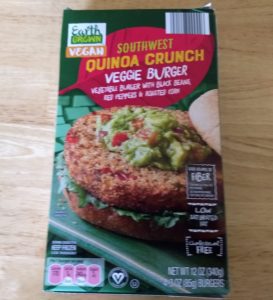 They’re advertised as a good source of fiber, with 170 calories, 4 grams of protein, 1 gram of saturated fat, 8 grams of total fat, and 2 grams of sugar per serving. They are low in saturated fat and are cholesterol free. They’re also certified vegan by vegan.org.

Overall, I liked the Southwest Quinoa Crunch Veggie Burgers. They are filling, and they have a nice crisp texture, especially around the edges. I could taste the corn and beans, and the pepper taste was not overly strong. If you’re not particularly a fan of quinoa, it blends into the rest of the burger, so this might be a good way to increase your intake of this healthy grain. 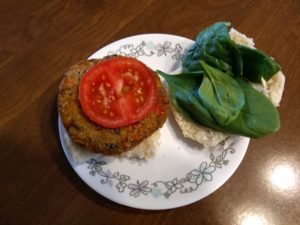 The only slight drawback is that the burgers get a bit floppy when they are not frozen solid. I had to be careful when flipping them halfway through the heating process and also when transferring them from baking pan to bun. When I had eaten about half of my burger, small sections of it began falling out of the bun onto my plate. I had to reassemble my burger twice, stuffing chunks of veggie burger back into the bun and carefully holding it all together. To be fair, I think a lot of veggie burgers tend to fall apart easily, regardless of the brand. They are simply different from traditional beef or turkey burgers in that respect.

The burgers should be kept frozen until ready to use. They can be prepared in the oven, toaster oven, skillet, or microwave. The oven is the preferred method.

To prepare in the oven, preheat the oven to 450 degrees. Place frozen burgers on an ungreased baking pan. Bake approximately 5 minutes until browned. Carefully flip and cook an additional 4 minutes until heated through and well browned.

To prepare in the toaster oven, preheat on broil. Place frozen burgers on an ungreased tray. Broil approximately 8 minutes. Carefully flip and cook an additional 6 minutes until heated through and well browned.

To prepare in the skillet, preheat a non-stick pan over medium heat. Cook until first side is browned, approximately 7 minutes. Carefully flip and cook an additional 4 minutes. Continue cooking, flipping as necessary, until heated through and well browned.

To prepare in the microwave, place one burger on a microwave-safe plate. Cook on high for 1 1/2 minutes. Carefully flip and cook 1 additional minute. The burger should be hot throughout but will not brown.

Aldi’s Earth Grown Vegan Southwest Quinoa Crunch Veggie Burgers, part of the store’s new vegan line, are winners whether you’re vegan or not. They’re a healthy alternative to traditional beef burgers, and they taste good. Just be aware that they don’t hold together as well as meat-based burgers. Recommended.