Aldi keeps introducing new products in its Special Buy (ALDI Find) Earth Grown vegan line, including the Earth Grown Non-Dairy Frozen Dessert. This is ice cream that substitutes almond milk for cow’s milk. No one in my house eats a strictly vegan diet, and no one here is lactose intolerant, but we had to try this new product simply out of curiosity. We wondered how it compared to regular ice cream in terms of taste and texture. (Be aware that this is a limited-time ALDI Find product, and once it’s gone, we don’t know if or when it will return to Aldi.) 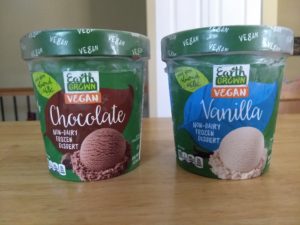 The Earth Grown Non-Dairy Frozen Dessert comes in a one-pint container (473 mL) and nets three 2/3-cup-sized servings per container. In other words, these are small, so don’t eat the entire container all at once unless you want to eat 600 calories in one sitting. But if you do, I won’t judge. This sold for $2.99 per container at the time of purchase, and it comes in three flavors: vanilla, chocolate, and mocha fudge. In my house, coffee = yuck, so I skipped the mocha fudge and bought just the vanilla and chocolate.

Be aware that whatever flavor you buy, it’s also going to have a noticeable coconut flavor and almond notes. That’s because almond milk is the main ingredient, and coconut oil is a key ingredient as well. Many vegan “ice creams” are actually made with coconut milk as a base, so Aldi’s version is a little different because almond milk is the primary ingredient rather than coconut milk. The coconut flavor is still very much there in these Earth Grown frozen desserts, though. I happen to like the taste of coconut, but people who don’t like coconut may not want this product.

Also, if real, whole food ingredients are a priority, and if you like ice cream that has only basic, easily identifiable ingredients like milk, cream, and sugar, then you may be disappointed by commercial vegan alternatives. The Earth Grown vanilla and chocolate flavors both contain carob bean gum and gellan gum, which are common thickeners added to a variety of foods. The mocha fudge flavor probably contains these as well. These gums are not automatically bad in small amounts, but it’s good to know what these ingredients are. 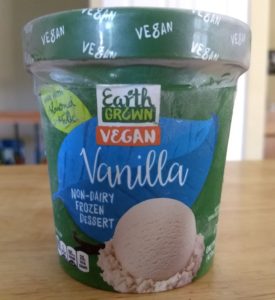 My kids liked the vanilla flavor the best. It is creamy, with a nice vanilla flavor with those coconut and almond notes I mentioned earlier. It has a texture that is almost indistinguishable from popular regular ice cream. It scooped nicely and had a smooth taste. It does not have those classic black vanilla bean specks like many quality ice creams often have. 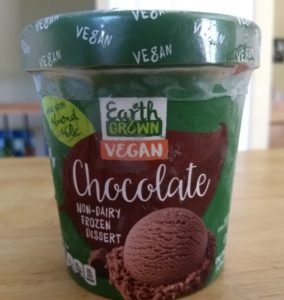 My husband and I thought the chocolate flavor was fine (we liked it as well as the vanilla), but one of my kids didn’t care for the chocolate. It’s just a matter of personal taste. Again, this is more like chocolate-coconut-almond ice cream rather than just chocolate. We found this flavor to be just as smooth and similar to regular ice cream as the vanilla flavor.

There was one odd thing I noticed on the chocolate flavor’s nutrition panel. It claims to have 200 calories per serving and three servings per container, which would add up to 600 calories for the entire container if you do some simple math. However, the bold print on the back of the carton indicates the container has a total of 610 calories. Apparently you get additional penalty calories if you eat the entire container in one sitting. (I’m kidding: it’s because of the FDA’s rounding rules on nutrition labels.) 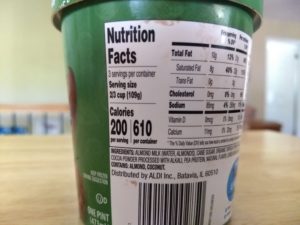 Aldi’s Special Buy (ALDI Find) Earth Grown Vegan Non-Dairy Frozen Dessert has such a similar taste and texture to regular ice cream that it seems nearly indistinguishable. This dessert comes in vanilla, chocolate, and mocha fudge flavors. The main ingredient is almond milk, and coconut oil is also a primary ingredient, so the dessert has a noticeable coconut flavor and almond notes. The ingredients in this vegan “ice cream” are more processed and include gellan gum and carob bean gum, but if you’re looking for a dairy-free frozen treat, this is smooth and creamy and worth a try.