When I heard that Aldi was branching out into new territory with its non-dairy ice cream, I knew I had to try it. My local Aldi had two flavors of Earth Grown Vegan Ice Cream Made with Oat Milk: Chocolate and Cold Brew. I grabbed both, because you never know how long these ALDI Find (Special Buy) products are going to stick around. In fact, I think they were also supposed to have a vanilla flavor, but I couldn’t find that even on the day of release. [EDITOR’S NOTE: Joshua was able to find the vanilla flavor, and his thoughts are farther below.]

I love ice cream and since I’m allergic to dairy, it’s exciting to see how many places are experimenting with non-dairy flavors. The problem is, these options are usually cost prohibitive, with some small pint-size ice creams costing up to $8. Thankfully, Aldi has our back with these pints coming in at just $2.99.

The chocolate and cold brew ice creams are not just dairy-free and vegan, but they are free from the top 8 food allergens that affect the majority of people, making them a great option for families or hosts who want to be able to serve an allergy-friendly dessert. The vanilla cookie chip flavor, however, contains wheat and soy.

Earth Grown Non-Dairy Frozen Desserts have been on Aldi’s shelves before, but this is the first time that they have been made from oat milk. Previous varieties have had a coconut and almond aftertaste. I expected the same with the oat milk, but I’m pleasantly surprised that is not the case. The chocolate flavor tastes like chocolate and the cold brew leaves with you feeling like you just had an iced coffee. Oat milk itself is made from soaking oats in water and doesn’t have much of a lingering flavor.

Opening our first pint, and then the second, I noticed that both of these oat milk-based desserts seemed more scoopable than my previous experience with ones made with almond milk. I’ve left almond milk pints out on the kitchen counter for five minutes or so just before I could put a spoon in without bending it. 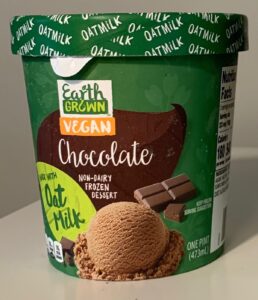 The chocolate flavor is what you’d expect from chocolate ice cream. I think it was the favorite in our household, based on flavor alone, and also being able to add toppings. It was a good texture and scooped into a cone easily, without having to leave it out of the freezer for a while. 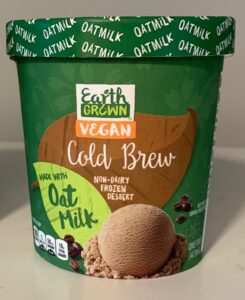 The cold brew flavor is definitely for people who love coffee ice cream. While it is definitely coffee flavored, the combination of the sweet and creamy ice cream really makes it less of a cold brew and more of an iced latte. I would say it’s not as good as the Earth Grown almond milk mocha fudge ice cream Aldi sold previously, but that may just be personal preference because I like the combination of chocolate and coffee in my ice cream. 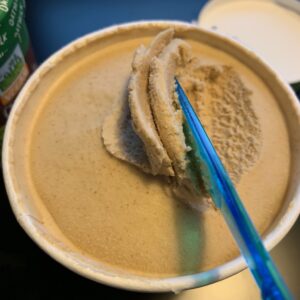 This one was also a good texture and scooped well, but I think the chocolate was a bit creamier tasting.

Just as with past Earth Grown Non-Dairy Frozen Desserts, both of these flavors contain some extra ingredients that may not be easily recognized such as carob gum, but this is a common thickener added to commercial vegan alternatives.

Both flavors list calories for the entire container as 540. That’s at least 100-300 calories less than other non-dairy ice cream pints from brands like So Delicious, Haagen-Das, and Ben & Jerry’s. 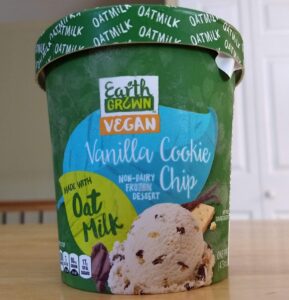 The vanilla flavor is a combination of vanilla, chocolate chip, and graham cracker. It’s not as creamy as the chocolate, but it has a pretty good vanilla flavor. Like with the other flavors, the oat milk has a neutral taste, so it doesn’t interfere with the vanilla the way almond milk does.

One serving has 200 calories, 7 grams of saturated fat, 90 mg of sodium, and 17 grams of sugar. That’s slightly higher in calories than the other two flavors.

It contains soy and wheat.

Aldi’s Earth Grown Vegan Non-Dairy Frozen Desserts made with oat milk are an excellent addition to the store’s healthy alternatives, vegan, and allergy-friendly products. While still not as great as “real” ice cream, these flavors are a good step closer to the delicious dessert we are trying to replicate. I’d highly recommend as a replacement for other more expensive dairy-free options.

Katelyn Bolds is constantly on the hunt for new ways to eat clean without breaking the bank. Recently she traded in Whole Foods for Aldi and isn’t looking back. She works full-time in Communications at a Chicago-area church. You can find her at boldhomestead.com.