Aldi’s checkout aisle is the stuff of legend. Aldi employees are trained to move at a clip that puts almost every other shopping experience to shame, so much so that some people have actually complained about how they wish the Aldi employees would slow down a little. (For the record, we’re not complaining.)

In the blur of the checkout aisle, one might be forgiven for not giving a ton of thought to the little things Aldi tempts you with along that final stretch. After all, you have other things to worry about … and the checkout aisle’s offerings aren’t quite as fabled as the gauntlet of junk food that is Aldi’s first aisle. But if you do stop to look, you’ll see a small collection of batteries, hand sanitizer, and other little things that beg you to spend a little bit more before you leave.

As is the case with most grocers, gum is one of the things you’ll find in the checkout aisle. And while Aldi sometimes stocks name-brand gum, it also has its own house brand. 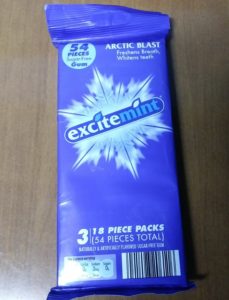 Excitemint Gum is an Aldi Regular Buy, meaning you can find it pretty much all the time at your local Aldi. The version we saw was a three-pack, with 18 pieces of gum per pack: a total of 54 pieces. This gum is sugar-free and claims to “freshen breath and whiten teeth.” At the time we bought it, the three-pack went for $1.69. This was a lot less than what it would cost for me to get Dentyne Ice ($2.24 for 48 pieces) or virtually any other gum I could find. 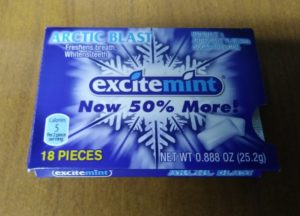 An individual pack. It can be separated into two packs of nine pieces. (Click to enlarge.)

I saw the gum in a few flavors, including peppermint, spearmint, sub-zero, and arctic blast. (I was disappointed to see that cinnamon was not among the options.) I decided to try the arctic blast. It has a semi-hard exterior shell that breaks easily once you bite into it. From there I felt a few tiny crunchy bits which I took to be the “arctic blast” flavor, and as I continued to chew the flavor grew steadily stronger. I didn’t exactly test my breath on anyone else, but my mouth did feel fresher.

The flavor didn’t last for a terribly long time: after about 10-15 minutes it seemed like the favor was waning. This is maybe a little shorter than other mint-type gums I’ve had before, although I’ve found that many mint gums don’t seem to hold flavor for too long. Also, the gum piece felt a bit on the small side compared to some other brand-name gum I’ve had before. As it turns out, Excitemint Gum is slightly smaller than Dentyne Ice — about 1/10 of a gram per piece less — but otherwise it is pretty much identical in terms of nutritional stats to Dentyne. 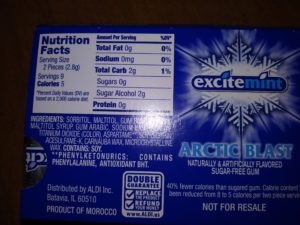 It’s not a world-beater as far as gum goes, but if you’re looking for an adequate breath freshener and teeth cleaner, Excitemint Gum might be worth picking up from the Aldi checkout aisle. I still prefer brand-name gum, personally, but this stuff works. Just as importantly, it costs a lot less than any brand-name gum I’ve seen.