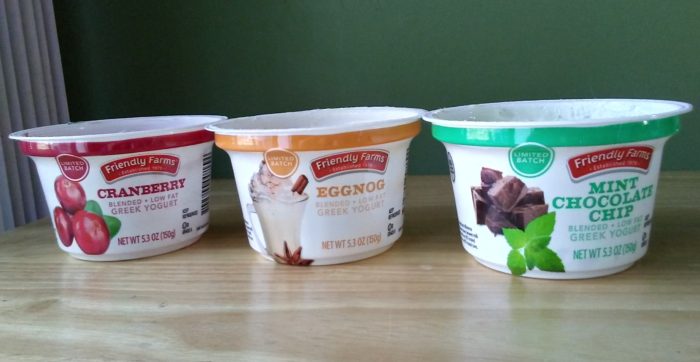 Greek yogurt is one of our favorite treats, and my family is always eager for new flavors to try! My daughters have been eagerly awaiting the winter “Seasonal Flavors” at Aldi for the past few weeks. They were excited to find them in stock: Cranberry, Eggnog, and Mint Chocolate Chip. These are $0.79 each, the same price as the Regular Buy Greek yogurt flavors at Aldi. 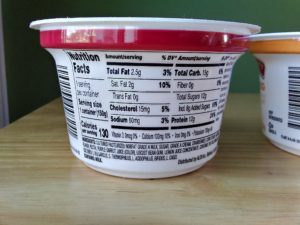 The flavor of the Cranberry yogurt is mild, no real cranberry flavoring coming through like we expected. (We had wondered if it would be very tart.)  Instead, there are bits of boiled cranberry fruit blended in, which adds a bit of flavor when you encounter some. At 130 calories, it has the least of the three seasonal flavors, but it also has the least excitement. This yogurt isn’t bad at all; just wasn’t as good as we had hoped—as we all love cranberries. It wasn’t our favorite, but it must have been someone’s, as three of the four display trays had already been emptied of only the cranberry flavor! 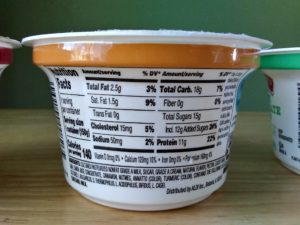 Eggnog as a yogurt flavor seemed an obvious win, and it went over well here both with those who do and do not like eggnog. Initially, the flavor is only of creamy spices, but each of us recognized the eggnog flavor in the aftertaste. This one is only 140 calories, so it’s a healthier alternative for those who enjoy the flavor of eggnog. 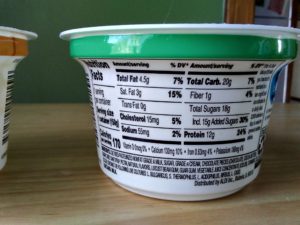 We were all excited to try the Mint Chocolate Chip, and we were not disappointed! It is minty without being overly strong, and the flakes of chocolate chip add just the right amount of texture. We were nervous about the color making it seem weird, though we found it to be a pleasant pale green color. This is definitely the most decadent of the flavors at 170 calories and reminds me more of pudding!

Overall, these 3 winter flavors all pass our taste test. Eggnog and Mint Chocolate Chip will definitely be repeat purchases, but the Cranberry isn’t better than some of our regular berry-flavored Greek yogurts from Aldi.