Each month we try to plan a variety of multi-cultural food into our menu. Lately we have been having lots of Mexican and needed to branch out a little. When these three Asian sauces recently appeared at Aldi as Regular Buys, it became an excellent motivation to go that direction. Thus, we decided to see if we could imitate some of our favorite dishes from our favorite Chinese food chain restaurant. 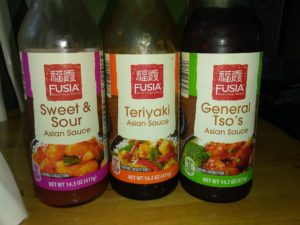 Fusia Asian Inspirations sauces all come in 14.5-oz. glass bottles with short, wide necks. The three I’m reviewing here are are all Regular Buy items and sell at the time of this post for $1.99.

For taste-testing purposes, we sat down with bowls of chicken, noodles, and broccoli, and proceeded to add a different sauce to each bowl. The first thing I noticed was that water, sugar, and corn starch were three of the first four ingredients in each sauce, with vinegar coming before the corn starch in the Sweet & Sour sauce. Soy sauce was the number three ingredient in the Teriyaki and General Tso’s.

Overall, I was impressed by the “real” ingredients in each sauce. It was nice to recognize such things as tomato paste, pineapple juice, and crushed red peppers listed on the back. (More on ingredients in a moment.)

Sweet & Sour was almost exactly what we expected. The bright orangey-red color is transparent, and the taste is similar to what we usually find in the little plastic packets in Chinese restaurants. The flavor definitely reflects the combination of sugar, vinegar, and tomato paste found in the ingredients. What makes this a bit different, though, was the consistency, because it is much thicker than we expected. The Sweet & Sour sauce has 25 calories per tablespoon and 6 grams of sugar. 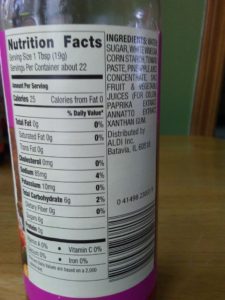 Sweet and Sour ingredients and nutrition information. (Click to enlarge.)

Teriyaki is a favorite around our house and was already one of our typical purchases. It is salty and just a bit sweet, but not tart. The caramel color matches what I expect from a Teriyaki sauce and the addition of sesame seeds gives it a welcome burst of flavor when you bite into one. Not only was it good in stir fry, but it has also begun to replace BBQ dipping sauce when we have pork steak or pork roast. The Teriyaki sauce has 20 calories per tablespoon and 5 grams of sugar. 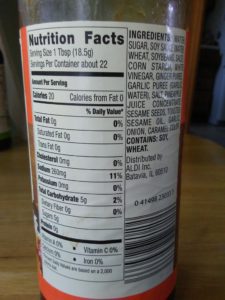 General Tso’s was the spiciest, as predicted. It was not overly spicy, but it definitely had more of a kick than the other two. This also was a bit sweeter than what we expected, though it balanced the spice nicely for those of us who don’t prefer spicy. Someone wanting a spicy General Tso’s sauce might be disappointed, however. General Tso’s sauce has 20 calories per tablespoon and 5 grams of sugar. 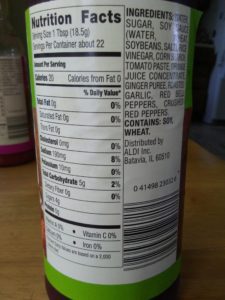 These are all great purchases! We highly recommend each sauce as a good representation of the Asian sauces they claim to be. The flavors are distinct and provide a nice variety of choices. For us, the best part about these sauces is that they are all made from natural ingredients and feature a list I can pronounce!