A nose trimmer is a small but significant tool in the arsenal of men’s grooming. For men — especially those getting to the more seasoned times of life — those pesky nose hairs are more likely to make themselves visible, to say nothing of the ones sprouting out of the ears. Rather unexpectedly, Aldi has decided to sell such a product for $7 as a Special Buy. 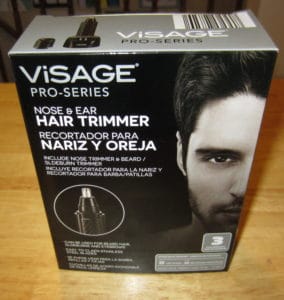 The Visage Pro-Series Nose & Hair Trimmer comes with the main trimmer, a trimmer attachment, a contour attachment, a base, a cap and a single AAA battery. It also includes a manual and a three-year warranty. Setup is basic: unscrew the bottom, install the battery, then replace the bottom. From there, it’s as simple as removing the cap, putting on the desired attachment, and using it. A small light on the trimmer helps provide a bit of illumination. 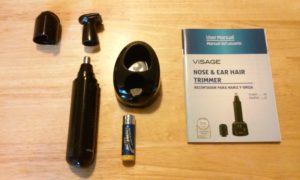 A few observations. One, most of the interior parts, except for the trimmer and contour blades, are plastic, some of it pretty thin. This is typical to most other trimmers I’ve used, but I’ve also found mostly-plastic trimmers don’t tend to last a long time. The manual seems to imply as much when it points out that this device is not made for commercial use. We haven’t owned it long enough to speak to durability, but it does come with a 3-year warranty.

Two, it seems reasonably powerful. The nose trimmer is solid, carving up pesky nose hairs with no problems, and it no doubt does the same to ear hairs. The contour trimmer is adequate, but not overly powerful — it does okay with sideburns, but doesn’t seem to have quite as much power as a sideburn trimmer on a conventional electric razor, and it’s nowhere near as powerful as a dedicated electric beard trimmer. Given that the trimmer is a secondary feature, this isn’t a huge issue, but it may or may not meet your needs as an everyday beard, sideburn, and eyebrow solution.

The Visage Pro-Series Nose & Ear Hair Trimmer is a serviceable budget nose trimmer, and comes with the added benefit of a contour attachment that can help fine-tune some of your more substantial head hair, such as sideburns and beards. It seems better at noses than sideburns, though, and I’m not yet sure how durable it will be, although it does come with a 3-year warranty. And at $7, it’s definitely an inexpensive buy.