EDITOR’S NOTE: As best as we can tell, this is a regional Regular Buy. It may not yet be available in all stores.

With everyone trying to fit into their cutest swimsuit during this scorching heat, Aldi has come out with a Greek yogurt version of cream cheese! I’ll say I was the first to be skeptical that Greek yogurt could replace cream cheese, but with these nutrition facts and prices, how could I decline?

Happy Farms 3x Whipped Protein Greek Cream Cheese Spread is $1.99 for an 8-ounce container (24.8 cents an ounce) with 3 grams of protein and 3 grams of fat for a two-tablespoon serving size. Now let’s compare that to Happy Farms Regular Whipped Cream Cheese, which is also $1.99 for 8 ounces (18.6 cents an ounce) and has a mere 1 gram of protein and 4 grams of fat in the same two-tablespoon serving size.

The only “Greek Yogurt based cream cheese” that I have ever run into is Green Mountain Greek Cream Cheese, which goes for $2.49 for an 8-ounce container (31.1 cents an ounce) at Target and Walmart. The downside to this is that Green Mountain Greek Cream Cheese is only available in select cities. My friend, who is originally from New York City, says she used to buy it all the time, but to her dismay, she realized that she couldn’t find it at any Targets near her in Philadelphia. So she was head over heels when I told her about Aldi’s version, and she said it tasted exactly the same and 50 cents cheaper. Talk about a double jackpot! 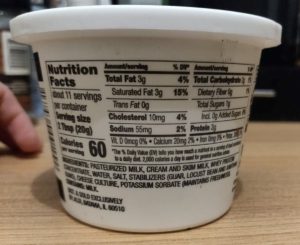 I toasted myself an everything bagel and noticed how airy and smooth the cream cheese was. After I finished spreading it, I licked my spoon and couldn’t believe how amazing this tasted. Now I won’t say that it is spot on for full-fat cream cheese, but it is on the money for low-fat cream cheese. It is not as rich as full-fat cream cheese, but that doesn’t mean that it compromises taste at all. It was so delicious that I had to do a double take on the container and make sure it was actually made out of Greek yogurt. It’s creamy yet a bit tangy like how cream cheese should be.

Do I dare say that this is my most favorite Aldi product? I don’t think I am ready for that kind of commitment since I love Aldi so much, but it is definitely in my top five. I don’t think I would miss regular cream cheese at all with this in my fridge. Now if only I could find a bagel that wouldn’t turn me into a gluttonous carb monster, I’d be golden.

Run to your nearest Aldi and pick up this Greek Yogurt Cream Cheese and thank me later! I have tried both the non-whipped and whipped versions, and both are wonderful. I’m more of a whipped girl myself, but whatever floats your Aldi boat this summer!