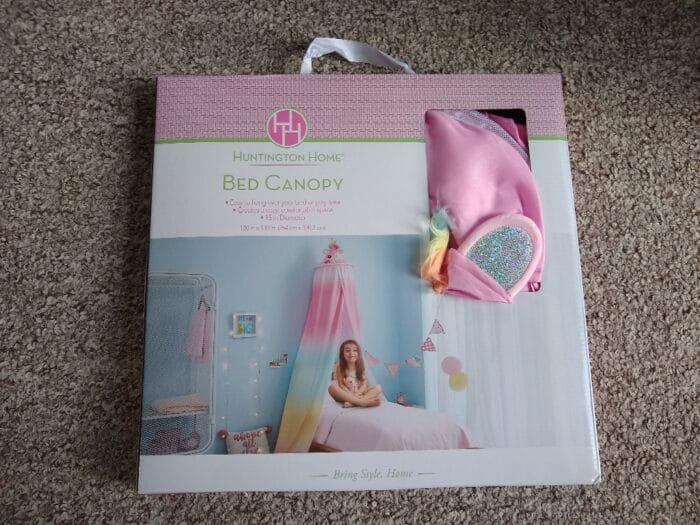 This is an Aldi Find, meaning it’s only around for a short time. The price on the Aldi canopy is definitely lower than other stores. Target sells them for around $45 and the cheapest I could find on Amazon was around $15. The Aldi canopies are $14.99, which is definitely a reasonable price compared to Amazon and Target.

There are four different styles: a blue dinosaur, a pink canopy with pompoms, a unicorn, and a rocket ship. Some of the bed canopies, hooded blankets, and backrests have the same design on them. The description claims that the canopy is easy to hang and has a 15” diameter.

When we got it, I was eager to open it. It came with the canopy, a bag with a hook with a screw on one end, a plastic anchor, and string for if you want to make the canopy longer, and an instruction manual. 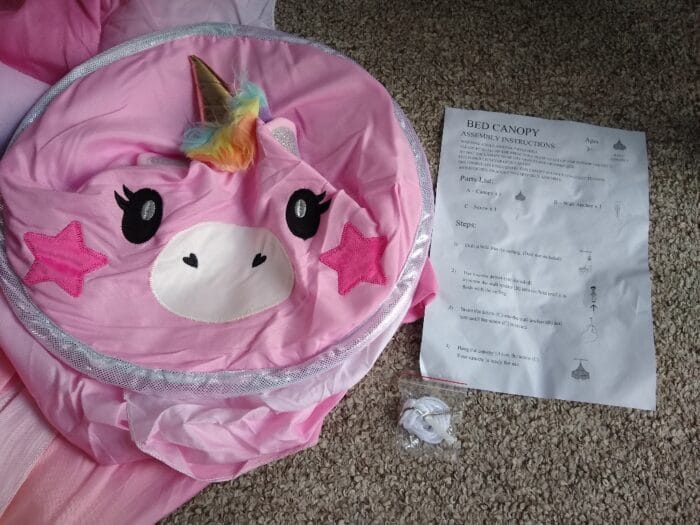 The first thing I noticed is that the canopy was long. I doubt most people will need the string, which we think is for making it longer if you have a high ceiling. In my house, which has a normal ceiling, the canopy stretched all the way from the ceiling to floor, and we had to take a minute or two just to tuck the sides of the canopy behind the bed. Because of that, this canopy probably wouldn’t work with any type of loft bed that’s high up off the ground. 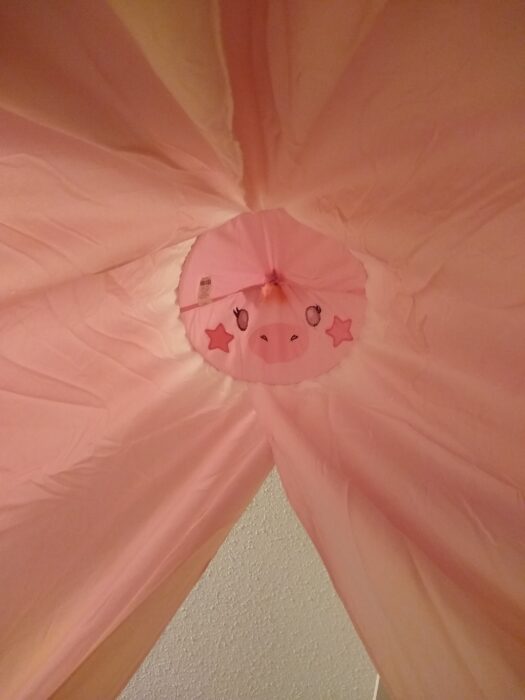 The instructions were straightforward and very simple. The only things you need that don’t come with the canopy are a drill and a screw driver. All you do is drill a hole into the ceiling, screw the wall anchor into the hole, screw the hook into the wall anchor, and hang the canopy. The maximum amount of time it would take to set up the canopy would be about ten minutes. 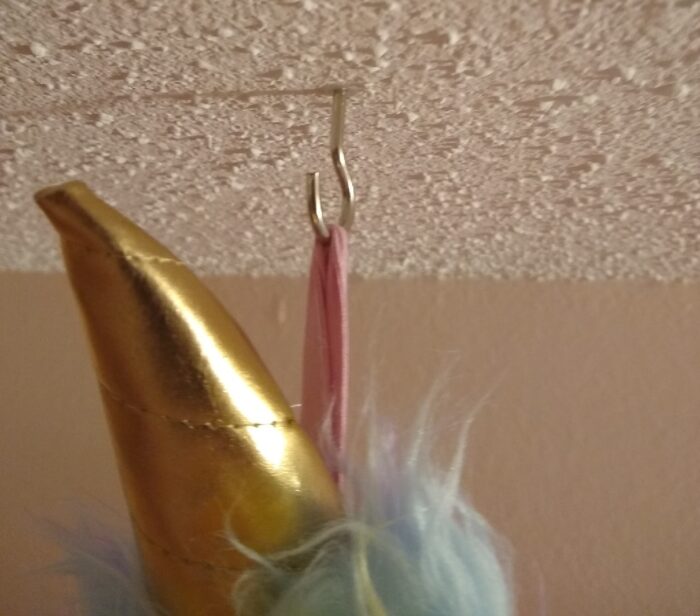 After we set it up, it stayed, and it seemed secure. 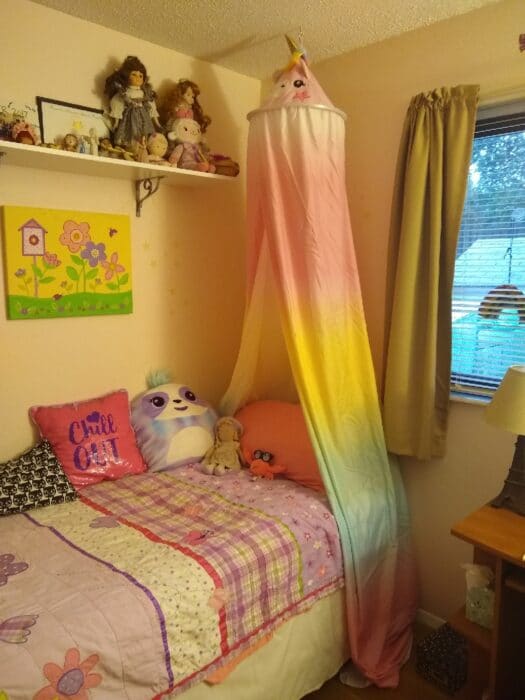 Unfortunately, the next day, just by accidentally sitting on the canopy, it ripped off the loop on the canopy that attaches to the hook. (The anchor stayed in place on the ceiling.) 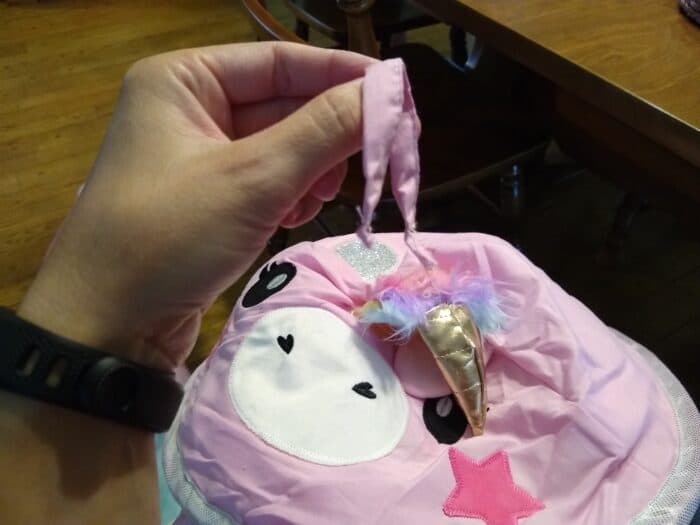 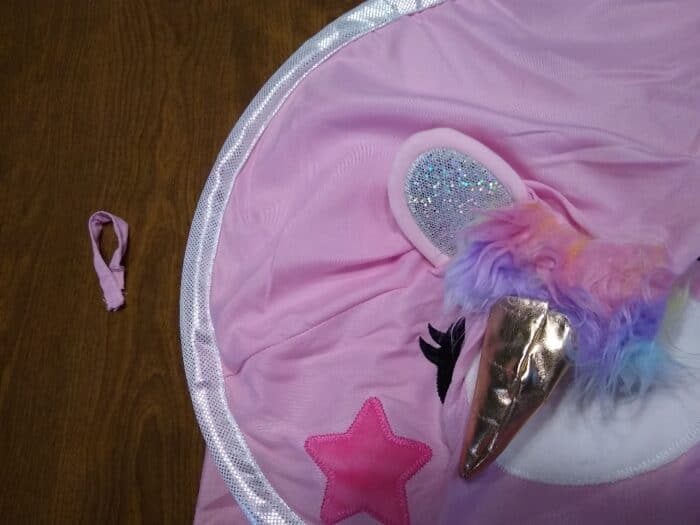 Luckily, we were able to sew it back on, but that shows that it doesn’t take a lot of effort to knock down the canopy. This doesn’t mean the canopy is awful. It just means you should be careful around it and try not to tug or pull on it. But I don’t think the canopy is altogether bad.

Overall I think the canopy is a good purchase. Even though the loop ripped, that could happen to any canopy and we were able to sew it back on. The canopy was inexpensive, it looks cool, and after sleeping in it for two nights I can confidently say I’m happy with it.