Because Aldi is a German company, it’s no surprise that some German products show up on store shelves. The best time to purchase German food at Aldi is during German Week, which happens a couple of times a year. That’s when Aldi sells a limited supply of things such as pork schnitzel, doppel keks, peanut puffs, cornichons, egg spaetzle, and more. But something you can buy all year at Aldi — not just during German Week — is Knoppers. 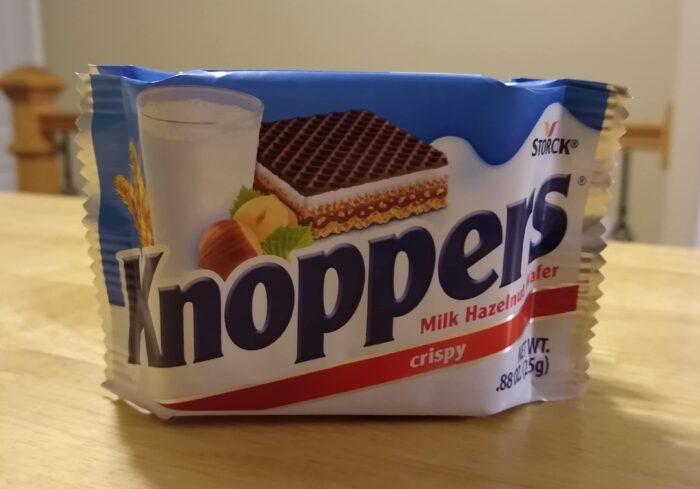 A Knopper is described as a “five layer bar with a milk and hazelnut creamy filling.” Knoppers are like a cross between a wafer cookie and a candy bar. In Germany, they’re marketed as an in-between-meals snack, with ads there stating “nine thirty in the morning in Germany.” Sometimes they’re also promoted as a breakfast food.

Knoppers cost $1.99 for a pack of five wafers at the time of publication. They are not exclusive to Aldi. You may also be able to find them in various forms at Walmart.

Knoppers are made by a company called Storck, or August Storck KG, based in Germany. Storck also manufactures other familiar brands such as Toffifee, Werther’s Original, Merci chocolate, Riesen chocolate, and Mamba fruit chews. Knoppers first appeared on the market in Europe in 1983, and they showed up in the U.S. and Australia more recently. They also have become popular in China during the past few years. 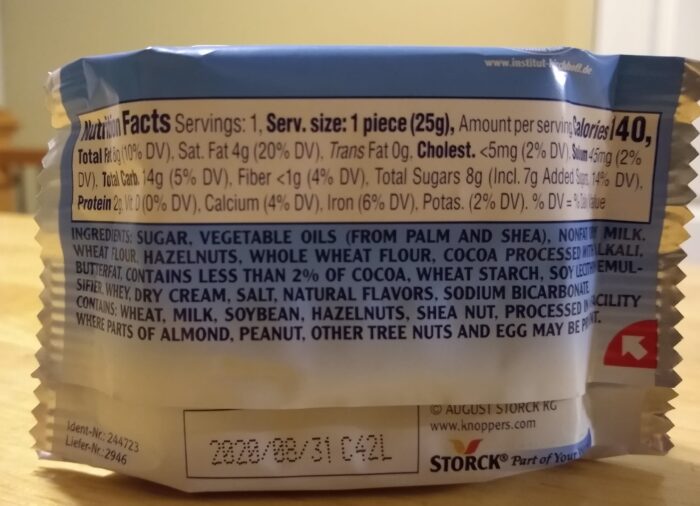 Knoppers pack a lot of calories per serving, with one 0.88-oz. wafer containing 140 calories. They’re purely a dessert, and I wouldn’t classify them as a breakfast food, although they’re probably no worse than most sugary cereals. One wafer has 8 grams of total fat (10% of your daily value), 4 grams of saturated fat (20% DV), 45 mg of sodium (2% DV), 14 grams of total carbohydrates (5% DV), 8 grams of total sugars, 7 grams of added sugars (14% DV), and 2 grams of protein.

The primary ingredient, not surprisingly, is sugar.

People with allergies should also be aware these contain wheat, milk, soybean, hazelnuts, and shea nut. They’re processed in a facility where parts of almond, peanut, other tree nuts, and egg may be present.

After seeing Knoppers on the shelves in Aldi’s candy and chocolate section for years, my family finally tried them this past year. Their small size made them good Christmas stocking stuffers, and I think Aldi even sold smaller fun-sized Knoppers in large bags during the holidays. My family generally liked them. One regular-sized bar is filling, with a nice crisp texture and smooth chocolate, hazelnut, and creamy filling. They’re something I’ll likely buy again for holidays or special occasions.