When it comes to personal hygiene products at Aldi, the selection is pretty lean, even by Aldi standards. Things like toothpaste, shampoo, and deodorant come in no more than one or two options, and many of them are name brand at that, so the cost savings versus other stores isn’t very good.

When it comes to soap, meanwhile, Aldi stocks precisely one option: a moisturizing soap bar aimed at women. Men certainly can use that soap bar, of course, but in an era when more and more companies are creating soaps and body washes aimed at men, Aldi doesn’t present much for guys to be excited about.

It was a surprise, then, to see Aldi roll out a body wash aimed for men under its Lacura line, which up to now has been known for … well, more women-aimed facial cleaners and creams. 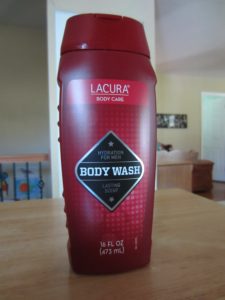 It comes in two varieties: a Hydrating Body Wash and a Sport Body Wash. The Hydrating Body Wash is 16 ounces, while the Sport Body Wash is 18 ounces. Both run $2.49. This is considerably less, in our experience, than most comparable name-brand body washes, but is also a little more than, say, Suave, or some of the alternatives you might get at the dollar store. It is about the same price as Target’s take on men’s body wash.

That said, we’ve found that not all body washes are created equal; some of the really cheap ones can be watery rather than a gel, which not only makes it harder to build up a lather but also leaves me feeling like I didn’t really save much money after all. On the other hand, some of the more expensive body washes (like Irish Spring) tend to have a much thicker consistency, which makes it much easier to work up a lather either on a washcloth or even directly on one’s body.

We tried out the Lacura Hydrating Body Wash. It doesn’t try to compare itself to anything on the packaging, but the color scheme and design scream Old Spice, which is, coincidentally enough, currently Aldi’s only men’s deodorant. Our initial impression of the Lacura Hydrating Body Wash is that — like its cost — it fits somewhere between the cheap stuff and the expensive stuff. It’s thicker than some of the bargain-basement body washes out there, but it doesn’t come out quite as thick as some of the expensive stuff. It’s thick enough, though, that it makes for a competent body wash. It smells good, too. Also of note, the bottle it comes in is easy to open and close.

Lacura Men’s Body Wash is a respectable, if unspectacular, entry into the Aldi personal hygiene line. It performs about at cost, better than cheaper body washes but not quite up to snuff with some of its more expensive name-brand counterparts. That makes it a decent choice if you’re looking for some quality in your body wash while still saving some money. Because it’s currently a Special Buy (ALDI Find), this is something you’ll only find during certain times of the year.