Aldi is known to occasionally sell flashlights. In the spring, it often sells a compact 160 lumen flashlight, just in time for camping season. On the other end of the seasons, Aldi will sometimes roll out a larger, 300 lumen flashlight, usually in the fall. 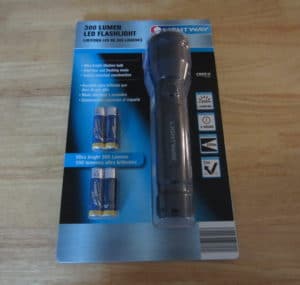 Despite not having a manual, it’s not really hard to assemble. You unscrew the bottom, insert the AA batteries, screw the cap on, and you’re done. Two of the AA’s go one direction, while two go the other; those instructions are on the inside of the flashlight. 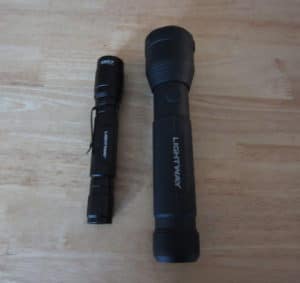 The LIGHTWAY 300 comes in a heavy-duty metal casing, and has a substantial feel when you hold it. It’s not compact, but it is a small-to-medium sized flashlight, measuring nearly 8 inches long and weighing about 12 ounces with the batteries in. Unlike the LIGHTWAY 160, the packaging on the LIGHTWAY 300 does not indicate any water resistance, so we’re not sure this is something you want to accidentally drop in the water.

As for the flashing? We assume it’s supposed to be an emergency light, but it’s more of a strobe light. Unless you’re trying to host an outdoor dance party, it’s awful to look at, and we are legitimately concerned about whether someone prone to seizures from flashing lights could have problems with it.

UPDATE (July 2019): After two years of use, including a number of camping trips, the flashlights continue to get the job done. In addition, during some testing of Aldi batteries, we’ve since discovered that the flashlight lasts a lot longer than advertised on a set of batteries. More on this in the future.

The LIGHTWAY 300 is a serviceable enough handheld flashlight. It’s bright and sturdy, and is good for those who want something bigger than a compact flashlight but smaller than a full Maglite. There are some drawbacks — no warranty, no information on water resistance, and a pretty awful strobe light mode — but overall this seems a decent value for the $9.99 price tag.