Kale is probably not the first vegetable that comes to mind when you think of pizza toppings, but the folks at Aldi would like to change your mind with Mama Cozzi’s Take and Bake Kale and Ricotta Deli Pizza. Kale is a divisive ingredient: some love it, some hate it, others merely refuse to try it. My family loves kale (yes, even the kids), so I recently picked up a box and gave it a try. It cost $4.79 at my local Aldi in the Midwest. 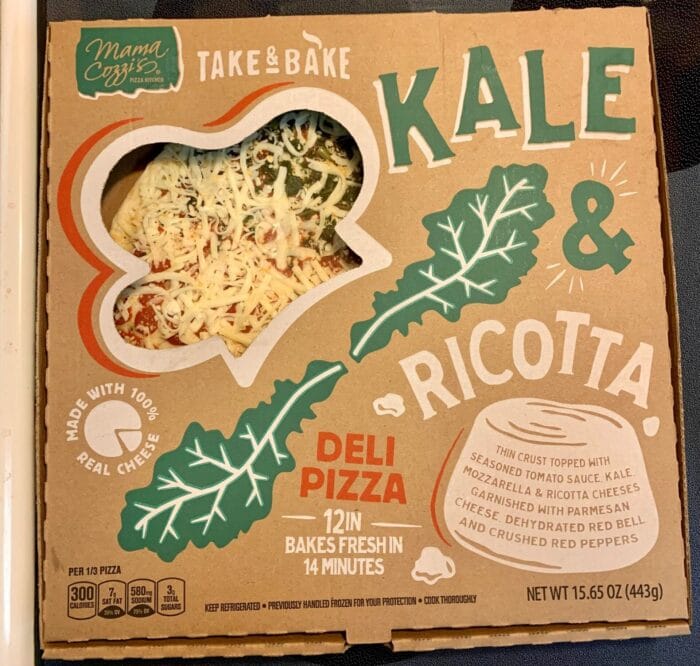 The pizza is 12” in diameter, contains 3 servings, and weighs 15.65 ounces, which is smaller than many of Aldi’s take and bake pizzas. The box describes the pizza as a “Thin crust topped with seasoned tomato sauce, kale, mozzarella and ricotta cheeses, garnished with parmesan cheese, dehydrated red bell and crushed red peppers.” The description is slightly misleading, which I’ll explain below.

This pizza is an Aldi Find, which means it’s only in stores for a short time. Aldi does not offer online ordering for its specials after they sell out at your local store, so if you want this pizza, don’t delay. 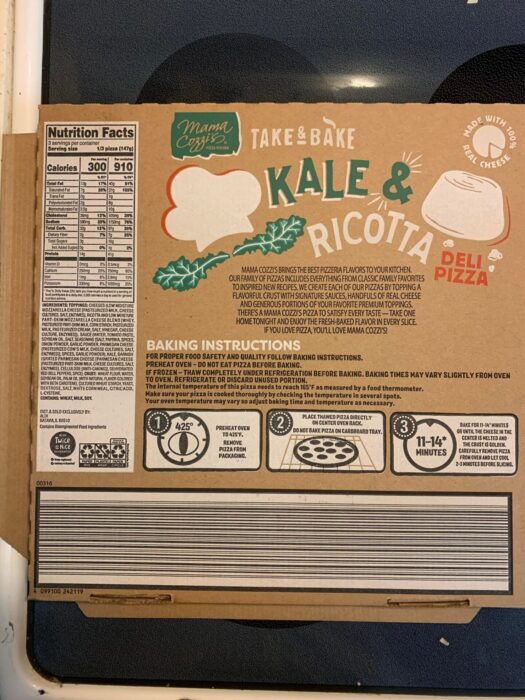 Mama Cozzi’s Take and Bake Kale and Ricotta Deli Pizza. The back of the box. (Click to enlarge.)

To bake the pizza, preheat your oven to 425 degrees Fahrenheit. The directions say to place the pizza directly on the oven rack (after removing the packaging), but I used a nonstick pizza pan that I bought at Aldi a few years ago. Bake for 11-14 minutes or until the cheese in the center is melted and the crust is golden. Since I used a pan, I baked mine for 17 minutes, but my oven also runs a bit cool, so I recommend following the prescribed baking times and adjusting as needed. 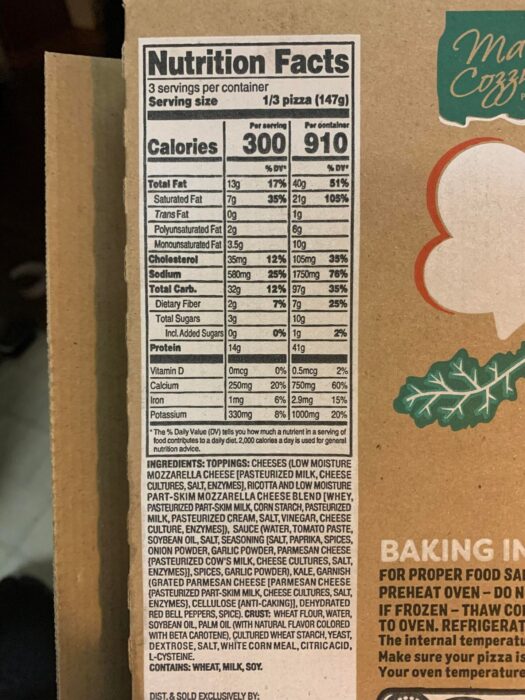 Each serving contains 300 calories, 13 grams of fat (7 saturated), 35 mg of cholesterol, 580 mg of sodium (25% of the daily recommended value), 32 grams of carbohydrates, 2 grams of fiber, 3 grams of sugar, and 14 grams of protein. The ingredients list includes wheat and dairy products as well as preservatives.

When I removed the pizza from the box, I noticed that the kale wasn’t well distributed but fell on mostly one side of the pizza. It was under the cheese, so I couldn’t redistribute it before baking. I also noticed that the ricotta “garnishes” were rather small and scarce. They looked like a sprinkling of miniature marshmallows. 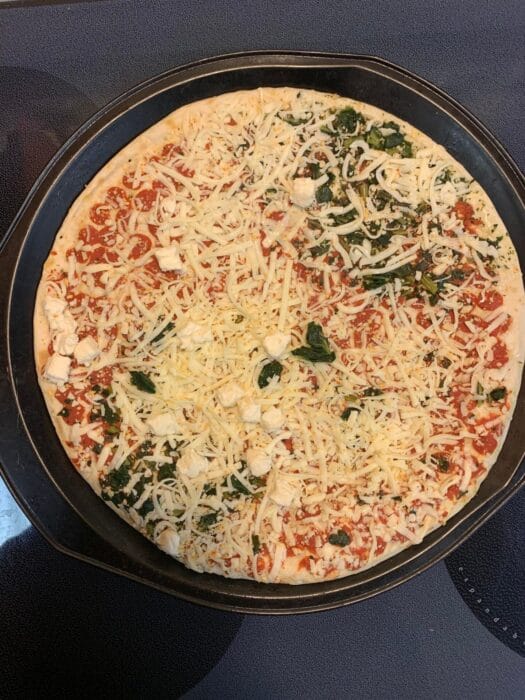 The pizza, ready to bake. The kale was not evenly distributed, and there’s not much ricotta.

I didn’t get a picture of it out of the oven because we were hungry and forgot to take one, but when cooked, the ricotta “garnishes” melted slightly. However, even after melting, there was not enough ricotta to significantly cover the pizza. It’s an accent rather than a primary ingredient, making the pizza’s name a little misleading.

The pizza does have a very thin crust, so it is not as filling as a thicker pizza. We divided it among the four of us so we could each taste it, but one pizza would not have been enough for all of us if it was our only food for a meal.

The pizza had a nice crispy crust and a very flavorful sauce. The cheese was good, despite having less ricotta than expected. The kale was… well, I have good news and bad news. The good news is, if you hate kale, you’ll still like this pizza. The bad news is that if you like kale, you’ll be disappointed.

The kale was very soft, lacking that trademark kale chewiness, and the flavor was masked by the sauce and cheese. Three of us said we didn’t taste any kale at all, while the fourth person claimed to taste it “slightly.” Even the pieces with the most kale didn’t taste much like kale.

All of us enjoyed the pizza and would eat it again. Interestingly, we didn’t see or taste the “dehydrated red peppers” described on the box either. For us, this was basically a delicious, if basic, thin crust cheese pizza.

My family enjoyed Mama Cozzi’s Take and Bake Kale and Ricotta Deli Pizza, despite the lack of ricotta or much kale flavor. It’s a good thin crust pizza and recommended if you’re trying to get more greens in your diet but don’t want to taste them.