Skip to content
Home Features How Will Aldi Deal With the Inflation Problem?

How Will Aldi Deal With the Inflation Problem? 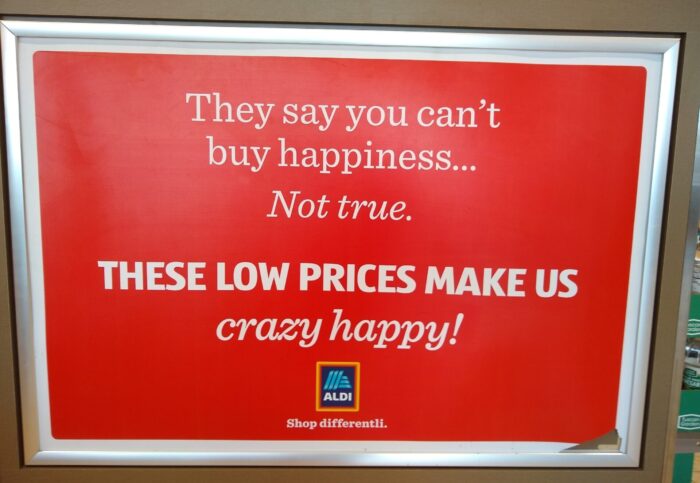 … but how long can they last?

EDITOR’S NOTE: We realize that some people may have strong opinions about the subject of inflation, especially as it relates to politics. It is not our aim to tread into those politics, but rather to talk about an issue that impacts Aldi shoppers in a real way. To that end, we ask commenters to be mindful of our community guidelines. We reserve the right to moderate comments, including those of a political nature.

We’ve written often about the supply chain problems that have bedeviled the retail industry in 2021. Nearly every store has suffered serious problems getting products onto their shelves. Aldi, for example, has been forced to scale back its weekly ad in response to Aldi Find shipping delays.

The reason for these headaches relates to the course of the pandemic. Many companies scaled back production or paused operations in 2020, either because of safety worries or because consumers weren’t buying as much. In 2021, shoppers returned to pre-pandemic spending habits, putting a strain on an economy short on labor and products.

The problem threatens to stretch well into 2022 or longer, forcing companies to reckon with the fact that they can’t easily meet consumer demand on many things. As I write this, the world is headed into the winter holiday season — the busiest shopping time of the year — with shoppers and retailers alike wondering if shoppers will be able to get their Christmas presents on time.

The Problem of Inflation

Shortages tend to drive prices up, and the shortage of both products and labor have produced what is known as inflation. In simple terms, inflation is defined as a increase in the price of goods and services; goods are products like milk or video games, while services are operations like subscriptions or repairs. Inflation is the result of a decline in the purchasing power of money, and that decline can have many causes. Fifty cents, which could buy a movie ticket in 1950, can’t even come close to that now.

Inflation isn’t all bad as long as it’s predictable and as long as income keeps up. Home loans, for example, get easier to pay off because people make more money but the loan value doesn’t go up with inflation. It’s even possible that some products are more affordable now than they used to be.

But when inflation goes up suddenly, the sticker shock creates real headaches for people not ready or equipped for it. That’s what’s happening in 2021. Prices on many things — gas is the most obvious example — are higher, and while some experts say it may be temporary, it’s not yet clear how or when inflation will end. Pay is up, too, but not across all sectors. For those people whose pay hasn’t jumped in the last year, these new prices are an unwelcome problem.

If you’re an Aldi shopper, you’re no doubt wondering what this means for your beloved Aldi products. Will we see prices go up in stores? Will the grocer keep prices steady but then shrink the size of the product?

We can’t answer these questions for certain. Even Aldi itself may still be trying to chart the best course in the midst of an uncertain situation. But we can guess on a few things based on what we know. After all, Aldi, like all retailers, has been dealing with inflation — if with less urgency compared to now — over the course of its existence. This may be a more unique kind of inflation, but we still have some history to work with.

Here, then, is what we think.

1. Aldi will almost certainly do all it can to delay passing along inflationary costs to consumers.

Aldi has consistently ranked as the #1 grocer for lowest prices. It’s no exaggeration to say that winning on price stands as the biggest reason the supermarket is so successful. It’s more important than fast checkout experiences or its middle aisle. Shoppers come to Aldi because they can get most things cheaper there than they can anywhere else without sacrificing much in the way of quality.

Simply put, Aldi can’t afford to let other grocers beat it on price. The German grocer knows this. To get there, Aldi has waged a cutthroat price war against other grocers, and it’s a war it has pretty consistently won. Even now, with prices rising, the grocer intends to keep winning that war.

We strongly suspect that, in the short term, Aldi will do everything it can to delay passing increased costs along to shoppers. In other words, while prices on groceries and other items might go up some, consumers won’t bear the full brunt of price increases right away. For Aldi, that may well mean that the company actually loses money on the sale of some goods, especially lower-priced ones.

You may wonder how can Aldi remain profitable if it is losing money on products. The answer: the same way that companies make money on Black Friday. All of those doorbusters you see big box stores lay out on the day after Thanksgiving are just a tool to get shoppers in the store to spend on a whole bunch of other stuff. In business, they call these money-losing products loss leaders. They end up being a net profit for the company because although everyone comes to the store for the products that lose money, they leave with a bunch of products that make money.

Aldi shoppers, it seems, rarely leave without buying more than they planned on. The middle aisle and other Aldi Finds take care of that. The supermarket figures that as long as it can make an overall profit on each departing customer, it can afford to lose a few cents on canned tuna.

2. Aldi’s privately held status will give it an advantage over publicly traded rivals.

It’s important to remember that the German grocer’s competitors are dealing with the same inflationary pressures Aldi is. The problem is that many of them have another pressure to deal with, and that’s stockholders. Walmart and Kroger, for example, are both publicly traded companies. Publicly traded companies sell shares of stock, and with stock comes stock owners who want to make money off of their stock. When companies choose to offer stock, they have to deal with potential backlash from shareholders who aren’t making as much as they want.

Aldi doesn’t sell stock. (Trader Joe’s doesn’t, either.) It doesn’t have to make shareholders happy. That gives Aldi a distinct advantage in that it can think long-term rather than short term. The company already has leveraged this advantage in its aggressive growth strategy, and it can afford to do so here. If Aldi makes less money than before, it doesn’t have to worry about stockholders staging a revolt. Walmart and other publicly traded companies have to sweat that problem every time a quarterly earnings report comes out.

3. Aldi will likely have to get creative.

Even with its many advantages, Aldi still will aim to make a profit. Losing money is not good for any company, especially with one spending so much on building new stores and remodeling existing ones. For Aldi, that doesn’t necessarily mean keeping prices flat; it just means staying one step ahead of the competition, whatever that looks like.

Aldi, though, may have to do other things to stay in the game. It might mean changing product size. It might mean cutting back or eliminating certain products, especially those that are both in low demand and are not profitable. It might be about changing suppliers on certain products in hopes of finding someone who can deliver goods more cheaply. It might also be about streamlining or rethinking distribution or how it uses its workers. The grocer already does these things regularly — it’s an incredibly efficient operation — but the grocer might have to get more aggressive in those areas now more than before.

There may, too, be other tricks Aldi has up its sleeve. We already know it is looking into ways to cut costs at the checkout aisle. It may have other initiatives in the pipe we don’t know about.

As the lowest-priced grocer in the United States — and in other countries, too — Aldi faces serious pressures with ongoing supply chain issues and increasing price pressures. But other grocers face these same problems. The German supermarket has long shown it has the tools to win on price, and it will no doubt continue to use those tools even as its competitors may have no choice but to raise prices. Consumers will probably feel some of it, but because Aldi wants to keep those consumers coming, it will likely do what it can to insulate shoppers from the worst of it, at least for now.

That, we suspect, will prove a winning formula for Aldi continuing to earn the hard-earned dollars of its devoted customer base.