Several years ago, a franchise called Papa Murphy’s showed up in our area. Not to be confused with the other Papa, Papa Murphy’s is different from most other pizza places in one major respect: they don’t cook the pizza for you. Instead, you buy a pizza, take it home, and bake it yourself. The upside to these “take and bake” pizzas is they are hotter and fresher than a pizza would be had you hauled a cooked one home in your car or had a delivery guy get it to you.

Aldi sells pizzas of all kinds, both as year-round Regular Buys and limited-time Aldi Finds, and both in frozen form and as take and bake pizzas. Mama Cozzi’s Take & Bake Supreme Extra Large 16″ Pizza is a Regular Buy, which means you can find it in stores all the time, located in the refrigerated section. At the time of this post, the pizza sold for $5.99. Given the size of the pie and the fact that it’s take and bake, I find it to be a solid price. I’ve certainly paid more in other grocery stores for smaller frozen pizzas. 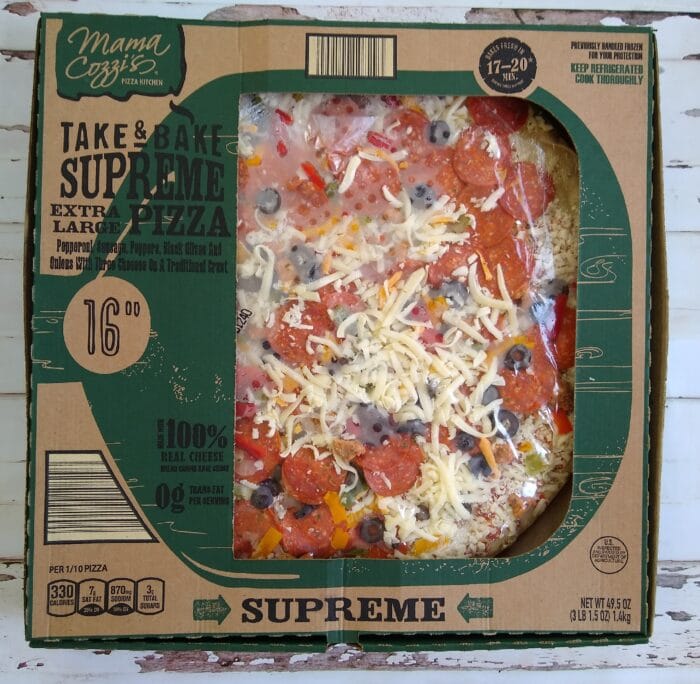 As a take and bake, it should be kept refrigerated until you cook it. You’ll also want to cook it by the expiration date, which can be found on a sticker located somewhere on the box.

To bake this particular pizza, the instructions say to preheat the oven to 375 degrees. Then, place the pizza directly on the center oven rack. (Do not, under any circumstances, bake the pizza on the cardboard tray.) You cook the pizza for 17-20 minutes, or until the center is melted and the crust is golden brown. You then carefully remove the pizza from the oven and let it cool for 2-3 minutes before slicing. 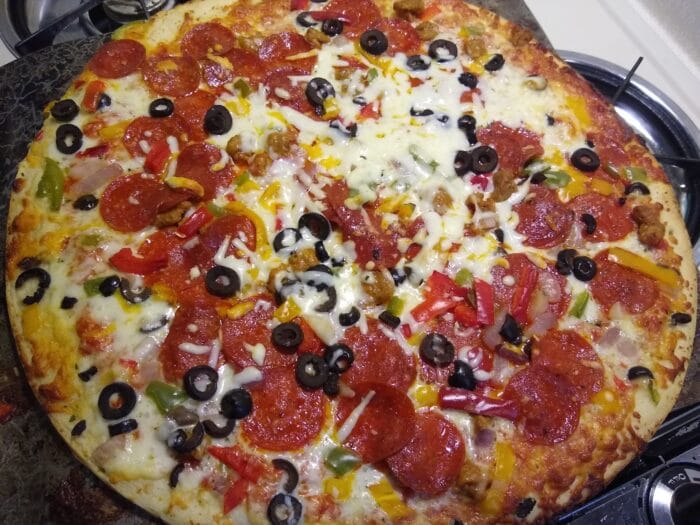 A couple of considerations regarding baking. One, we cooked ours on a baking sheet because we wanted to minimize the oven mess. This makes the crust a little less crisp but also keeps the oven cleaner. We do have a crisper pizza pan with holes that we use for some pizzas, but this pizza is too big for our pan.

Two, keep a close eye on this pizza in the oven, especially if your oven is small. Our oven is a wall version that isn’t very large, and because this pizza is large, the left and right edges of the pizza can overcook if we’re not careful. To help keep that from happening, we usually rotate large pizzas like this one. With this pizza, we rotated it 90 degrees about halfway through cooking.

Our family loved this pizza. The crust was great, and the toppings even better. Our kids are not supreme pizza fans, but both of them ate multiple slices. I’m not always a fan of grocery pizzas, even ones from Aldi, but this one was superb. It’s one of the better pizzas I’ve had from a grocer, and one I would happily buy again. 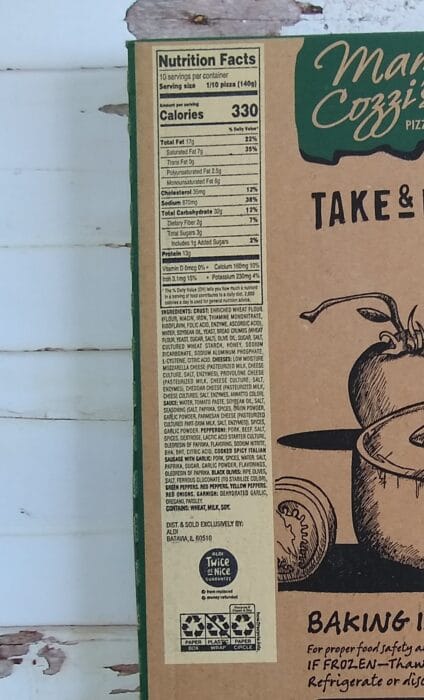 We found this take and bake pizza to be an excellent pie, with superb taste and tasty ingredients. Our family ate it up. The price is also fair given the size and the fact that it’s a fresher take and bake. We’ll likely buy it again.