I’ve always been a fan of cheese, particularly as a snack. When I was a kid, my parents would sometimes go to the local deli and get slices of cheese — pizza cheese was a favorite — just for snacking. Even as an adult, I freely admit that I like snacking on cheese, including as part of lunch or even dinner.

The most economical way to get cheese is in blocks, where I can chop it into cubes for later consumption. But when I need cheese for lunch away from home, I can’t easily beat string cheese, which comes in prepackaged wraps. Aldi recently recognized its string cheese as a fan favorite in the kids category, but I don’t think you need to be a kid to appreciate string cheese. 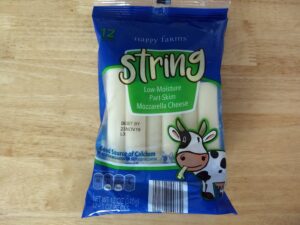 Happy Farms String Cheese is a Regular Buy, which means you can find it at Aldi all the time. It can be found in the store’s refrigerated section, and it should be kept refrigerated at all times, including if you put it in a lunch box. As I mentioned, it comes in two varieties: a mozzarella version and a spiral mozzarella-cheddar version. Both are packs with individually wrapped cheese sticks inside.

The cheese sticks are pretty easy to use. Each comes in a wrapper with a soft flat lid on top and a soft bed that the cheese stick sits in. To open the wrapper, there is a little tab of separated plastic at the top that you use to peel the lid and bed apart. I’ve opened many of them, and I’ve seen kids do the same, and in all instances these are consistently pretty easy to open, at least in my view. So, unlike some cheese packaging, this appears to be a winner.

One negative is that the cheese packaging is not recyclable, so if that’s a concern for you this probably won’t be the product you want.

We’ve tried both the mozzarella and the mozzarella-cheddar and we like both of them. The string cheese peels easily off the main stick, and both of them taste good. The cheese can sometimes be slightly on the dry side, but that’s part of the trade-off to make sure the cheese doesn’t create a mess in your hands, which it thankfully does not. In fact, the packaging describes it as low-moisture. Overall, though, the taste and texture are good.

Nutritionally, each stick is about 80 calories, with 6 grams of fat, 20 mg of cholesterol, and 200 mg of sodium. Each stick has 220 mg of calcium, which is about 15% of your recommended daily amount. The ingredients are relatively few given the processed look of the cheese: it’s a low-moisture part-skim mozzarella cheese made of pasteurized part-skim milk, cheese cultures, salt, and microbial enzymes. It does, naturally, contain milk. 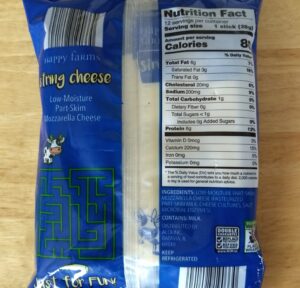 Nutrition and ingredients. There’s also something for the kids to do if you don’t destroy the packaging upon opening. (Click to enlarge.)

If you’re looking for an easy way to put cheese in a lunch box, this is a pretty convenient option. The sticks are easy to open, easy to eat, and they taste good, too. You’ll pay a little more for the convenience than you will for a cheese block, and the wrappers aren’t recyclable, but if you need something simple to pack for a kid or an adult, these fit the bill. Recommended.