One of my peeves in the grocery store is how much sugar is added to foods such as yogurt, cereal, applesauce, and oatmeal. It’s easy to eat too much sugar during the first meal of the day, and some people are surprised at how high the sugar content is for many breakfast foods because they’re not considered dessert and yet they contain as much sugar as many desserts.

For years I’ve made oatmeal from scratch using Aldi’s Millville Rolled Oats because I avoid excess amounts of sugar. Unless I make it ahead of time, though, it’s not always ideal for busy mornings because it takes time to prepare. Aldi has sold traditional instant oatmeal packets for as long as I can remember, and while they are quick and convenient, I avoided them because of their high sugar content. Then I noticed that Aldi has quietly begun stocking its shelves with lower sugar instant oatmeal. 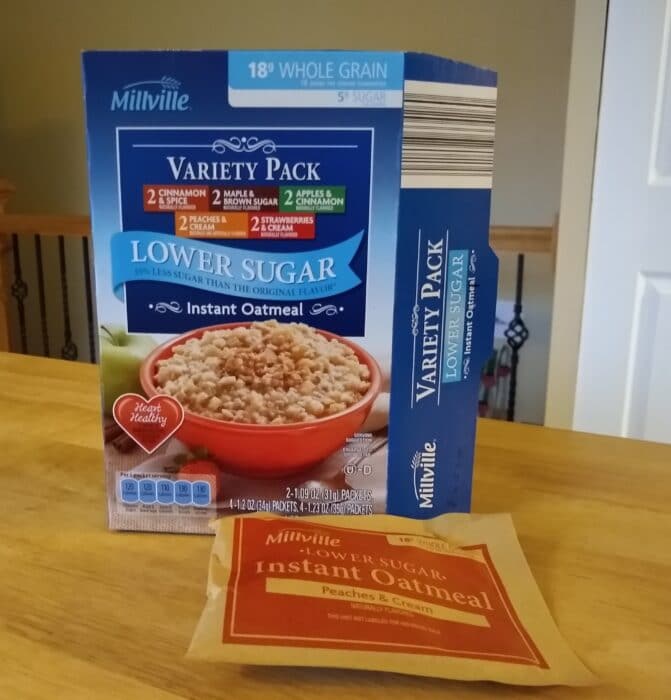 Millville Lower Sugar Instant Oatmeal is $1.69 at the time of publication for an 11.92-oz. box containing 10 oatmeal packets. That comes out to just under 17 cents per serving. The box says the oatmeal contains 55% less sugar than the original oatmeal flavors, with sugar content being lowered from 12 grams to 5 grams. (Some of the flavors even have just 4 grams of added sugar.)

Flavors include two each of cinnamon and spice, maple and brown sugar, apples and cinnamon, peaches and cream, and strawberries and cream. The individual packets are not all uniform in weight, with the box containing two 1.09-oz. packets, four 1.2-oz. packets, and four 1.23-oz. packets. 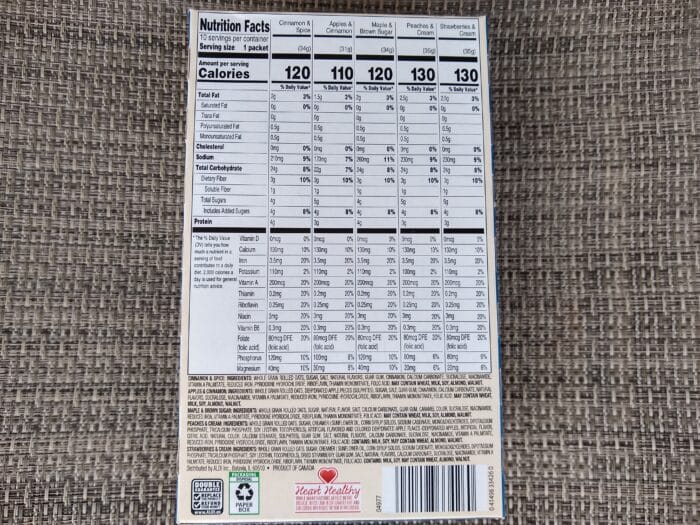 The primary ingredient is whole grain rolled oats. Oatmeal packets are by definition a more processed food compared to oatmeal made from scratch, so they do contain ingredients such as natural flavors, gums, and corn syrup solids.

Depending on what flavor you choose, allergens include wheat, milk, soy, almond, and walnut.

The easiest way to prepare instant oatmeal is in the microwave. To do so, empty one packet into a microwave-safe bowl, add 1/2 cup of water or milk and stir. (I found that 1/2 a cup of liquid makes a very soupy oatmeal, and I prefer to use a bit less, more like 1/3 cup of a cup or just over 1/3 of a cup. The oatmeal does thicken some if allowed to sit for a while, though, so it’s not the end of the world if you use the full recommended amount of water or milk.) The box states to microwave the bowl uncovered on high for 1-2 minutes or until oatmeal begins to thicken, but the individual packets also contain directions and say to microwave for 50 seconds. I generally find that 50-60 seconds gets the oatmeal plenty hot. After heating, carefully remove the bowl from the microwave and stir.

You also can prepare it using the “kettle” method, in which you empty an oatmeal packet into a bowl and add 1/2 cup of boiling water or hot milk and stir, then let it stand for 2 minutes before stirring again and serving.

To my family, the lower sugar oatmeal tastes as good as the traditional packets of instant oatmeal. My kids like picking a different flavor each morning, and they like all of the flavors, so there are no duds here, although they are partial to strawberries and cream and peaches and cream. By opting for this reduced sugar oatmeal variety, we don’t feel like we’re missing anything, except unhealthy amounts of sugar in our breakfast.