My husband and I are not wine drinkers, but we were intrigued when Aldi announced it was bringing Festive Collection Wine Advent Calendars to its U.S. stores. We were more intrigued when we learned each store would get a very limited supply of calendars. Some people speculated each store would get only a dozen wine calendars. My husband and I knew there was a strong likelihood these would sell out quickly, perhaps in a matter of minutes once stores opened for the day.

We set our sights on Aldi’s Happy Farms Preferred Cheese Advent Calendar, slated to hit stores on the same day, knowing that we would actually eat the cheese and that these calendars were less likely to sell out so fast.

We wanted to see what a typical Aldi store looked like on the morning of November 7th, when both the wine and cheese calendars went on sale. We strategized. My husband would have long been at work by the time Aldi opened at 9 a.m. I had to get the kids off to school, which meant I couldn’t get there before the stores opened. I would have to make the best of it.

As it was, I made good time. I pulled into Aldi’s parking lot around 9:04 a.m., and while the lot was pretty full, it didn’t seem much busier than a normal Wednesday morning when lots of people typically are eager to check out new Special Buys (ALDI Finds).

I walked through the store doors at 9:05 a.m., just five minutes after the store opened. I glanced toward the conveyor belts and registers and noticed three or four people carrying large boxes — they were the much-awaited wine Advent calendars. I saw a handful of other people walking around the store with the boxes in their carts, finishing their shopping after they had gotten their hands on the hot item. The store did not seem more crowded than usual. I would have taken photos of all the happy shoppers waiting to pay for their goodies, but I didn’t want to appear creepy.

Instead, I asked one the guys in line, “Where did you get the calendars?”

“Over there around the corner,” he said, pointing to the Regular Buy alcohol section in the farthest aisle. “But they’re all gone. Sorry.”

I thanked him and wandered over to the alcohol aisle. Sure enough, there were no wine calendars. Not even a price sign or any trace of where they had been. They were just gone.

I strolled along the aisle, moving farther back in the store, and I got to the Special Buy refrigerator section, where a store employee was directing a customer to the cheese Advent calendars. There were still at least a dozen cheese calendars. Success!

I selected a calendar, then snapped a photo of the remaining calendars in their native habitat on the store shelf. 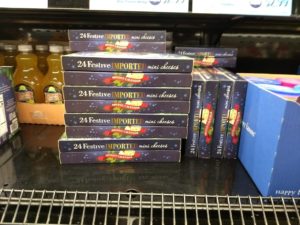 I picked up a few other items around the store and wandered back over to the cheese calendar area around 9:30 a.m. to see how many calendars were left. It looked like only two or three had disappeared since I’d gotten mine about twenty minutes earlier.

At the checkout aisle, I asked a young cashier if they had a lot of customers show up before the store opened to get the wine calendars. He said they had people right away in the morning, but he was unclear if people had lined up very long before the doors opened. I didn’t get the impression that it was anything like a Black Friday crowd in terms of size or aggressive behavior.

He confirmed the wine calendars had sold out within minutes of the store opening, and he claimed “one dude bought a whole case” of the wine calendars. I said, “Wasn’t there a limit of one per customer?” He replied, “That’s what I thought, too.”

Now, the wine calendars consisted of large boxes, so I’m not sure if the employee thought one calendar constituted a “case” because it looks so big or if someone actually did purchase multiple wine calendars against Aldi policy.

By the afternoon of November 7th, I had friends sharing how their Aldi stores had posted signs saying they were out of both the cheese and wine calendars. Other people who are members of our Aldi Reviewer Discussion Group page on Facebook claimed their local Aldi stores had not gotten the calendars yet.

Friends were also sharing links to ebay, where Aldi’s $69.99 wine calendars had been exorbitantly marked up, with sellers asking approximately $125 to $260 or more. Others pointed out, as a consolation, that World Market sells wine Advent calendars and that Target will be selling a cheese calendar this holiday season.

Now that we know there is real demand for Aldi’s wine and cheese calendars, it remains to be seen whether Aldi will sell them again — and in larger quantities — next year. It is clear there is a market for these products.

In the meantime, I’ll be over here enjoying my cheese calendar.