In the summer, Aldi starts selling products associated with college life: desks, backpacks, mattresses, and even futons. These products are all about creating a home away from home where a student can sleep, study, hang out, and essentially live, at least until it’s time to pack up and return home for the summer. (It’s worth adding that many of these dorm-themed products can also be put to good use outside of college life, either in the office or at home.)

Part of the college life formula is, of course, eating. Every living setup is different, but sometimes cooking surfaces are inadequate or even nonexistent. In those cases, it’s nice to have a means to do more than just use a microwave.

Enter the hot plate. It’s not quite as robust as a kitchen range, but it can be used to heat things up when you need it. And Aldi sells one. Fair warning, though: not all colleges and locations permit hot plates, so you might want to check with your local institution before hauling one off to your dorm room. 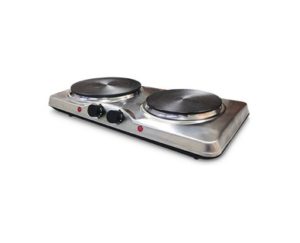 Here are the features as given by Aldi:

Despite the fact that Aldi has been selling these hot plates for a long time — and apparently selling a similar, if not identical, hot plate the last few years — there are a number of things we don’t know. We don’t know, for example, who manufactures the double hot plate. We haven’t tested it, so we can’t speak to performance, or ease of use, or durability.

Also, we can’t find the manual for any of the Ambiano hot plates; the only one currently on Aldi’s site is the Kitchen Living Double Hot Plate from 2014. Hot plates aren’t terribly complex devices, though, so this probably isn’t a major issue.

Have any experiences with this hot plate? Feel free to let us know in the comments.